Love the sight. I am a newbie but hey i just got in my BL 36 and loving it . Not loving my 7 amphour sla(Great for the money). I want more speed ugg it is addictive. . Also I want to be able to park the bike and not worry about Charging right off the bat. Also I just dont have enough range. I am thinking of 48v 10amp hour. It is hard for me to understand how much more range that ill give me . But hey they do great for the money.

I was thinking of LIFO but not a guy that can replace a cell. Are they plug and go?? For me they look a little tricky. Sam with YESA sent me some prices. THEy are not So bad yet . I am just not sure if they are the fit for me.

So it leaves me to NIMH .... Can i build one and save any money? I like to be able to build them and have the flexability of doing what i want . Different volts and amp hour. My idea was to build 12 volt packs . with multi chargers. Just though it would be the simplest way to Build , Charge, Pack the weight.

Give me some advice.

Well, that depends. What cell size would you build it out of? Do you have access to or be willing to build a small spot welder? Do you have the patience?

The super cheap cells are not as expensive as LiPo but they aren't cheap, either.

I was going to go the same route as you for my skateboard, actually. I looked at a few cells. My cheap little 24V 10AH set up was going to cost me about $130 just for the bare D cells, and mind, the only reason I was considering it was because the cells were so cheap. I ditched the idea when I found out the cells suck.

D cells are the easiest way to make a pack, but they are not the cheapest way. My pack probably would have cost me upwards of $300 if I chose to use decent cells.

As far as I can tell, the cheapest way to get into NiMH is to use AA's. There are issues with this, though. To get the Ah you want, you'd need to have several packs in parallel. While not really an issue during discharge, charging them in parallel will cause some of the cells to fry. You'll need to charge the packs one at a time or with multiple chargers.

If you really want a NiMH pack, you're going to have to work at it.

You still have to mess with the packs, but lithium almost ends up being cheaper! On top of that, lithium should last you much longer than NiMH!

Hmm, why does this look wrong? Can somebody check to make sure this is right?

Well . I dont have a spot welder. And I got to much time on my hands. But i was going to use the Tenergy cheap D s . Which would be less than 200 for the cells . However, I am not certain they have the discharge rate i want. So after that the better Ds or even the nice F cells were next. At those prices it was not much more to go ahead and buy a pre made pack.

Also. I went to golden moter web sight they have a 36 volt 13 ah pack for around 300 plus shipping. But i have no idea of they are good or junk.

For your skateboard they also have 24 10 ah i think for 230 plus freight . Now how much freight is i have no idea but coming from china i would guss 60 to 80 bucks.
I have sent them a email about freight on a 36 volt pack when i find out i will update..
Thanks for the info.

How'd you know I was gonna use Tenergys for my original pack, too :p?

You're right, though. The Tenergys suck. They barely do 1C.

I don't know about the quality of their packs so I can't speak.

I'm going with lithium for my skateboard. Seeing as A123 cells from DeWalt packs only cost about 1% more than good NiMH cells, it really was a no-brainer.

If you want (and have a little techie knowlege) you could build your own tab welder fairly cheap.
http://endless-sphere.com/forums/viewtopic.php?t=2633
These guys'll help you out ;).

Some time ago I'd found a like to an inexpensive spot welder design, linked from here: The Poor Man's Battery Tab Welder

Thanks for the info. Hey i have seen you post some stuff on here. You sound like you know some stuff. Ie I am clueless.
What do you know about lifepo from Yesa or golden moters.

OHHHH also If i went the self built pack what type of cells would you go with ?

I believe YESA's cells were of high quality. They are one of the big names in LiFe. The other ones I can think of off the top of my head are LiFeBatt and A123 Systems (the DeWalt pack guys). I don't know about Golden Motor's lithium.

I'd do a price comparison first. Pretty much any of the three I've listed will do what you want, assuming you get a suitable pack. Lithium is good stuff. How good just depends on how much your willing to spend ;).

Are they pretty simple to work with as well. LIFEthat is ...

Depends. The larger cells (such as YESA and LiFeBatt's) have provisions for attaching power leads, chargers, etc. and the BMS (battery management system) comes with the packs.

A123's cells are more difficult to work with. They don't really sell in small quantities for reasonable prices, so the only viable way to get them is to use DeWalt's tool batteries. Unless your application draws less than 10A, you have to disassemble the packs and attach your own leads, bypassing the BMS. Then you have to worry about draining the batteries too low. Remember, this is the good stuff, so the voltage curve is nearly flat. I've heard the end of their discharge curve is so steep that it feels like something broke. Run it flat even once and you could very well destroy the pack. The other option is to leave everything intact, and parallel the packs. This will mean you don't have to worry about attaching your own BMS, and the pack will cut itself out before a really deep discharge can do any harm. A123's are THE best LiFePO4 currently out there, but you'll have to work for it.

The larger format cells are easier to work with. If you don't have experience with this sort of thing, premade packs are the way to go. Really, the only reason go through all the trouble of working with the A123 cells is for high perfomance vehicles, or just to say you have the greatest around.

Word of caution: Do NOT screw with these packs. While they are no where near as dangerous as the earlier chemistries of lithium batteries, they still are capable of arc welding anything that contacts their terminals. And as with any battery, don't break or pierce them. Other than that, they should happily serve you for years to come.

I don't see me building a lifepo4 pack. I would fell ok getting my feet wet building a NIMH pack but if i went with the lifepo say 48 volt 10ah I would just a pre made pack.

I like goldernmoters pack for price and it looks like it comes in a case. Just a open pack with bms taped to the side is a bit scary. I emailed the Goldenmoters to find out if they do come in the shown case or was that just a pic or something. 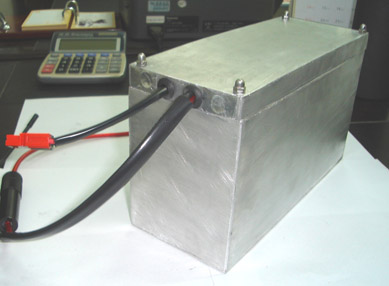 Might, but will it fit? And does it come with a charger?

I have to ask: Do you live in like, Europe or something? Because it's 4:00 in the morning as I'm typing this. Still up watching Death Note. That show's crazy :O...

I think it is about 560 fob China. With Charger .
Heck no i live in little rock ar. Just cant sleep either.
I need to go the sell forum and just try to buy some Used NiMH

Alright, see what you can find. If it's from sombody here then it _probably_ isn't crap.

Mmm, one more episode...so sleepy...but must know what happens to Light...

EDIT: That was the most awesome anime I've seen. Evar!!

Would be great if i could get a email back from the GOLDMOTOR folks. Have yet to reach them. I might have a old email addy or something.

They also sell NIMH 36 volt 13 ah for 278 fob china. But again doesnt matter since i cant reach them .