Anyone Ever buy from this LIFEPO4 ebay supplier?

Hi,
I did not read this particular forum topic before committing to and receiving batteries from Li Ping through eBay. I ordered 2 sets of LiFePO4 24V 12Ah. On trialing them today, after packaging, charging and wiring them, every time any resistance is offered the batteries stop supply.

Power can be turned on to the controller and throttle, if the rear wheel is lifted from the ground the motor will run. As soon as the wheel comes under pressure from a hand or from contact with the ground power is lost to the throttle and the switch must be toggled back to on.

When all intermediate components (controller and throttle)are removed and a direct connection is made between battery and motor things get worse and the batteries stop supply within a blink of an eye.

Fuses (20A) have been installed on + (pos) between the battery and controller they are not blowing. The +(pos) does not run throught the BMS board however the - (neg) does.

Anyone with an answer. I would prefer not to - (neg) bypass on the BSM board as this would seem ill advised as it would also remove battery protection against current overdraw.

I have sent an email to Li Ping and am awaiting a reply. 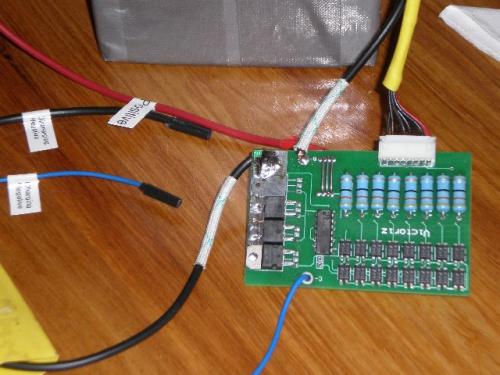 here are some photo of non duct tape cells which withstand 50 Amps allthough they have only 7.7 Ah (24V)- Amita Cells - Welldon make.

I think I will wait another 6 montsh before buying my 40-60Ah 36V pack because I need 175 A and those duct tape packs look dangerous.

"No! This table reserved!"

Perhaps she meant the table was reserved for people who drove there in an SUV ;)

Another person I know of is also waiting for a pack from newjourney on ebay with no news yet, and they are still posting packs for sale. The same pack.

here are some bigger cells capable of handling up to 80 Amps- any experience on that?

Duct tape doesn't necessarily make something a bad battery pack. It does make it look kind of like a bomb though. I just ordered a 48v 20AH pack from Li Ping. he is customizing the shape to fit my battery box, and setting the BMS for 2C so it can handle 40 amps continuous draw. He also told me he filed a complaint to ebay on "Anna" for copying his listings. He maintains his stuff in in the same league as YESA, who he says is a reputable dealer. I am going to do a full report here on the 48v 20AH pack after it arrives, which weighs in at 20 pounds, and measures approx 6 X 4 X 14 in my custom size-about the size of 3 12V 12ah BATTERIES. If that pack performs as advertised, I will almost triple the range of my 30 MPH Lashout scooter with Powerpack motor set up, and weighs 8 pounds less than 4 small 12V 10Ah batteries. There should also be a performance gain, as a fully charged pack is about 6V higher than 4 lead acid batteries.
By the way, I told Li Ping people equate duct tape with a lower quality product. He told me he doesn't use shrink wrap because of the type of cells used. Something about a soft shell as opposed to a hard shell. He is looking into other ways to make the packs look less like something you'd never be able to get on a plane with.

I bought the Yesa 48V 12 AH pack from Jeff here. it couldn't keep up with the demand on my Lashout though, which draws a real continuous 35 amps at 48 Volt when its going 30 MPH (which is most of the time I am on it). The YESA pack works great on another scooter I had built, a 1200 watt powered modified Xtreme X 500 with front suspension added. For some reason, the 1200 watt brush motor doesn't over draw it, even though it is a pretty powerful motor.
Andy

I'm almost ready to buy some batteries. For my application, the price of lifepo4 from ping is about equal to sla. I could buy 12 6v hr9ah sla delivered for about $250. This weighs about 36lb. These battery are rated at 18amps for 15minutes. They deliver about 5ah @ 72v 20a. The ping 5ah 72v lifepo4 would cost me $250 delivered w/ bms and chargers. But perhaps a 5ah ping would not put out my needed 20a continuous. So I suppose I'll get 2 36v 10ah packs. These will occupy the same space as my sla. I think I will ask for the higher amp bms to hopefully avoid cut-out problem. It would appear that all lifepo4 batteries are not even close to being similar. Like the amps output and input. Ping definately not an a123 cell....I could spend over $500 on 4 a123 packs, and have 66v 4,4ah. and I was looking at emoli packs from v28 and v18. Still an awful lot of money for a little ah. I looked at cyclons 5ah, but rating only 12amps for 15min. And I figured out that I could sqeeze 72v of the 4.5ah hawker cells into my upper battery compartment. and I did find a great price on them. But I think the power rating is only about 24w per cell for 15min rate. And I could see that the hawkers 4.5ah or 5ah would only actually deliver 3 - 4 ah at this rate. So might as well get some ping battery. It will certainly rock if it works. At the very worst, I would have a bunch of 5ah lifepo4 to play around with. And the beautiful duct tape will fit right in to my duct tape electric bike. I put my duct tape through every extreme abuse. It passed with flying colors! My battery did not fall off! I know it looks bad to some people...This whole thing is an experiment.
Wishing you all many happy productive deep battery cycles...Oh, and the sla battery don't last that long, and it sure is heavy. lifepo4 would certainly make a big change there. Troublefree...that's what I'm shooting for. I'm getting real close... 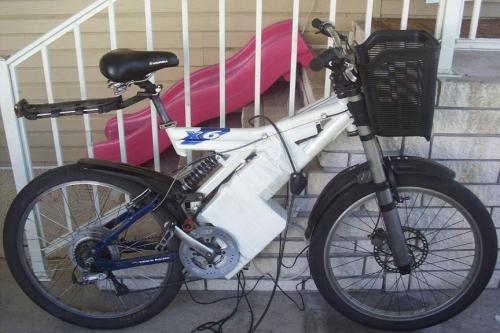 what type of motor is on your bike pictured above?

So if you find a diamond wrapped in duct tape you'll ditch it in favor of the nicely presented cubic zirconium (or whatever that naff diamond like replacement is)? Part of the trouble with this market is "appearances" and "suppositions" rather than hard data.

Add to this a willingness to extrapolate from experience at Chinese restaurants to the entire Chinese business community and it makes me think someone needs to re-examine their perspectives.

Ping was true to his word and immediately sent off C2 tested BMS boards. They arrived Friday, took 2 minutes to unsolder the C1 boards and attach the new.

We took two identical bikes out Saturday on the Waburton Rail Trail . One bike with 2 x 24V 12Ah SLAs and an 80kg rider and the other with 2 x 24V 12Ah LiFePO4s and a 55kg rider. The 2 SLAs were flat after non-continuous powering on a gradient at its greatest 1:40 to 1:50. Only 1 LiFePO4 was used and it still had power left and took less than 4 hours to charge with a 24V/2Ah charger.

On Saturday I had not intended to really test the bike but the train stopped because of a points problem and I had things to do. I took some extremely steep roads home, and whilst on the steepest I was able to have a discussion with a pedestrian whilst pedalling hard. I made it to the top and onwards home. I had done the same trip on 1 SLA battery and run out of battery on this hill and had to pedal with the dead battery weight the rest of the distance.

I still get your normal 24V12Ah performance which should be no surprise.
Having changed the location of the batteries from their previous pannier position to lower within the bike frame has been a success. I have an ornamental left arm (looks real, is real but doesn't really work) which doesn't change gears or operate the rear brake reliably hence the battery location is important for stability and braking.

We are about to embark on a weeks bike touring holiday, with all camping gear onboard, early tomorrow. Only the LiFePO4 batteries are making the trip. The SLAs are holidaying in the garage and only one of us (me!!) is relying on Battery Zoom for this trip.

I'm now entertaining my 36V14Ah bike getting a present of LiFePO4.
:-)

From reading this ping seems far more knowledgeable and responsive than new.journey07 on e-bay, - I really think new.journey07 and anna are the same seller, the ads are worded the same, some of the photos of the batteries are the same. I have still not received my batteries yet. If I ever do I will let everyone know, right now I am requesting a refund.

Dear Don, Tyler, and all the other bitter domestic battery resellers who frequent this board:

Don't take it personally, but everyones a little tired of the rhetoric. Most people are checking out this forum because they AREN'T interested in your $1000 solutions. (ie. They don't have that kind of money to spend/waste).

Everyone knows that buying foreign (everyone say CHEAPER) products involves some inherent risk. The point of this forum is to mitigate that risk as much as possible buy demonstrating a track record for the different resellers.

Coming on here and claiming that all battery packs produced off US soil are of poor quality is laughable at best. In the end, cheap foreign labour will always win out, and foreign distributors will find ways to improve the cosmetics of their products. What we want to know is their ACTUAL TRACK RECORD. And in that department you have nothing constructive to add. I think you are wasting a lot of time if you seriously believe for a moment that anyone here wants a "Lifebatt" or any other such product for the 6 figure salaries out there.

(P.S. Any who agree, please feel free to say so - maybe in this manner we can get through to the car sales types on here.)

Don't take it personally, but everyones a little tired of the rhetoric.

Please don't speak for "everyone". I like people who have something to sell posting here. How better to find out what's available and give direct feedback. Maybe even a little troubleshooting from time to time. How cool would it be if we had Vectrix, Zap, and Greensaver reps around here right now answering questions? As long as people identify themselves, post in the correct areas, and behave the more the merrier.

Any who agree, please feel free to say so - maybe in this manner we can get through to the car sales types on here.

It sounds like what your aiming for is a forum where all people think the same way. Not only would that be boring it would be useless.

So Don, Tyler, and others welcome. Bring it on. Yes you will take some guff from time to time, but in the end I believe that both you and us will profit from it.

Kinda missing my point I think. I'm not opposed to these guys posting in the forums, just on this thread. You'll notice the title - let's keep content relevant, instead of having to dig through mountains of sales pitches and ignorant speculation.

All who actually have bought one of these and had success, or no success are more than welcome. 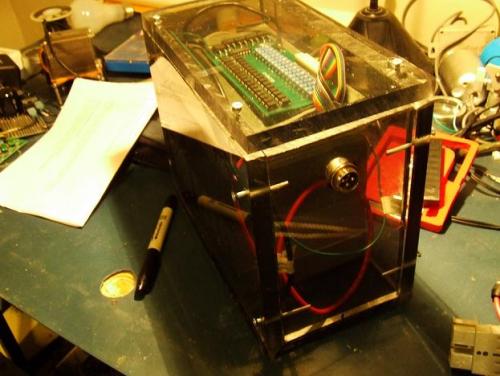