The Z-20 requires a 60V battery pack right? What is the minimum amp hours needed to get a decent range (25 miles) with LiFePO4? Would a 60V 20Ah pack be sufficient? This pack would cost $1400 bucks.

Tell me the answers dear gurus of electricity...

I can sell you Usd1000/set for TS 60V40AH LFP cell,I don't know the motor efficiency on Z-20,but on my scooter it could range 80mile....see attached LFP power 2500W scooter to New zealand 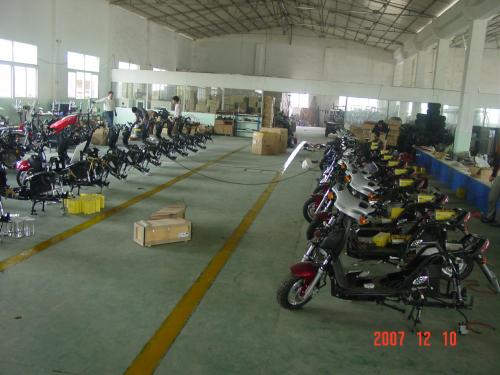 Can you post pictures of those cells? Also, can you provide details of the TS model number of the individual cell?

There have been mixed review of Thunder Sky (TS) cells. Some have been happy with them - some haven't. Like most things one tends to hear more from those folks that have been unhappy with them. Furthermore - most folks agree that the C-LiFePO4 batteries are better for high power use than the LiFePO4 batteries that TS make. However, I have to think that even TS LiFe cells will be better than the standard lead acid batteries supplied as standard.

But I would still recommend you to go for 2 sets (40 Ah), to get extra range, reduce the discharge depth you use, and get more available power - less voltage drop at high currents. The available power depends on the internal resistance, some people have reported high resistance on Lifepo sets they bought online. The capacity in Ah is there, but only if you use it slowly. You might want to check with other people's experience of the supplier before buying.

It finally depends on whether the 25 miles figure is your daily commute or your nominal range target. Maybe you never drive longer than 10 miles, but want some spare range just in case.

Hi Mountain Chen I MAY be interested in your $1000 60volt/40AH battery pack. Do you know if this will fit on a EMAX setup for 60volts ?? Do you have any pictures of the setup in one of your scooters and how many cells is it ?? Also how much would the chargr cost ?? Thanks for any info. God Bless :) 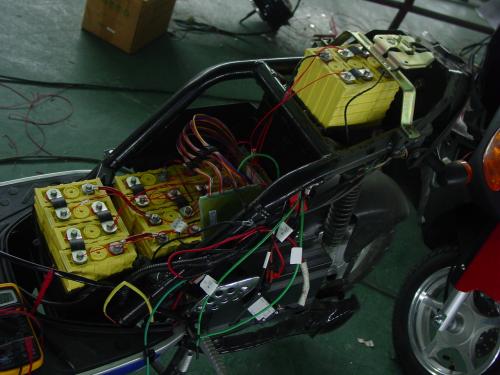 Hi Mountain chen, thanks for he pictures. I am counting 15 cells to this pack is that correct ?? If so, is this then less than 60 volts as are not the packs rated at 3.2-3.7 volts ?? Either way $1100 for a 60volt/40AH pack with charger is an excellent deal. I will probably be contact you after I get my tax refund early next year. I wonder why more people are not purchasing this from you ?? God Bless :)

Are you sure these are LiFePO4? I looked at the spec sheet, and it certainly didn't make that point clear, it just said "lithium ion" at the top. If they are LiFePO4, they're quite a bargain, and I'm sure the community here would be interested to see how well they work for you. :)

Thunderskys are lithium ion cells. The generally accepted nominal voltage for Li-ions is a bit higher - 3.7 with 4.2 volts used to charge them. They have mixed reviews. The 1000-to 3000- cycle life is a bit hard to believe.

The Z-20 requires a 60V battery pack right? What is the minimum amp hours needed to get a decent range (25 miles) with LiFePO4? Would a 60V 20Ah pack be sufficient? This pack would cost $1400 bucks.

Tell me the answers dear gurus of electricity...

This would not be sufficient unless you ride slow.

@JDELUNA : You're right, nominal voltage for LiFePo4 is 3.2V, so this is a 48V battery system, unless batteries are missing in the picture. 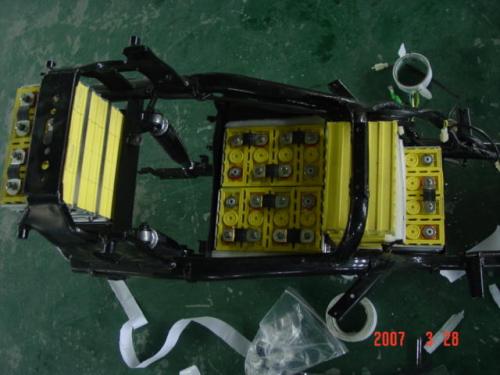 Does that system come with any form of BMS?

I presume that's an FOB price? Do you know how much shipping to Ann Arbor, MI would cost?

By sea transportation is very cheap,less than 100dollars.

19Cell BMS is under improvement.

19Cell BMS is under improvement.

Does that mean that there is no BMS with this system? If so, then is it OK just to wire them all up in series?

Do you know how this pack would work with the XM2K controller? I'm wondering about high voltage and low voltage cut off problems.

Mountain chen, $100 shipping, so basically for a TOTAL price of $1200 we can receive here from to the USA a 19-cell 60volt/40AH Lithium battery pack. Will this battery pack work well with the Emax TURBO button that uses approx. 73amps for 2 minutes at a time ?? Even without a BMS this is an excellent price !!! Please let us know. Happy New Year and God Bless :)

the lfp40AHA batteries are rated for 120A continuous dishchare with 200A for 3sec.
The ones i recieved were defective, high internal resistance, but are being returned under warranty. The Australian distributor: www.evpower.com.au , has good customer support. $1200US for a pack this big is good, but ull need a bms.

hope this is helpul,

Did you need specialized equipment to test the internal resistance of these cells? Or did you discover the high resistance through decreased performance of the cells?

I just sent an email to electricmotorsport.com inquiring about using a BMS with these cells.

The 10A charger will costs another 120dollars.

We limit the high charging Voltage to be 75V so that it would be workable on XM2000 controller.

I think it is not problem for E-max too,but E-max is 48V system and 15cell would be suitable....

I just sent an email to electricmotorsport.com inquiring about using a BMS with these cells.

John - Just so you don't get upset if they don't respond right away, I believe that Electric Motorsport is closed this week for a holiday pause.

FWIW, I have ordered SLA BB EB batteries from them and have received excellent customer support.

My understand is that if you want to assure you are really getting a nominal 48 or 60 volts under higher discharge rates - equivalent to the lead acid pack being replaced, you need 16, not 15 cells for a 48 volt pack, and 20, not 19 cells for a 60 volt pack.

This number of cells also allow you to use your original lead-acid CC-CV charger.

How did you distribute your 15 cells in the e-max's four battery boxes?

PJD,
its times like these i wish i took a picture before i pulled it apart again.
Heres a drawing of it i made.
the bms i was using had a module on each battery, which made them too tall. the front 4 were actually slightly too tall to start with. i got around this problem by adding a 20mm spacer under each side of the seat support bar. My setup also allowed me to retain one of the original batteries, so i could do a 60v mod. i was going to rewire the contactors so i could switch between 60v and 48v. 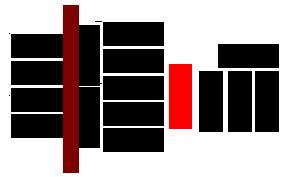 in hind sight, you are probably right i should have had 16 cells instead of 15. on the first charge the bms halted the charge process as one of the cells voltage had become too high. This could have been what caused the cells to fail, however the bms halted charge once the first cell approached 4.2v, as per specification. so we're still figuring this one out. The standard silicone batteries seem to have a very high charge voltage.

jdh2550_1,
I discovered the high resistance by a large voltage sag when i first used the bike just after installation. i could pull a max of 36A before the controller would do a low voltage cut out at 38v (2.5v ave per cell). i then tested at a lower draw using the cycle analyst on my emax and the head light to determine a second reference point for voltage sag. from this i calculated the internal resistance of the entire pack to be 0.25ohms. I then measured cells in groups of two with my battery analyzer off my old emax, and a 0.8ohm 10watt resistor. The whole pack had high resistance rather than just one cell, which indicated a manufacturing or charging fault. Ive seen personally two thundersky packs that are in service, and have been for some time operating at specification, so im certain this is a one off. date code on the cells was 2nd october 2007.

mountain chen,
the emax can be run at 60v as long as the capacitors in the controller are upgraded. Actually they dont need ot be if run only for a short time, but they will fail quickly as they are rated to only 63v. which reminds me i should probably do that shortly, ive been running on 60v since taking the thunderskys out.

XM2000 low voltage on controller is 52V,20cell would cause 2.6V for each cell,no good for battery life.

19cell is more reasonable for half a year testing.

Todd from electricmotorsport replied that they don't use a BMS with the TS cells they use. But that they do use a balancing charger.

Mountain - if I were to go ahead I would buy just the cells from you (no charger and no BMS). Some questions: