The Zapino XR was revealed in a presentation for the investor ideas conference. No specs were given but it looks similar to the EFun-d. Here's the slide photo and link. 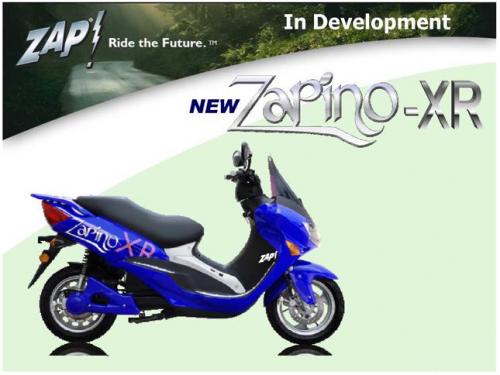 It also looks similar to the upcoming XM-3500.

I suspect that once again we will see lots of similar chassis with at least two or more different manufacturers. I can confirm that the EFun-D is made by different folks than the XM-3500. I've no idea who makes the Zapino XR.

Looks pretty though, doesn't it?

My ZAPINO only 15mile range after 2 months....how come the range of such big and heavy XR with lead acid batteries ?

I am pretty sure this model will be made by the E-Fun folks...

I believe that it is being made by Mountain Chen. It looks identical to his new VK2008.

I don't know who is making it either, but if you guessed based on this picture only, I think it is more likely made by E-Fun because it shows the 3000W hub motor.

Yes, I agree with David - more likely E-Fun (who make the Zapino) rather than E-Rider (Mountain Chen). As David notes - the hub motor pictured above is physically smaller than the 3500W motor on the XM-3500 / VK-2008 / Paladin.

In this thread: 13” full rim motor scooter It looks like a "ZAP!" on the fairing. I don't know what this means. :?