Well, it looks like I am going to take the plunge and get my first electric vehicle after all. It's been a long time coming ( I'm 66 years young now!) I rode in a home converted electric car a few years ago and I've been looking at every electric motor that isn't presently being used, as a potential for something to ride on.

A buddy came by and gave me this brand new Kollmorgan hub motor last week. I was hoping someone could give me advice on how to hook it up and get it's full potential out of it without spending too much money. ( I want to see if it meets my expectations before I go the money route with it.)

Let me describe it's features:
The tag on it says serial # T01B0011. Model # 00H3B414001. Volts 24. It weighs about 8 pounds. Diameter is about 8 in.
Width + about 3.5 in. without threaded parts for the sprockets ( one on each side ). Total width sans axles is about 4.5 in.
Cover held in place by 6 small round head Allen screws. Turns much more freely in only one direction ( that would be clock-
wise from the cover side.) I think I recall it has 36 spoke holes. The two wires exiting it through the axle look rather small to provide much power (what do I know? ) They measure actually .080 inch including the insulation.

Can anyone on the forum tell me what I have, what should go with it, and how can I make a lot of work around solutions to get a prototype going without spending too much? Many thanks in advance!

Just one more thoughtfor the creative among you out there: I live near a plant that makes magnetic tapes ( Magnox is the name ), and I was wondering if some of that powder mixed with a resin could be turned into custom permanent magnets to make a cool motor? Maybe possible, but motor temps might cause them to melt?

Wow, sounds like something completly new! we want pics : ) The only kollmorgon ebike motor I've seen is driven through a chain and external planetary gears. Never seen a koll hub motor. If its a brushless DC motor then there's a few controllers that should work, but maybe worth contacting kollmorgon to see if they have matching controller?

Newber here again--
Wow! I had some pics up in a comment, but clicked the wrong thing and "Poof!" all gone! I'll try again. The Koll hubmotor is a close out thing in a house-cleaning inventory over at Kollmorgan. My buddy works there and got it. He says there are no specs, literature, or schematics left on it. I think it's been there several years. I'll put up some pics of it now. Thanks for your help and interest in it. 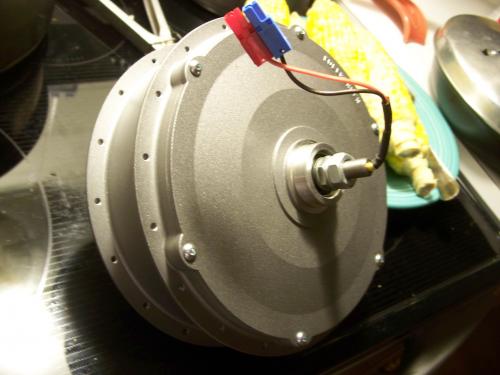 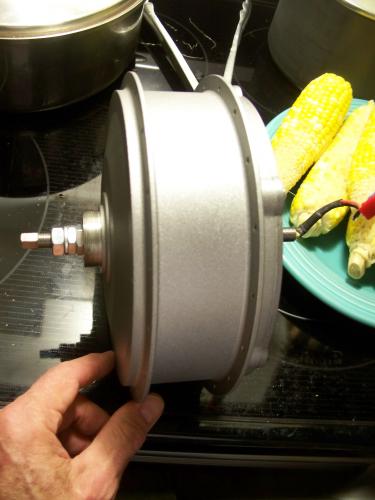 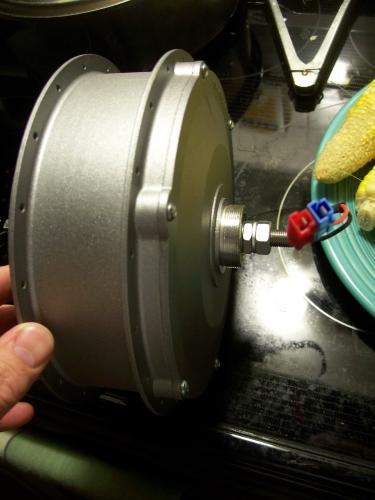 Looks interesting. If it were my motor I'd be tempted to open it up and see what's going on inside. It looks like it only has two input leads, which would suggest its a brushed motor. You could just hook up two 12 volt batteries in series and see what happens, if its a brushed motor then it will spin. But I would think that carefully opening it up would be the safer option, that way you'll know exactly what it is.

It's quite a bit later now(weeks/months.) I took a chance and opened up the motor to see what's in there. Wow! New things. There are 5 or 6 magnets about the size of a THICK silver dollar. Very powerful too ( it was hard to get the cover off. Had to pry it.) The two leads go to two brushes each. All the brushes are on the same side of the armature too. The armature is just a flat disk about 5 inches in diameter by about an 1/8 inch thick, made of plastic and copper wires all embedded together. The bearing system to hold the disk is really crude, as if it is supposed to be self centering maybe? There is a gear on the disk that engages a gear train.

Any advice out there about how to control my new toy? I would like to do it on the cheap until I get my bike built, but any advice is appreciated. If I can make it, that's good. If I should buy it, what do I need?

Thank you in advance!

just about any cheap scooter controller for brushed motors will work. Ecrazyman on ebay is a good seller, though you will have to figure out some wiring. but if you want to spend a bit more, Wildernes Energy, or Chrystalite bike controllers will come with wires the right length and matching throttle can be had, though you will still have to put some kind of matching connector on the motor wires. Sources for that stuff can be found on the web by searching buy, insert name, and browsing. Ebikesca is a good service place for the crystalite parts.

Ask your buddy if he can get more of those motors ?? LaTeR

Henrypaz, Did this project get off the ground? What controller/voltage did you end up with? Information on this hub motor is amazingly scarce but it seems to be 250 watt, can accept higher voltages and may be from area 51 or other military project. Hee hee. Please update us on how things have developed. Thanks!

Because no one else has written it, I will: given the 24 volt rating and small power wires, this is a very big motor with a very small power output. It might be built like a tank, but is probably best suited for something like a powered garden cart or well-built kid's EV. If you want to build something, I suggest you start with a reputable hubmotor or geared motor, with available parts and schematics (not that the latter is likely to be a problem for a brushed motor).