X-treme X-600 and the Battery Problem

I just got my "scratch and dent" x-600 yesterday and I want to troubleshoot a battery issue (already! wahoo!).

I'm a novice when it comes to putting a meter on what wire to figure out if current is where it needs to be.

Here is the battery compartment consisting of Three 12 volt, 12 amp SLA batteries. It's touted as a 36 volt system. 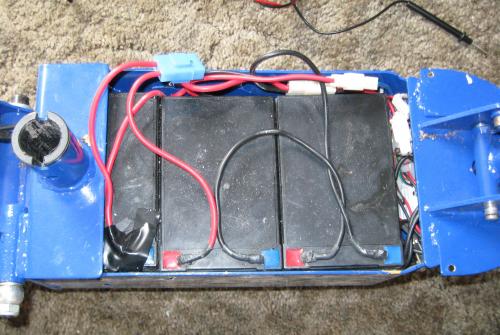 The stock indicators near the accelerator indicate things are peachy... but the motor starts to lose power fast and then nearly bottoms out if I power it (by lifting the back end and running the wheel in the air). 36v light is solid red, the battery indicator shows "Full" with solid green.

I took the scooter out this morning after letting it charge all night and it ran ok for about 3-4 blocks and then it started trailing off quick. So there's something going on. I'm waiting for tech support from x-treme, but I figured I'd run it by you guys and see what I could trouble shoot on my own. With my novice skills :P

Feel free to leave me links to other discussions similar or maybe web links.

I appreciate the input.

What you describe sounds like you have one or two bad batteries. Check the voltage with the throttle on at a low setting so there is a load on the battery pack. Checking batteries without a load will give false readings of it's true voltage. I would place a large screwdriver through the rear spokes the roll the scooter forward till it stops. The apply the smallest amount of throttle while checking the voltage of each battery. A good battery should hold a voltage of around 13-volts, 13.3 is optimum. If you have a bad battery you will see its' voltage drop over a very short time.

Do this test after a short ride to help drain the pack and the bad battery will show up faster.

Do this test after a short ride to help drain the pack and the bad battery will show up faster.

Thank you for the excellent feedback GCS.

I propped the backend up and put a wrench through the spokes to keep it from turning while I performed the tests, here are the results (each reading is with minimal throttle and I did the test twice on each battery): 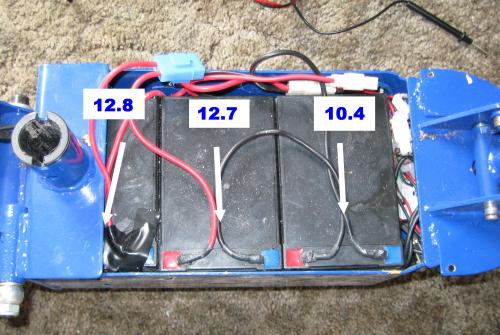 The best you can expect from a "baterry" factory at least :) 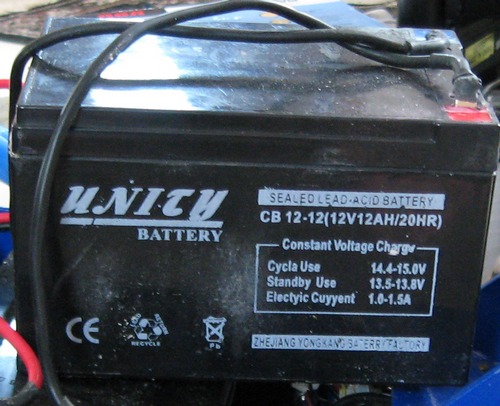 Ok I disconnected the connection that goes straight to the engine and it tested at around 37 volts while applying throttle. Of course there was no engine resistance. 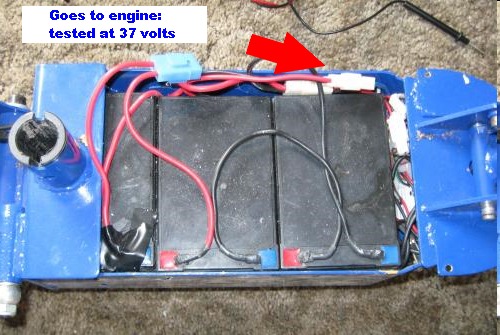 So I was bored and since I won't hear back from x-treme tech support till after Monday, I decided to try charging the batteries up all day long.

I plugged them in for just under 12 hours today and the charger still showed double red (I don't know which one, but one of those lights is supposed to turn green when the batteries are fully charged). 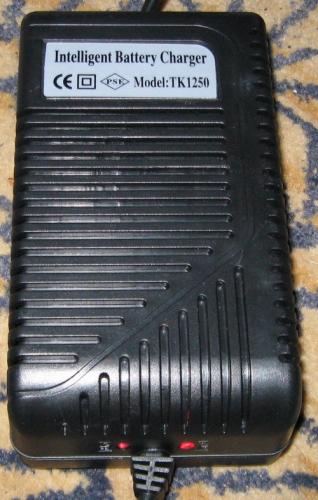 I'll also add that every time I charge the batteries, I can hear a "fizz and bubbling" noise if I put my ear close to the batteries (all 3 of them). It is almost the sound of something that's being slowly cooked.

After the 12 hours (again, the 2 lights on charger were still red), I removed the charging unit and tested the batteries. For each test I had a wrench stuck in the spokes of the tire and I applied the smallest amount of throttle possible to get load readings. I got 13.3, 13.7, and 13.8 (that was the battery I thought was bad earlier). 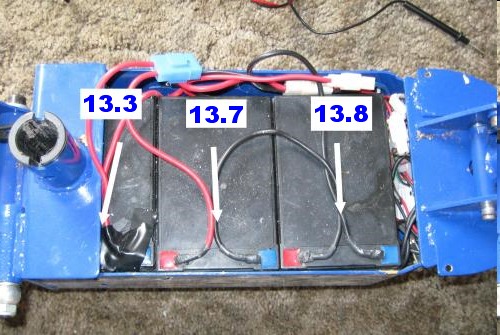 So at this point, I don't know if this is a charger problem, a wiring issue, or that it's just expected you have to plug in your batteries for at least 12 hours to get them charged up (but the light on charger STILL isn't green!!! arghhh!).

I think I'll leave it on the charger for another hour or 2 and then take it out for a test drive on a premeasured circular route and see what kind of range I can get.

The battery reading 13.8 after charge and 10.4 after a short ride is the bad battery. The problem is not that it will not take a charge, the problem is it will not hold a charge. This will cause the other 2 batteries to work harder and will eventually damage them. I would at the very least replace the one bad battery. If I had the dollars I would replace the entire pack as it is not good to mix old and new SLAs. I would get rid of the bad battery in any case. Keep the 2 good ones to be used if you have another battery go bad in the future. Then at least you are mixing old with old and getting a few more charge cycles from the pack.

One other thing I would do is switch to bank charging using one 12-volt charger for each battery. This will increase not only the life of the pack but increase performance over the life of the battery pack.

What if I had the batteries wired parallel rather than series? Would that be better for their longevity?

If I did go with a 12 volt charger for each battery... how cheap a charger could I get? :)

Here is the difference between parallel and series battery connections.

As you can see the voltage adds in series and the AHs add in parallel.

The charger is the life of your battery, don't go too cheap on the chargers or you will be replacing the batteries much sooner. Pay now and get a good charger or pay later and buy new batteries and new chargers. I would just by one good one if that is all I could afford and use it until I could buy another then another. Using one charger will take longer to charge the pack but it will save your batteries. You could use the 36-volt charger to get the batteries to about 90% charge and the single charger to balance the batteries so they all have the same charge. A balanced pack will not only last longer but it will give better performance and your bike or scooter will perform better for a longer time and distance.

Ok. It's pretty obvious that I'm a novice when it comes to the mechanics of electricity, batteries, etc...

I just sent back all 3 batteries and X-treme will be sending the replacements (hopefully before July ends; *sarcasm*). Since they have these batteries soldered together in a series... How would I go about charging each individual battery? Will I have to rig up my own setup so that instead of soldered battery wire connections, I'll have something that can be plugged/unplugged directly from the copper terminals?

I'm just wondering how to clip on a 12 volt charger and focus it on a single battery any other way without getting energy transference to the other batteries which are soldered into the series.

Also... what if I was only able to balance the batteries once every 3-5 charges? Would that be helpful or is it just an all or nothing kind of benefit?

Thanks again for your input, it is much appreciated.

Lets take thing one step at a time.

1. Bank charging will work to keep the batteries balanced if you only do it every 3 to 5 times you charge however, it is best to do it all the time to get the full benefit.

2. There is no need to connect and disconnect the batteries to or from the scooter or each other to bank charge given the following:

a. The chargers must be isolated.

- To check if a charger is isolated use a meter set to ohms setting. With no power applied check between the wall plug prongs and the output connector pins. There should be no connection in any combination of wires from one plug/connector to the other.

b. Use a smart charger for a 12-volt SLA battery.
c. Simply add a connector to each battery plus and minus so you can just plug and unplug the chargers.

What if I had three 12volt trickle chargers connected to the battery terminals with alligator clips? Would this be feasible? 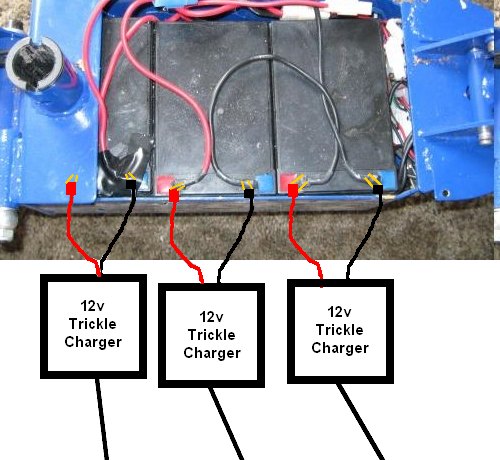 Three 12volt trickle chargers connected to the battery terminals with alligator clips will work fine as lone as the trickle chargers can supply enough charge in the amount of time you have to charge the batteries. If they don't then your batteries will just loose charge over time by not being fully charged. The batteries in the picture look like 12-volt 12 AH batteries. If this is the case, and you discharge them to 70% of their capacity, you would need a trickle charger to have an output of 1.1 amps to fully charge the batteries in 8 hours. Here is a Battery Tender which would do the trick. Most trickle chargers will only output about .6 amps so you would need to use something like the Battery Tender which is a smart charger with 3 stag charging and will not over-charge your batteries even if left connect for long periods of time. These are the chargers I use and I have never had a battery go bad when left on these chargers, @ $47.00 each they are really a deal too.