I received my XB500 scooter today...and unfortunately after I have purchased the bike, I've read tons of horror stories...I can only hope that after taking 5 hours to assemble, this thing actually works and doesn't kill me in the process.

The only thing I can't seem to get accomplished is charging the battery. (God only knows if it will hold a charge or messed up some other way)

Here's what's happening....if I try to charge the batteries by plugging the charger into the outlet that is just below the seat, the green LED light on the charger turns on immediately, everything on the bike works immediately, but the battery is not charging this way. I unplug the bike and it's dead as a doornail.

I plug the charger directly into the battery, and it won't hold a charge and it's completely dead.

There are two fuses that came with the bike, one is a glass fuse and the other one is a green two prong fuse. Where these fuses go, I don't have a clue, nor does it mention in the owners manual that you need to install them in order for the bike to operate.

Are these fuses necessary for the bike to hold a charge? If so, where are they on the bike?

You came to the right place! I'll get started on the illustrative step-by-step instructions. First things first: do you have a voltage meter?

No, I'm sorry I don't. ;-( I was hoping that this bike would have operated like it should have right out of the box. ....

So the two lights on the charger when you first plugged it in were both red, and the one turned green after several hours?

Just sent you a message. :)

Ok. If you plugged directly into the battery pack and the charge light of the two light indicators showed red and the fan started...then the pack is probably not charged. And, it may be that there is a "low voltage" cutout on the 500 that will not allow the scooter to work when the pack voltage is very low. I would try charging the pack directly plugged into it. This may take several hours if the pack is that low. The fact that some things worked when the charger was plugged in...which as I always say is probably not an "ideal" test since it could damage something when you turn power on to the scooter with the charger plugged in below the seat..or even to the pack. Not sure...but don't do this alot anyway. Just charge the pack direct until that green light comes on. Then plug the pack back in and see what you get. That is the first order of troubleshooting in my estimation with what you've described. You can check the voltage of the pack with a voltage meter if you know how to do that. It's simple but I think you replied you didn't have a voltage meter. Regardless, just go ahead and try charging the pack directly.

BTW, I have the XB600...and there are "some" differences. However, I have helped someone in my local area with a 500...so I know basically what those differences are...and I learned some more about what they are trying to help Aztexfembone on this forum.

Regarding fuses. No, those fuses that came with the scooter are extra replacements in case a fuse blows. These scooters come from the factory to x-treme ready to go. I know you have to do some assembly i.e. front tire, brake, trunk, etc...but all the electrics, etc. are ready to go. I am sure X-treme doesn't open the cartons at all...and therefore whether they are charged sufficiently probably depends upon how long it has been since they left their factory home in China! So it very likely could be simply a discharged battery pack...just a simple thing.

If you plugged directly into the battery pack and the charge light of the two light indicators showed red and the fan started...then the pack is probably not charged. And, it may be that there is a "low voltage" cutout on the 500 that will not allow the scooter to work when the pack voltage is very low. I would try charging the pack directly plugged into it. This may take several hours if the pack is that low. Just charge the pack direct until that green light comes on.

Luvmy82 Says: I charged directly into the battery pack overnight. When I checked the light on the charger, it changed to green, but the battery is still dead.

You can check the voltage of the pack with a voltage meter if you know how to do that. It's simple but I think you replied you didn't have a voltage meter. Regardless, just go ahead and try charging the pack directly.

Luvmy82 Says: I guess I'll have to go to Radio Shack and pick one up?

Then plug the pack back in and see what you get.

Luvmy82 Says: Huh? What do you mean by this? Am I missing an electrical cord that goes from the battery pack back into the bike? I'm not sure what you are trying to say? Could you please clarify this point?

Yeah. Keep charging the battery pack directly (outside the bike).Meanwhile look for continuity starting at the black thick three prone that hooks battery pack .Only two are hooked up , the black wire is soldered to a bunch of blacks (ground)-The red goes to the green 30 amp fuse - more likely it is blown out .In all that is within one foot lengthwise .Before the controller's .

My first guess is that fuse as well. We'll work that route and then if it's not the fuse, we can see if it's the controller.

It is all before the controller .The green light from the charger means that it is not charging the batt (in this case) since when charged directly (outside bike) it turns red .The controller seems fine when applying proper current .

Does the 500 have a plug down near the battery storage area where the black cable going to the controller, etc. actually "plugs" in to the pack? I know the pack isn't in a removable box like the xb600 but this person seemed to indicate he could plug in at the charging port or directly at the battery pack. If that is the case, then what I'm trying to state is that if you plug in directly at the pack (if that's possible on the 500) then you're unplugging the other black cable to do this...and you'll have to plug it back in obviously once you finish using this "port" to charge the battery pack.

And, how do you know the battery pack (there are four batteries in a series) is dead as you stated without checking the voltage with a meter? Simply because the scooter won't do anything...doesn't necessarily mean the batteries are discharged or even low.
If you do get a meter...which is a good investment (cheap) if you are going to have an electric scooter...you can check the total pack voltage at the plug underneath the seat where you normally plug in the charger. It should be like 53-54 volts on a full charge. Do that and let us know what the voltage is. That will tell alot.

Gushar: read my PM to you...you will crack up! :jawdrop:

She meant me. Bike is up and running. :D

What was the problem? We'd like to know so the rest of us can better help anyone in the future.

I'm too embarassed to post....so I forwarded the PM to you again. Hope you got it?

I still haven't seen a PM for me??? But don't be embarassed about this! Look, we're all learning. Certainly there are real experts on here and just folks of all levels of knowledge regarding electric vehicles. I am just a participant here...not admin or anything like that...just as you are. But I know one of the most, if not the most, valuable aspect of this forum is to gain "knowledge." And that happens when others share experiences, etc. Nobody here should be embarassed because they don't have a specific level of knowledge on the subject. It's important to communicate what the solution was to a particular "problem" so others might benefit from your experience. Anyone who would be critical of you or anyone here because of their knowledge level regarding EVs or a specific EV problem...etc., etc. shouldn't be here...in my opinion. And I can't speak for everyone else here but I bet you most everyone here shares that opinion! If I didn't think so I wouldn't participate here. Most of all I think we are all really glad!!!! that you fixed the problem and now you can begin to experience the pleasure and economy of your new scooter/ebike!

Aztecfembone...do you want to tell us what the problem was??? Again, if folks come here for help and then for whatever reason don't want to share their experience of the fix...that's defeating one of the primary purposes of this forum. We need to know what the fix was in order to help other folks in the future.

You're right: battery plug—ya gotta plug this in. If you don't know there's even a plug there (which I didn't either, but mine was plugged in and I needed to unplug it to replace the controller and fuse), it does make things difficult. 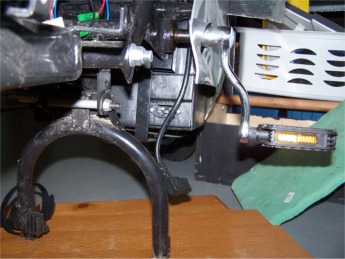 Ah ha! So the plug to the battery pack WAS unplugged. Well now all of us have left a very important plug...unplugged...before haven't we! :-)