How about a Hybrid Scooter?

I was thinking about this the other day, while I was contemplating the idea of getting stranded on my e-scooter and having to push the that all the way home.

It would be nice to have the gas as a backup in case of something going wrong with the batteries or something along those lines.

A little 4 stroke motor like this one http://www.duropower.com/item.asp?PID=87&FID=3&level=1 hould work. And it would only add another 8 lbs to the weight of the scooter. 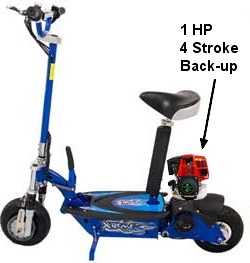 So what would be needed is:

1. A clever way to mount it and integrate it along with the electric engine.
2. Rig a control mechanism near the electric throttle.

1. You wouldn't want the electric and gas engines on the same chain drive/belt drive due to the physical resistance they would place on the drive while one is being powered and the other is dormant. (my electric engine puts considerable resistance on the drive whenever I have to push the thing around on my own power)

2. Adding 10 lbs... what will that do to the overall range of the electric setup?

[size=20]Has anyone attempted something like this for an e-scooter?[/size]
I'd be interested to see what the results were.

Scooters are a bit small and I've never heard of someone using a portable generator like you suggest.

However .. The Zero Carbon Car is a book about what it would take to build a car with zero carbon footprint. The author built his own hybrid electric car to act as a testbed. It's a normal electric car w/ an on-board 10kw marine diesel generator which he fuels with biodiesel. A little different in scale than what you're discussing but demonstrating that you're on the right line of thinking.

Another example: Porsche Had World's First Hybrid 100 Years Ago Dr. Ferdinand Porsche's first car was a hybrid electric nearly 100 yrs ago. Just goes to show that there's nothing new about those new hybrids.

Four stroke is a good idea because they're much better about poisonous side effects (less "pollution") than two strokes.

I've been thinking about this too. You could make a pusher, and possibly charge the batteries simultaneously as mentioned above or

1) Get a quiet as possible electric generator, some I came across on my Google adventures run on multiple fuels like Natural Gas, Liquid Propane Gas, or Gasoline (I've been running my gasoline lawn mower on propane for a couple of years now without incident).

2a) Build a battery charger circuit. That runs off the 120V output of the generator. Preferably a bank charger if you have the batteries in series.

This may belong in the large scooter category, but Piaggio, makers of Vespa are going to offer hybrid scooters in the near future.

BatteriesThe company has developed two versions, based on their Vespa LX 50 (shown above, with 50cc gas & 1000W electric motor) and the more sleek and powerful Piaggio X8 125 (125cc gas & 2500W electic motor). The combination of electric and gas engines provides approximately 25% more power, helping to alleviate fuel consumption when starting or accelerating. It also reduces gasoline consumption by 20%. The scooter can also operate in locations where combustion engine fumes would be undesirable (inside buildings or covered areas) by switching into a low-speed "electric only" mode.

Sleek The vehicle can charge its batteries from the gasoline motor while traveling at normal road speeds. It can also be connected to a standard 220V (European) household plug to recharge the electric cells in about three hours. Plugging in your scooter reduces operating costs by about half, versus the gasoline only version. Two 12V 26Ah batteries are located under the LX 50 HyS seat, where riders usually store a helmet (the added rear luggage pod is intended to replace the lost storage space). The X8 includes three 12V 26Ah batteries while still offering sufficient under-seat space for a single helmet.

[Update: Geoff emailed a link to 2strokeBuzz, which has lots of nice photos of the LX 50 HyS and the Piaggio X8 HyS. Looks like a great scooter site, too.]

Here is an option I ran across. It says you can charge the batteries while running the gas motor.
Link: http://www.staton-inc.com/Details.asp?ProductID=3320

Good find, now if they only made a 60V version.

One day I threw my 65 lb honda generator and a 4 amp 36v charger in my trikes basket just to see what would happen. Results, range increased by 30% but could be infinite with a bigger charger. Speed was cut from 22-23 to 14-15 mph. I was using about a tenth of the capacity of a 800 watt generator, so a bigger charger and a smaller generator would actually work. I still concluded that I'd rather carry 65lbs of lifepo4 than a noisy stinking, polluting generator. By the time I ran down 80 ah of lifepo4 my butt would demand I get off for at least 8 hours. I rode a bike yesterday with one of those kit moped gas engines on it. Worked ok, but the vibration was murder, and it was slower than my BD36. No expensive lifpo4 there so there are tradeoffs. Guy said he was more likely to have the gas get stale than run out. The way that thing vibrated I could see what he meant.

I fired up Google Sketchup and did some preliminary designs. 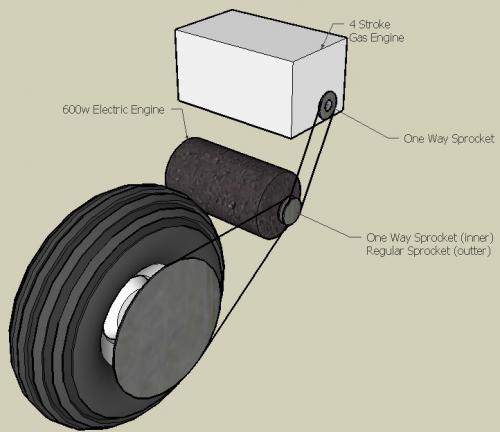 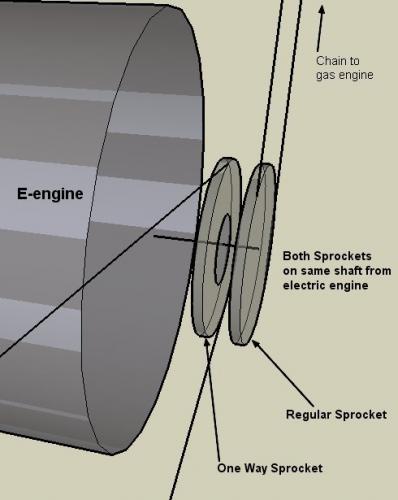 What might work is if I had 2 large sprockets on the drive wheel and had 2 separate chains with one way sprockets placed strategically.

I saw one on Ebay just a day or two ago!

I'm thinking I should just start with something small to see if my idea of having a sprocket clutch would work.

If I could just remove the resistance that the motor currently puts on the drive chain when dormant, that would be a real battery saver (allow for longer coasting, etc). Plus I could push it around a little easier if I did have a battery go dead on me.

Anyone have suggestions as to what I could use? I thought about just one of those sprocket clutches off a go-kart. It would take a bit of doing to fit it into the system.

Anyone know where I could get a specialty Free Wheel hub/sprocket (it's the same technology that is built into 10-21 speed bicycles).

So I have 2 sprockets. A tiny 1 inch diameter one off of the motor shaft and then the larger one (about 5.75 inches diameter) that is connected to the wheel hub. The chain I have has 1/4" links

I don't think I could find a free wheel sprocket as small as 1 inch in diameter, so I'll probably have to get around 5.75 inches.

Thanks for the input :)

If you are interested I just completed my Hybrid Scooter project. I am currently testing and optimizing it. I can answer some of the questions that few of the posters have raised.