... If this post is not in the correct sub-forum, please feel free to move it to where it belongs. Thanks!

Anyways, does anyone here have experience, knowledge, or thoughts about the Diggler Electric Scooter? Apparently, the $1200 Alpha Dawg electric conversion has 36V and has 20 MPH top speed and 20 mile range. The $2000 Electric (batteries under the floorboard) version is 48V and goes a little better at 25 MPH top speed and perhaps 25 mile range.

Thanks for your comments!

Seems a bit pricey though.

I think you could build your own for quite a bit less.

I bought a $50 used Quazar scooter,
a new controller, and have overvolted it to about 48 volts,
and it goes probably 20mph.

I took out the seat, and I stand on it almost the same as the Diggler.

It also has shocks, and rear suspension.

So I think for a couple hundred dollars, you could come close to the same thing.

Maybe just stick a hub motor on a non-motorized scooter similar to the Diggler.
I've seen a few of those going for $20 on Craigslist.

On the other hand, the Digglers appear to be high-end stuff...
built to take quite a bit of punishment. Hhhmmm.

I was hoping to use something for my commute while the weather is nice and warm.
Almost 10 miles each way with some hills (almost 20 miles round trip). Sidewalks and bike lanes all along the way, which means I don't need to worry about keeping up with automobile traffic (speed limit is posted at 35 MPH, but traffic flows between 25-45 MPH depending on location).
There are a couple spots I found in the parking garage with electrical outlets to plug in the charger.

Some quick research yielded a not-so-good review of the Quazar. Let me know if there are others I should check out.

Son disappointed, July 13, 2007
By Mildred Barrett "Movie watcher" (HOUSTON, TX United States) -
The scooter was advertised to go hours without a rechare. It only last about 15 minutes. Also, the air goes out of the tires. Very dissatisfied! 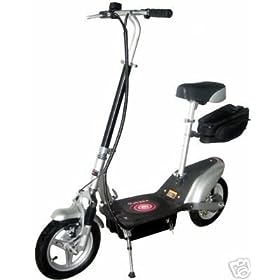 Yeah, I wouldnt recommend the Quazar for a daily 10 mile commute.
You'll never make it there.

I only paid $50 bucks for it, and it's only for scooting around my block for about 30 minutes.

For a 10 mile commute, I think you should just get a electric conversion kit,
like the WE BD/BL 36.

So for about $500 you have a viable commuter.

That's what I did.

If you are set on a scooter, they are heavier than bikes,
and will prob have less range and speed for the same batteries.

Good luck in whatever you get.

But if you only want electric, I think you can find
some better scooter options for that kind of money.

Hhhmmm, what are the scooter options that you'd recommend? I prefer something that pretty much turn-key. Thanks!

Here's a dual-motor alternative that I discovered :)

It's from http://www.currentcyclebikes.com/ (Scroll towards bottom of the webpage)

There are others in the scooter forums who can give you better recommendations
on what kind of scooters they like.

One advantage of a bike, is that if you have batt problems,
you can always pedal.
There is also the "stealth" element of an ebike, in that most
people will never know that you are electric, as long as you pedal.

With a scooter, you might be limited to where you can ride it.

Oh, I saw scooters similar to the ones you have posted pics of,
at Costco the other day.
Non electic of course.
They were about $60.00.

It would be fairly easy to convert them to electric,
for a few hundred dollars.
Maybe $500 total, and you'd have an electric scooter.

Sorry, I've not been reading the forum for a while.

It was at my local Coscto, not online.
They only had a couple, and they were gone the next week.

Unfortunately not all Costcos have the same stuff, even in the same city or state.

If you don't want to fiddle around yourself, this would be the place to buy. I bought a diggler a few years ago, it is solid and works as promised in every respect. I recently electrified it, and it is way more awesome than I expected it to be. I compared the cost, and yes, the fellow makes a profit on the scooter, and profit on the motor, but he earns it because it's well designed. Also, the DIY kits don't save you tons of money, maybe $50, maybe $100. On the brakes, the disc brakes are worth it... you'll run down brake pads quickly with caliper brakes.

You might look at the electric Gopeds if you haven't already done so.

Nice quality products and they don't lie (too much) about the specs. American company with real user support behind them. That said, 10 miles on a Goped is a long and bumpy ride. Plus if your batteries go flat, you are kicking or pushing the beast.

I second what others have said, an e-bike is a much more practical solution for a 10-mile commute.