Duct tape battery (not Ping) totally out of balance

I just got a duct tape 36v 10ah battery from "mp3hk" on ebay - I knew it's not Ping but I only need to ride short distances so I thought I'd give it a gamble. However the battery is extremely unbalanced and not sure if this is normal for a new pack.

The battery arrived in one piece and performed well on a test ride, but the charger blew up only the second time I plugged it in.
I bought a SLA charger until I can get a new lithium charger. After charging a half time with the now blown up lithium charger, and a full charge with the SLA, I ran out of power after riding only 6km.

I took the pack apart and found several loose welds, which I carefully fixed using stainless steel flux and solder.

However, my range is still only 6km.

I measured the voltage of each cell group within the battery, and got a pretty big variation.
After a full charge, the highest cell in the group was 3.90v (which is probably the BMS cutoff), and the lowest cell was 3.1V! This explains my poor range. Once this lowest group discharges to 2.0v, the BMS cuts off all power.

I'm still waiting for my Lifepo4 charger to arrive and am still charging with the SLA charger.

I know the non-Ping sellers of duct tape batteries are a gamble, but it's not normal for a new pack to be this far out of balance, is it??

Will it be possible to bring the pack back into balance when my Lifepo4 charger arrives? The SLA pack is only charging at 43.2v. The new Lifepo4 charger should charge at 45v.

I also just received one of these from Mr. Lau Chan (MP3HK), but mine is a 24v 10ah. I read only moments after I bid about the infamous quality control issues with Mr. Lau Chan's batteries. Mine looked like it had surgery as it was cut open when I received it Friday. I am still cautiously testing it, and am not sure how unbalanced it is as of yet, but I can say that the charger is inconsistent. At first it was putting out a 28.1v charge and now it is only maxing out at 27.4. I also have found loose/unattached wires in the pack.
Fortunately I did not spend too much on this. As I said I read shortly after I bid about how bad this seller is and I just happened to win the 24v 10ah duct tape battery for $127.71. This of course included the free 4 month shipping. I won the auction in September. I would have paid for air shipping, but he started changing the price, and then lowered it after I declined further convincing me that I had made a mistake, so I just decided to let it take the slow boat from China and cut my potential losses. I had already concluded that if it arrived in any working order at all that I was doing well from what I've read.
I don't know how the positive reviews get on there, although there are plenty of negative ones too. I can only assume that they give feedback before they test the batteries.

Good reviews? Most users are probably not as informed as the people who visit this online forum. Also, it depends on whether you get a good pack or a bad pack. They are all hand built and so there can be variations in quality.

I got a 24v 10ah from another ebay seller (potentially the same guy) and that pack seemed to work OK. I could go over 20km on it but my top speed was too low (only 19km/h without assistance). I decided to upgrade to 36v.

I'm surprised that they would send one to you with obvious 'surgery' - with all the glue guns and duct tape they must have lying around, it shouldn't have taken too long to wrap it up like new again...

If I can get the balancing issue resolved, I'll be happy if the battery lasts long enough for me to save up enough to buy a Ping pack...but if my range will never be more than 6km, I'm going to be a little frustrated.

Well I did buy this battery mostly as a test/experiment until my Headway's arrive. I emailed the seller a picture to see if they can explain the reason for the condition, but received an out of office reply as he was on vacation for the next 9 days . . .no doubt spending his e-bay scammings. I suspect, but cannot confirm that perhaps customs may be repsponsible for the "surgery", however there were no stamps or paperwork indicating US customs had checked it.

I couldn't really blame customs for checking these out though, if they did, as the batteries do look suspicious and could be several illegal things. 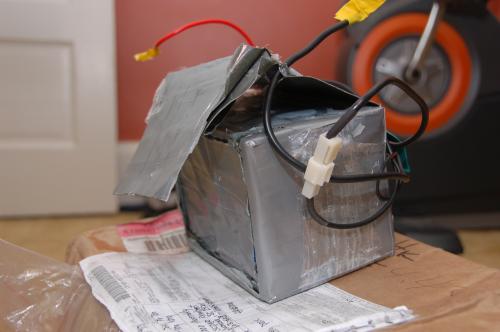 Wow, you'd think by now this Lau character would be kicked off ebay. But NOOOOOOOO. I've lost track of what name he sells under. Cammy cc seems to be the most reliable seller of bargain round cell packs, but the real Mcoy is the prismatic cell packs from pingbattery.com. Lau has a definite pattern of sending out most likely returned once already packs when you win an auction too cheap. Even if he does eventually get forced to repay you some, he got to borrow yer money for no interest.

Charging longer on the bad pack could help, but most likely there are completely dead cells in there. If it wakes up and is ok, it will be the first mr lau pack I heard of this happening with.

An update:
I bought a 36V Lifepo charger but before hooking it up I checked voltages on all cells and they were balanced. I guess it just took a few charge cycles and leaving on the charger overnight for it to become balanced. I test rode it and got at least 20km range, so all is well.

I'm glad I decided to open up the pack though because there was more than one loose cell that needed soldering.

There are some small, regulated, 3.7 volt (approximately a 2 amp maximum) power supply (or "charger") units available for $10 each (in Quantity 10 or more), that might be just right for bringing up low cells. Or, a person might even use one as a "complete" individual-cell charger.

I just received 10 of these chargers, but have yet to use any of them. Apparently others speak highly of them in this application.

CAUTION: When in use, allow sufficient space between them to avoid charger death-by-overheating! Apparently the part right near the AC power prongs generates the most heat. Yes, it is VERY tempting to use every AC socket on a closely-spaced AC plug strip, but I was warned by one user who "tried and fried". So, use only with "sufficient" ventilation.

One might even use one on each cell of a pack to charge (somewhat slowly) the whole LiFePO4 battery pack. Since each cell is charged seperately instead of the cells being charged in series, overcharging of the higher cells should not be an issue. And, the low cells can each receive the extra charging that they need, eliminating the need for the BMS that is so critical for series-charging.

What, no BMS? But we are all told that we need a "BMS", right? For series-charging, where the same amount of current is forced through each cell, yes a BMS is "required" for maximum battery life. But, with individual-cell charging, where each cell gets only what it needs, a WELL-regulated, current-limited charger itself limits the charging.

Finally, there are some 10-amp DC-to-DC power supplies (originally around $80 to $100 each) being sold for around $10 each ... 50 Ah in 5 hours ... might be a possibility worth investigation. Most appear to be only 3.3 volts out. One such type apparently cannot tolerate being connected to a higher-voltage, so is not suitable. Another needs to output at least 2 amps to maintain its output voltage regulation, again not really suitable. But, I just got one that might possibly work. I just need to find time to test it properly ... maybe after I get my taxes done!

Any other duct-tape battery owners care to check in? It would be nice to have a running review thread on these things. The prices are sliding down just a bit from their high last summer. I am tempted.

Any other duct-tape battery owners care to check in? It would be nice to have a running review thread on these things. The prices are sliding down just a bit from their high last summer. I am tempted.

Well I have 2 duct tapes from mp3hk...
The first one I got for $229 and was a 24v 20ah one. I used it for 2 months straight with no problems (I moved it over to my son's bicycle when I got the second one.) I was able to get 18 miles out of it per charge. (My bicycle weighs 90lbs WITHOUT the battery) so it worked out well for me (I didn't have a meter to check it's voltage).

I put the first one on my son's bicycle (same type as mine) but now it only gets about 9 miles per charge... Either one of the cells has gone bad or there's some loose connections... (On my Meter it only shows 26v with no load on it and fully "charged") I will be opening it up this weekend and see what's up and I'll keep ya updated.

The chargers that came with them kinda suck(ed). They get REALLY HOT while charging.(I've had TWO of them "blow up" and have gotten replacements(of the same type) relatively quickly... I've since purchased some new (better) ones and will see how well they work.