This race was organized by Speed Ventures, an organization that does professional race car instruction. They had an idea to sponsor race track time for "alternative fuel vehicles" which turned into electric vehicles.

As a result, electric vehicles were running on the track at Laguna Seca all day today. It was a sweet sight to see.

Motorcycles: A special bike made by one of the mission motors employees, the Shocker from patmont motor works, the super bike built by Electric Motorsport for TTXGP (but which didn't run there), plus ?3? of Electric Motorsport GPR-S bikes, and a souped up pocket bike ridden by Steve Muskarelli

That's from memory, I may have missed some.

One time when the cars were lining up to run, the Tesla owners were calling out to each other about how supremely perfect it felt to be doing this. I got that on video.

The Teslas were doing great going around the track.. but they were hampered by a design decision. At full bore like track conditions, the Tesla's were making two laps and then going into a lower power mode because of overheating. Tesla's are designed for street use, not track use. They don't have the cooling system needed for track use. That's a bit of a shame as they have the race car body and the drive train to do racing.

Not all the vehicles got onto the track, and some of the ones which did had problems. One car the guy had it configured for drag racing mode and his motor tore itself up and did a plasma ball, for example. One of the go-karts had a similar motor malfunction but not as dramatic.

The Shocker bike looks even weirder in person than in the videos. It's designed by the people who design the goped. They're interested in breaking into a new market. The Shocker is a dirt bike style, but the suspension is more than strange. On both front and rear it's a single side connection between frame & wheel (single side fork, single side swing arm). The battery pack has some kind of cooling system with a radiator.

I gave Tim Patmount, Principal of Go-Ped a heads up that the Shocker was a head turner at the Laguna Seca event. We've been a dealer for Go-Ped for the last five years, here's Tim's response back to me:

"Cool! We are still R&Ding and this was our first track experiences with it. I wish they mentioned that we were the second fastest bike (only 2 seconds behind) and our bike ran all day! Here's more info for you to check out: http://www.patmontmotorwerks.com/blog/

There are some great pics as well as You Tube Videos at the link he provides.

Yeah, that's true. The Shocker came in 3rd to EMS's bike. It looked really good on the track.

Both of them though came in behind this tiny go-kart that probably didn't belong in their class ... The organizers had two classes: cars and two-wheelers. They probably didn't expect go-karts to show up, but some did. Some of the go-karts were big enough to run with the cars, but this one go-kart was put with the motorcycles for some reason.

Just posted an article about this on examiner.com

This includes a buncha pictures and video

Here's a couple pictures I didn't deem suitable for the masses:- 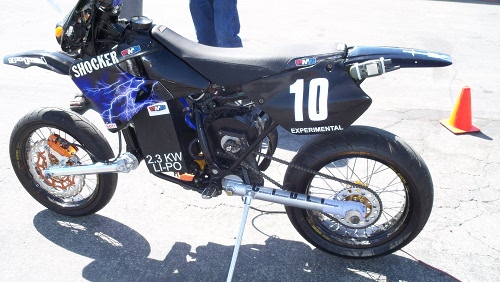 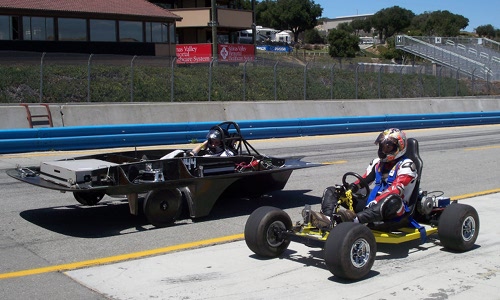 A go-kart and Stanford University's solar car. For some reason they ran the solar car naked (no solar cells) and claimed it was being run on the reserve battery pack. These solar cars can really move!! 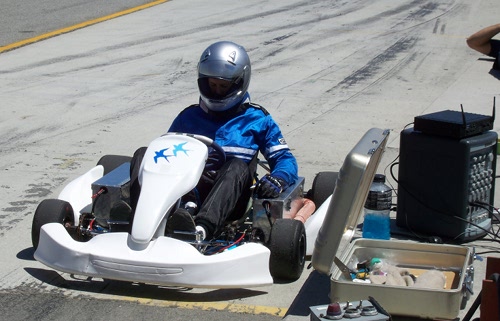 Another go-kart.. this is the one which won the two-wheeler category. You'll notice it has more than four wheels. One wonders why it was categorized with the two wheelers. 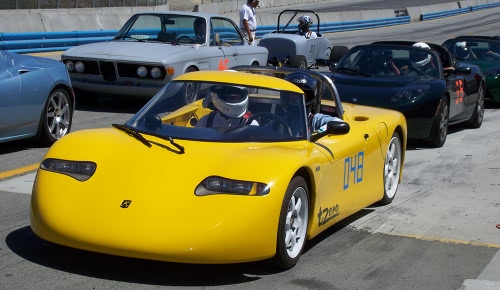 This is one of only three tZero's ever built. I was told by Will Beckett (the driver) the drive train, built by AC Propulsion, is exactly the same as the Tesla Motors and Fisker Karma etc drive train. AC Propulsion's business is to supply drive trains. AC Propulsion was started by one of the EV-1 designers. 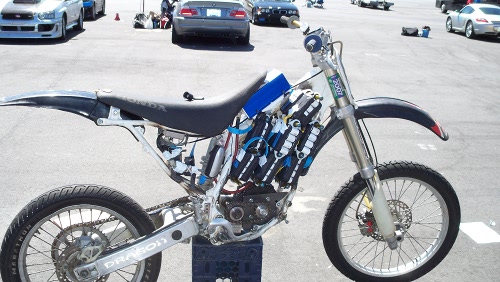 A random motorcycle which was in the pit area and never went on the track. The cells may be A123 (or maybe not) 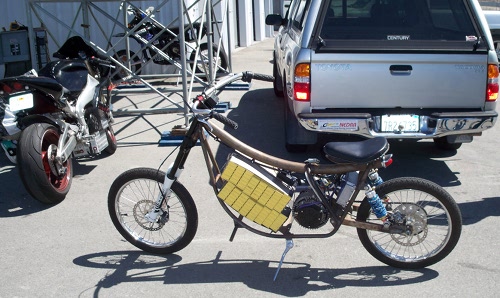 Another random motorcycle in the pit area, this one was made by a Thunderstruck EV person