Was running WE BL-36 at 61 volts overvolted.

I think I have the 50Amp controller.

The Current draw on the Watt's UP meter, only showed 23 Amps.

Had been running fine.

I was stopped still, at red light.

Went to accelerate, and the front wheel fell off, I think the bolts had come loose.

It might have been that I didnt' pedal, and only used throttle,
or the wheel might have just come loose on it's own.

I put everyting back together, the wires seemed fine going to the motor.

Now the motor makes funny sounds, and doesnt draw as much currrent.

The Watt's Up meter, shows it only draws about 1 to 2 AMPS now,
before it was anything up to 20Amps, but usually just around 10Amps.

Speed is only about 8mph with the wheel off the ground.
It used to be more than 30mph.

Lots of vibration and noise coming from the motor.

Any ideas on what i broke ?

I need to probably take apart the motor ?

No brushes, but what is there that would need fixing ?

Thanks for any help or ideas.

What happened, may have been the equivalent of throttling, and braking at the same time,
because as I was using the throttle, the wheel came loose, and the brakes jammed it to a stop.

Any ideas what this would break ?

Here's a pic of the wires going into the wheel

There is 1 red power, 1 black ground, 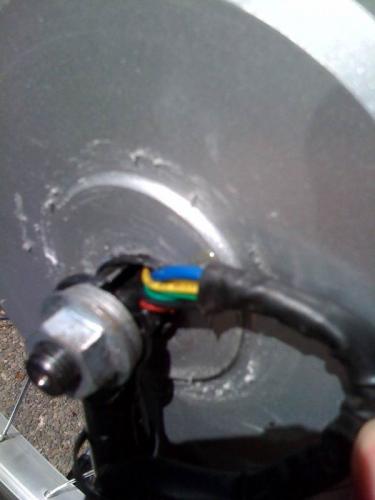 I am going to focus on replacing the controller first,
as there is a weird blinking green light issue when the motor is spinning.

It doesnt correspond to the green light error codes, but it probably indicates the controller is bad.

It's also cheaper to try the controller first, than the motor.

The motor does spin, though making weird vibrations.

Why do I have 2 wires each, for the Blue, Green ,Yellow ?

In looking for Brushless controllers, it seems that most have only 3 wires total ?

Do I need to open up the motor, and find out if all the wires are being used ?

Ok some pics coming of my take apart of the BL-36
Motor seems fine, nice and clean, no funny smells, or burnt looking parts.
All the magnets on the perimeter of the motor seem fine.
All the wires seem fine. 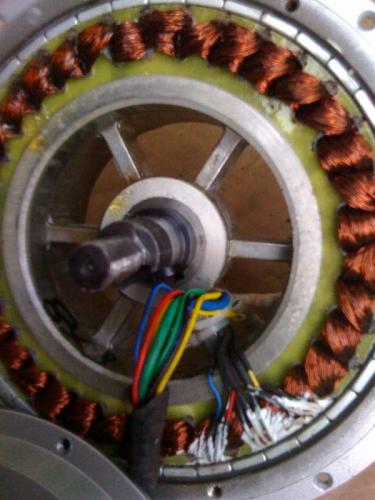 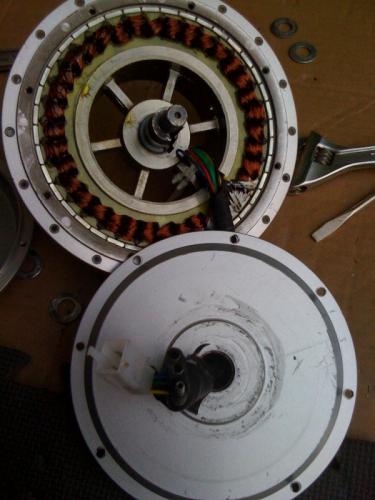 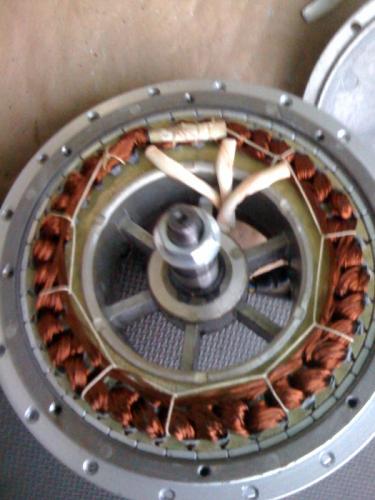 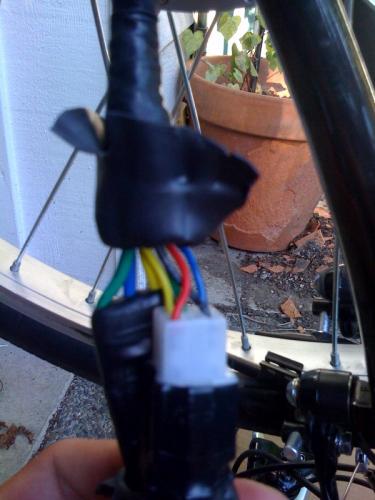 Well, from reading up on other posts,
it seems I have a Hall Sensored Brushless BL-36

The 5 other wires, thin Blue, Green, Yellow,
and thin Black, Red, are for the Hall Sensors.

The 3 thicker wires are for the motor Power.

I've gone ahead and purchased a new 72 Volt 20 Amp Crystalyte controller,
for brushless, with the Hall Sensors.

Do the Hall Sensors on the motor burn out too ?

I hope it's not the motor that is the problem.

Anybody know how to check if the hall sensors are good ?

I didnt smell any weird smells in the motor,
so i dont think anything is fried in there.

Also in the controller it didnt smell weird either,
so not sure what failed there.
The Caps in the controller are 63volts, but I was probably close to that,
as I know I was running at 61volts.
So that is a more likely failiure ?

Also took the opporutunity to silicon seal the motor,
so it should be mostly waterproof now.

Hopefully the motor is still good ....

When the controller for my BL-36 (sensorless) failed, it made no noises, had no smells, and I could never find any indication inside the controller of anything burned or popped. The lights even still blinked on the controller. Replaced it and it has worked fine ever since. They seem to fail quickly when you first start using them if they are bad. I only use mine at 48 volts though. 60v is too high for a stock WE 50amp controller.

Did you just purchase this kit? I have not seen any BL-36's with hall sensors for a while . . .