One of the things we picked up at Interbike 2009 is a brochure from Giant about their "Hybrid" bicycles. I'm going to paraphrase what they say about why their hybrid bicycle is not an electric bicycle and why it's offending me. I wonder what others think?

They say "Giant's hybrid bicycles are not electric" and then go on to explain that electric bicycles are really motorcycles. That in most cases the electric bicycle has a motor in the rear, you jump on, twist the throttle, no pedaling, and you just go. They go on to explain that they're usually highly inefficient, the motor is under powered, the battery is older technology, and because of that the components are overstressed. High cost of upkeep, poor range, portly weights, "electric bicycles should be viewed as a thing of the past".

If they mean the scooterbikes then I'd agree with them. Those aren't bicycles really, the shape is of a scooter and the pedals are usually an ineffectual addon that's there for legal purposes. But there are a ton of electric bicycles that are perfectly fine for pedaling or throttle, are efficient, use modern battery technology, etc. There were several perfectly fine electric bicycles on display at Interbike.

Their "hybrid" bicycle is properly called a Pedelec. It senses your pedaling and only adds power when you pedal, amplifying your pedaling. From their description they have a well designed control system that has some really good features to it. The design sense is good and the bicycle looks nice. Unfortunately I didn't see them at the show and didn't take a test ride.

Their bike isnt electric? Hmmmm...... I guess their assist is steam powered? I guess everyone wants to believe their product is unlike anything else out there, or there wouldnt be an entire time slot of 10pm-8am of infomercials on all the television channels. Denying that it uses electric power is a tad insulting indeed.
As to electric bikes being a thing of the past, I hope they are wrong, but it just sounds like marketing to make their product sound more "advanced". From what i have heard, Giant does build a decent bike, and i hope the hybrid components are worthy of their reputation as a bicycle company.
Scooterbikes?,, hmmmm, yes, that "twist & go" does seem to be highlighted, but again, my Currie Ezip Trails has the same thing, but it does cut into the range, but it gets me there without a sweat-vast improvement over my recumbent bicycles. The "pop-off" pedal systems really annoy the daylights out of me though. They are not safe if not built right, and the ones i got SUCK. As a cyclist, I'd like them to be solid, reliaable and secure, and geometrically correct, not that i'd want to use them to take me a mile or two, but again, my Currie is a dog when the battery dies too, just with gears to make it easier. I also prefer the visibility factor of the plastic bodies & fairings, and storage options, since most electric bikes cant accomodate attaching a BOB bicycle trailer (axle skewerattachment)
Again, "not electric", (shakes head laughing).... and just when you thought you'd seen all the snake oil sold out.......

Here's a picture ... Notice the electric motor in the front hub. It's a very small motor likely 250 watts. 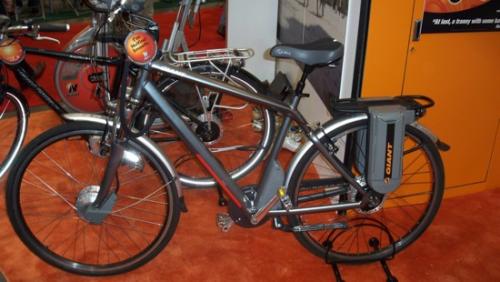 Ahhhh, what is special is that the assist is proportional to the rider's pedaling. Ok, that beats the basic "on/off" that my currie's pedal assist uses. Their website had a video clip on their design....
http://www.invodo.com/Giant-Hybrid-Cycling-Technology/p/X3HRNBUY

I am new to electric bikes. I am in the exploratory stage, as I am gathering information on which bike to get. I have looked closely at the Green Cruiser Thunder, Kysmo, R10, R11 by R Martin and the Giant. Speaking of the Giant, it sure does look like an electric assist bike, even though they claim otherwise. I went to their site and looked at the video they have on it. The bike is pretty impressive, but I am more interested in a MT bike style ebike.

Do you know anything (positive or negative) about the bikes I listed above? I particularly like the Green Cruiser model because it come with 28 inch wheels, nice for riders over 6 ft tall, like me. I just want a bike to commute back & forth to work, 20 miles round trip, mainly on bike trails, no big hills.

Thanks for any information you may have.
Curt

If you see them again and they tell you their bike still isn't electric, take a pair of wirecutters out of your pocket, walk over to the bike, and say, "Then I guess it won't do any harm if I cut these wires and take off this battery, right?"