Republished from: Audi's e-tron concept car expected to come to market in 2012 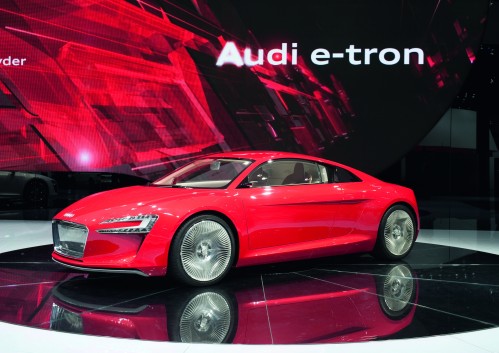 At September's Frankfurt Auto Show, Audi showed the e-tron, a high-performance sports car with a purely electric drive system.  This is a true four wheel drive car with four motors, one for each wheel (what Audi calls a "true quattro").  They claim 0-60 mph times of 4.8 seconds and 35-75 mph time of 4.1 seconds.  Fast.  The lithium-ion battery pack is a sizable 42.4 kilowatt-hours and they claim a 154 mile range.  Top speed is 124 miles/hr.  Audi said at the Frankfurt show that the e-tron "belongs in the major leagues of sports cars."  With spec's like these this car would give serious competition to the likes of the Tesla Roadster.

As a concept car it's interesting but a car like this doesn't make a real difference unless it is in production.  Indeed, this week Audi of America's President Johan de Nysschen stated the e-tron would be on sale in the U.S. in late 2012.  No details on the production version or cost are known at this time.

Because the e-tron has four independent motors the designers were able to design the control system to freely distribute power to the wheels.  This torque vectoring allows for dazzling dynamics and an undreamed-of level of agility and precision when cornering.

Audi recognizes that "Electric drive systems are still very much outsiders" with very few of them in existence compared to the vast numbers of petroleum fueled cars.  They also point to the many advantages.  Electric cars reduce dependence on petroleum for transportation.  Electric cars produce zero direct pollution, which means electric cars only get cleaner over time as the power grid becomes cleaner.  Electric drive systems are significantly more efficient than internal combustion drive systems.  And because the full torque is immediately available in electric motors, they are able to produce phenomenal acceleration and a fun driving experience.

The concept car e-tron is more than just a car with an electric drive train.  They took a holistic approach to combine several factors to make a more efficient car.  They worked to reduce road resistance, increase aerodynamics, use lightweight but rigid materials for the body, all resulting in a lighter more efficient car.

The battery pack is larger than required for typical daily driving needs.  However a truism dogging down excitement over electric cars is the "range anxiety" induced by people accustomed to the illusory infinite range of gas cars.  The truth is gas cars also have a limited range but we have grown accustomed to the inconvenience of stopping at a gasoline station to fill the tank.  One solution to electric car range anxiety is simply to install a larger battery pack.  Of course this raises the price of the car and there is a tradeoff between cost and convenience that is yet to be determined by manufacturers and their customers.   In the meantime we should not expect the production e-tron to have an affordable price tag.

This is a promising car for the niche of people who desire high performance sports cars.  Like the Tesla Roadster it will not be sold in large enough numbers to, by itself, make a large impact in reversing negative effects of pollution from transportation.  But if this car lives up to the published specs of the concept car, it will also serve to blow up the old stereotypes of electric cars.  And by blowing up the electric car stereotype we should see greater acceptance of electric cars, or so goes the theory that Tesla started with several years ago. 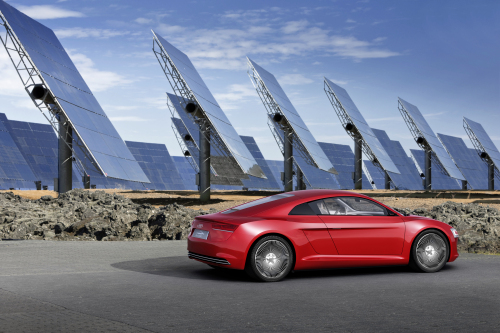 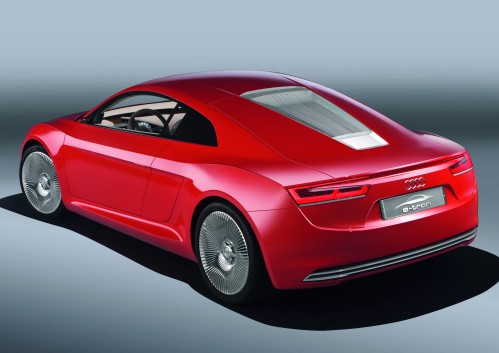 I just sent the following email to my partners...

This car is gorgeous. I'll start saving now! (BTW, I've no idea if I need to add an extra zero or two to the sales goal - but you get the idea!)