In the controversy between FIM and TTXGP the initial take was that FIM's position was to be concerned over a conflict of interest between Mavizen and TTXGP. Both the TTXGP and Mavizen organizations are controlled by Azhar Hussain there is an obvious potential for conflict of interest. That somehow the TTXGP process would be skewed to favor Mavizen or some such.

Further the TTXGP worked with several organizations on setting up standards etc. They worked with an Engineering Institute (The IET) in the UK as an advisory board. They were working with the FIM, and the FIM would not have rules for their version of the racing series if the TTXGP hadn't given them the rules. I made a video last summer with Sadie Homer talking about the process. (see below)

For The Sake of the Game [Updated]
http://www.asphaltandrubber.com/oped/for-the-sake-of-the-game-electric-motorcycle-racing-issues-revisited/

Is part of a series of op-ed pieces discussing the conflict of interest allegation. He makes some great points.

My response to “For The Sake of The Game,” by Azhar Hussain
http://brammofan.wordpress.com/2009/12/10/my-response-to-for-the-sake-of-the-game-by-azhar-hussain/

Azhar Hussain posts a response on BrammoFan's blog, the response is very interesting. He claims the Op-Ed's on A&R are filled with innacuracies. For example "Technical scrutineering for the TTXGP has been outsourced to the Institute of Engineering and Technology" meaning that Mavizen is not getting access to competitor technology, because of an arms length relationship between the organizations run by Azhar Hussain. While Azhar is running both Mavizen and TTXGP, this does not mean (according to Azhar) that Mavizen is privy to everything. "To clarify: I have no access to view any data submitted to the Technical Advisory Panel. Nobody at Mavizen has anything to do with the Technical Advisory Panel. Furthermore, Mavizen and TTXGP don’t share any offices or personnel other than my leadership. The structure of the technical scrutiny has been designed to exclude me from the process. This structure has been in place since the start of TTXGP." 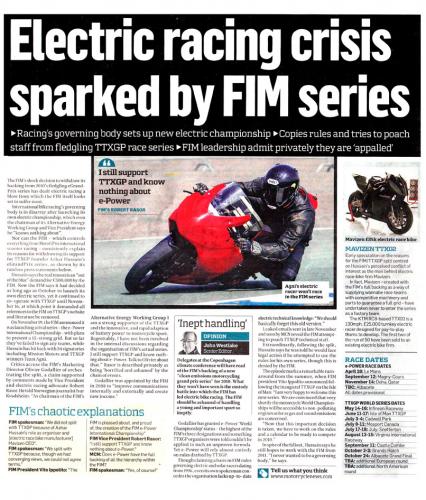