Yesterday morning Richard Hatfield called me up to invite me to what he called a historic race. He explained that there was some motorcycle racing at a track in San Jose, that he'd built a new motorcycle and was planning to compete the bike against equivalent gas bikes. I'm not myself real familiar with racing but I know Richard well enough that he's up to some really interesting stuff, with good connections, and that this should be interesting. I don't know the significance of this very well but it was an awesome day and we showed the gas bike people something interesting.

Turns out the event was a fairly big motorcycle show and race at the Santa Clara County Fairgrounds. Turns out it's around the corner from the dirt bike track where I'd seen the 24 Hours of Electricross put on by Zero Motorcycles a year ago (see - Technosanity #25: 24 Hours of Electricross - Interview with Neal Saiki). The fairgrounds was being used for a larger motorcycle show and Pro Short Track Racing was just one of the events.

So.. to back up a second - I don't have much of a racing background and had no idea this kind of racing existed. What they'd set up was, inside a warehouse sort of building, an oval track about 100 feet long (or so). The surface is the kind of slick concrete in warehouse interiors. The idea is to gun the motorcycle hard at the beginning of a leg, then brake and slide around the corner at the other end, and repeat on the other leg, and it appeared each race was about 10 laps. My jaw was on the floor at how insane these people were. Totally freaking out of their mind insane. Anyway.

But it takes all kinds to make the world and at least they're doing this in a safe environment rather than in traffic... 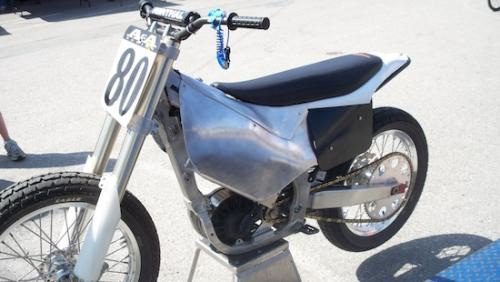 Richard's bike. The frame is a stock Honda 450 bike. A lot of the prep was done by A&A Racing in San Carlos and we were hanging out in their race trailer. A&A is run by this crusty guy who's been building motorcycle racing stuff for well over 50 years and Richard works with them closely. 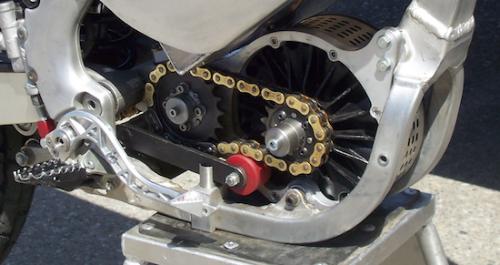 The business end of the bike is an Agni motor, jack shaft, and chain to rear wheel. The controller is from Kelly the battery pack using A123. The pack voltage in the 90 volts range, and I believe it's a 20ah pack (or so). 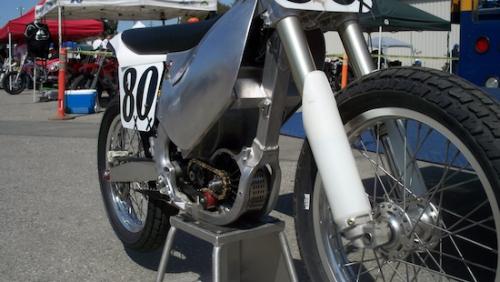 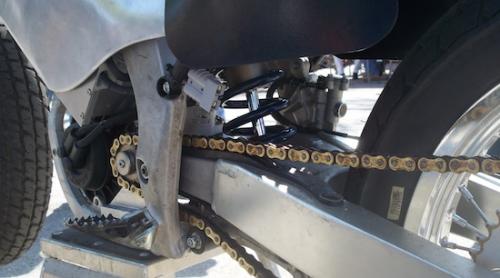 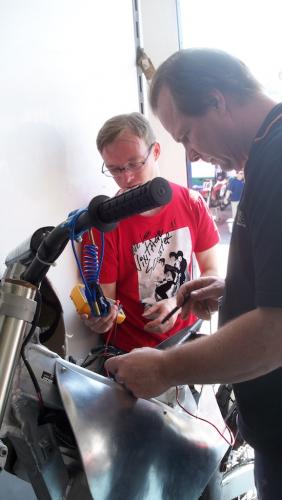 Between the last two pictures they took the bike on the track and was doing a great showing - until the bike suddenly stopped. And thus we spent most of the afternoon with our arms buried in electric motorcycle innards.

See... this bike was not completely broken in, and the motor had first spun the wheel on Thursday. The motor simply wasn't broken in and the controller not dialed in. And this is how you find the limits of things, by going past the limits. Basically the bike was on the track and suddenly lost power and had some of that special baked electronics aroma. Fortunately it didn't let out the magic smoke. 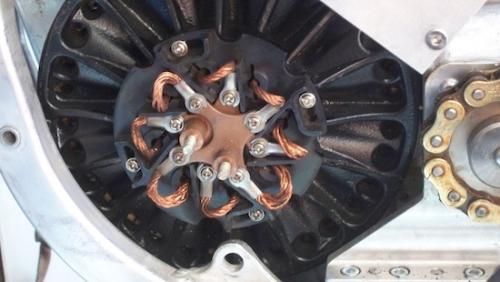 Agni motor innards. Each of those wires goes to a brush holder. 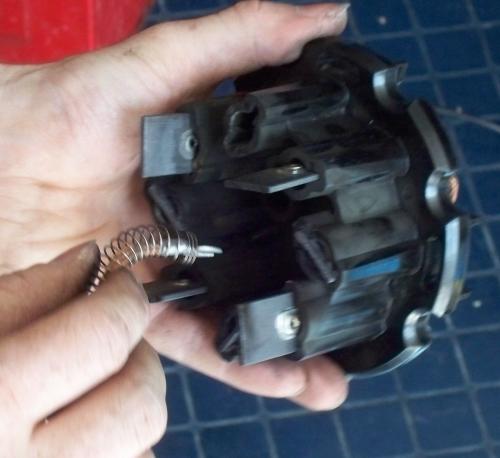 This is the only picture I have of the issue. What happened is that every other brush was stuck and not extended to the rotating part. Further there was some scorches and one of the brushes had a pit in it.

LESSON: Break in motors if you're gonna do high speed stuff. Maybe this motor woulda been fine for a normal bike that Aunt Bessie would ride to her tea party on Sunday afternoon. But for this kind of insane racing where everything is turned up to 11 the equipment should be prepared. 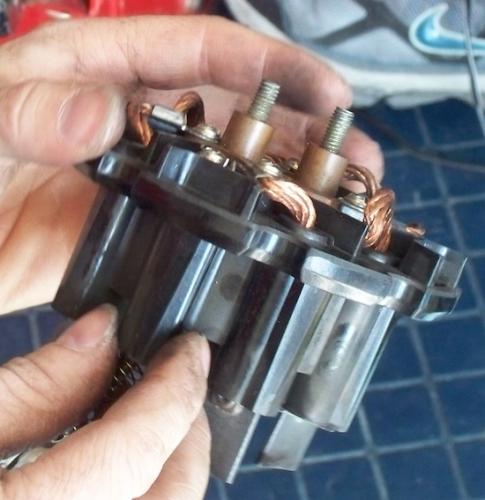 We concocted on the spot some steps to loosen the brushes, and do some forced break-in. It wasn't at all a proper break-in but what you'd do at trackside to get back on the track. It was ingenious, however. 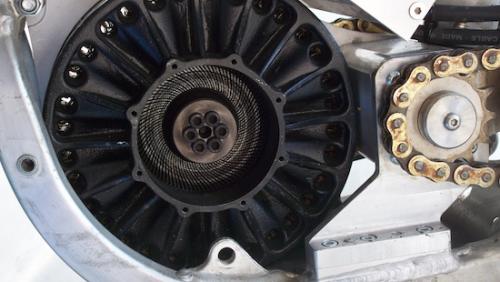 A bit of carbon on the innards, eh? 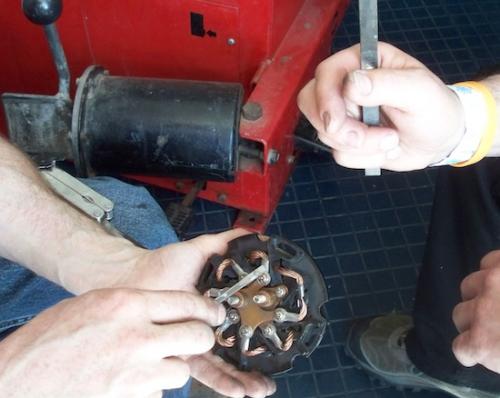 Don't do this at home, kids, unless you have to. 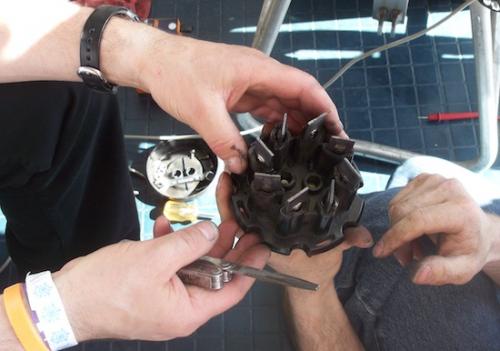 Yes - files were deployed. Not recommended.. but it worked.

Unfortunately I don't have any pictures of the resulting race. We got the bike back together, the pack partly recharged and balanced, and the rider was satisfied. The power level was adjusted down a bit.

They got a slot for an exhibition race halfway through the evening. It appeared to impress the audience and after the race several people approached us that they were excited with it. Hard-core race people excited about electric bikes.

Richards bike was way ahead of all the others through the whole race. Again that was two Zero bikes and Bob's (not ridden by Bob). Richards bike was nearly ready to lap the whole field -- until -- sparks flew out of the motor and again the bike stopped. Another guy got it on video and I hope it will be uploaded to youtube soon. There was the smell of burnt bakelite and other things.

Richard's planning to keep running this bike in several races through the year. Once they get it dialed the right way and perhaps a cooling fan it should do great.