I want add a power system to a Day 6 Journey (7 speed Shimano Nexus internal gear hub) or Journey EX (7-speed Shimano derailleur). In the event that I choose a mid-drive power system (e.g., Cyclone 500-watt kit ($495)), then I would choose the Journey EX over the Journey because I am concerned that the 7 speed Shimano Nexus internal hub drive may lack the durability to withstand the combined pedal and motor power. In the event that I choose a front hub drive (e.g., Front BMC V2-S 600W High-Speed Motor with Torque Arm ($669)), then I would choose the Day 6 Journey with Nexus hub because I prefer it to the derailleur gearing.

I live in Las Vegas, which can be both flat and hilly, but I am not seeking mountain bike gearing.

I would appreciate comments concerning the two configurations that I have described above as well as other suitable configurations. Also, I would appreciate comments concerning LiFePO4 battery selection: 1) 24, 36 or 48v, 2) brand of battery and 3) an online store where it can be purchased. I realize that battery prices vary with quality, discharge rate, etc., and I am looking for a good balance between price and quality.

I have a bicycle with a shimano nexus internally geared rear hub .. and both pedals and the motor drives the rear wheel. This is a historic electric bicycle from the late 90's brand named 'Charger'. There were lots of Charger bikes made and the designers are top notch vehicle designers (they also designed the prototype of the EV1). The design is different from the Cyclone kit but it's a similar idea.

I wouldn't be worried about having a motor driving the nexus rear hub. In fact it has some benefits ... though, most of the benefit is in hill climbing. The reason I say it's not gonna be a problem is the large number of Charger bikes which had been sold and I never heard of rear hub failures. Mine hasn't failed.

My bicycle is running at 24 volts because that's what the motor is rated at. It's easily able to hit 20 miles/hr at the top gearing and throttle at full on level ground and modest pedaling. IIRC the cyclone motor is also rated for 24 volts? At 24 volts however the amps required will be higher meaning you'll have to be careful in choosing a pack that can deliver the required amps. 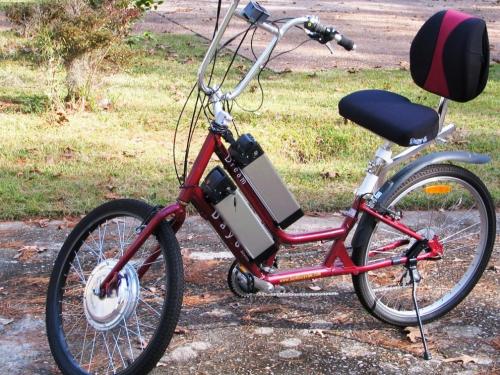 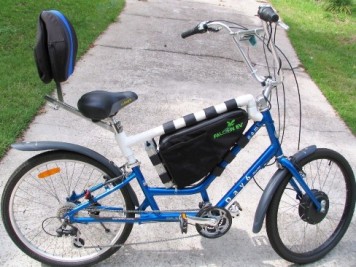