This hasn't been posted on the eGrandPrix website yet but the numbers I have are direct off the official time sheet they hand out in the press room. It was an awesome race on all levels. There was an epic contest between the Zero/Agni bike ridden by Shawn Higbee, and the Lightning Motors bike ridden by Michael Barnes. The way it worked is the Zero/Agni bike had agility and would get ahead on every curve, but the Lightning bike was, well, made of Lightning and would shoot past the Zero bike on every straight. I parked myself next to the jersey barrier just past the grandstand, there is a very tight curve at the end of the track and they hit this straight in front of the grand stand, and for several laps the Zero/Agni bike was ahead coming around that curve, but by the time they got to me the Lightning bike would zoom way ahead. It went that way for several laps and then around lap 8 or 9 the Lightning bike kinda stopped and waited for about 50 seconds. What they explained is there were computer glitches in the control system and the software had to reboot. Literally. The Lightning bike ended up in 2nd place - and even though it paused for 50 seconds it was less than 20 seconds behind in the end, so if there hadn't been the reboot it would have been 30 seconds ahead. Maybe.

A disappointment was the vintage Norton bike built by Team Electra did not finish. It was doing awesomely well and may have ended up in second. It has an AC systems and all the bikes with AC systems use the same controller, which has a sensor unit that has these little set screws, and on their bike the sensor unit totally failed part way into the race.

I have a bunch more pictures and shot complete video of the race. 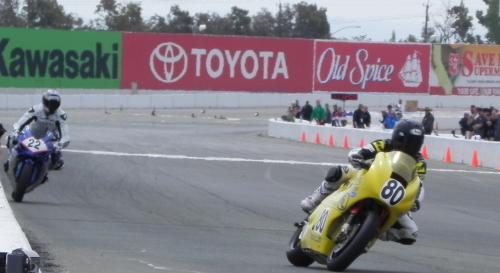