Unsurprisingly Lightning Motors has the pole position, again. Anyway, about the day..

It's flippin hot & humid - this is partly why I'm living in California now, I used to live in Kentucky and it's the same nearly unbearable summer weather. Interestingly they're choosing the TTXGP schedule partly to accommodate the heat.

One of the teams brought a kiddie pool which they're keeping in the pit area. After the qualifying round this afternoon, walking the pits I come across them sitting in the kiddie pool going over the results sheet.

Unlike previous races it's very relaxed in the pit area. Previous races there was a mad scramble to get everything right, suspension, controller settings, tires, etc. There's none of that this time.

Team Electra has the largest contingent of people in their pit. But, this race is local to them. Brian Richardson, the team owner, lives in Bluegrass VA which he says is the least populated county east of the Mississippi. Apparently the place is so remote that Google Maps doesn't even know about the place. He's a part time small town lawyer, part time sheep farmer, and for his birthday he dreamed up this idea to build an electric motorcycle. No background in any electric anything but of course as a farmer he's got lots of experience fabricating things. In any case one thing he proves is that ANY of us can take part and run a team in the TTXGP. Well, this year, in a couple years this may become a more professionally run race series.

Consistently Team Electra has been running real close with the Agni Motors bike, which you see below in the qualifying round results.

The Electric Race Bikes team has switched to a Baby Zilla controller. They'd been using a Kelly controller but at the Mosport race theirs had a catastrophic failure and while Kelly went above and beyond to deliver a replacement controller, which they raced in Mosport, they've since found a Zilla to use. They ran with the Zilla at Laguna Seca 2 weeks ago, and still have it here.

The qualifying race went pretty well - all the bikes looked good on the track etc. The track itself is very technical - 20+ turns, lots of them blind, and going up and down over the rolling hills of this area. 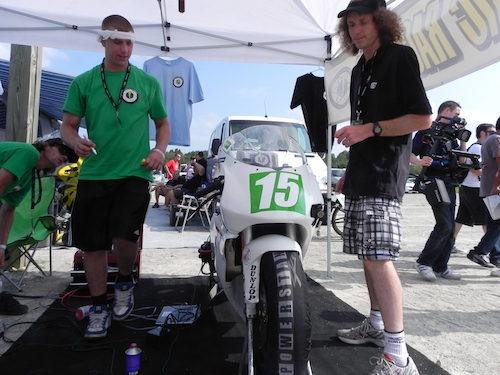 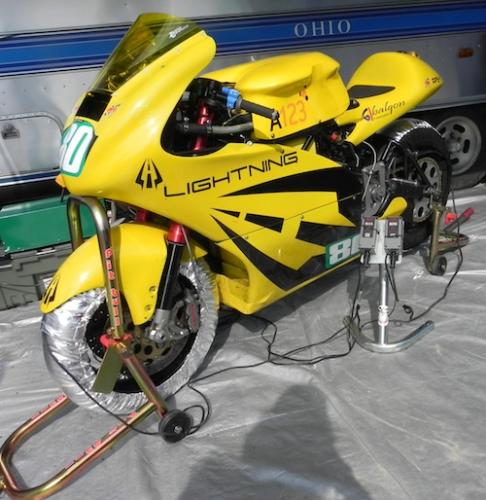 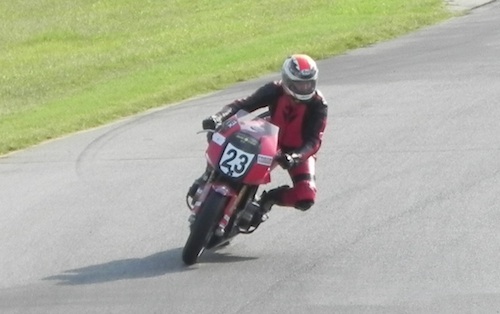 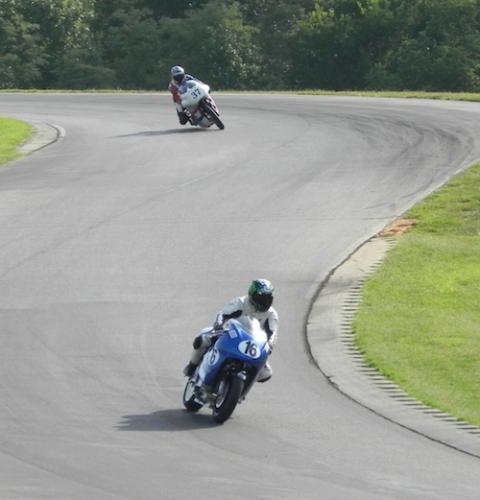 This turn I shot at today - didn't see the other side of the turn, but it looks like the riders are coming up the back side of a hill, along the top, and all of a sudden it drops down this long sloping hill. Rather than go straight down the hill, the track twists and turns all the way down. 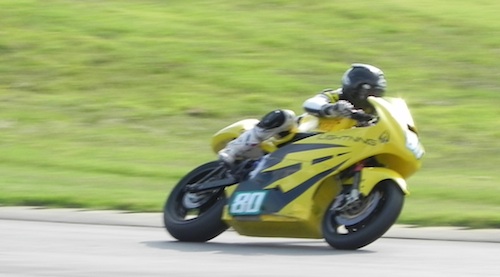 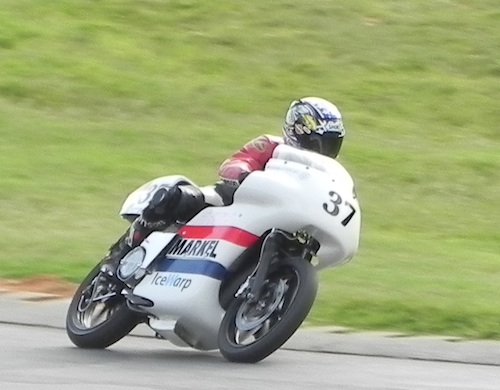 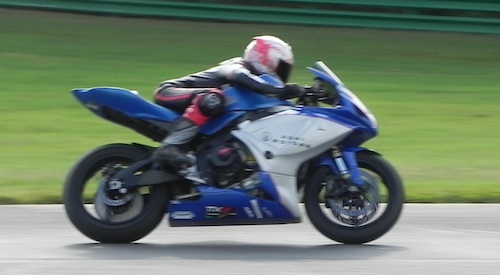 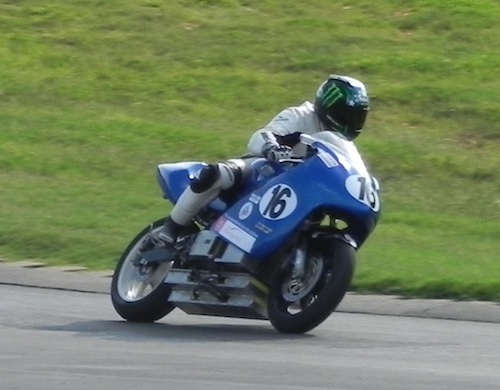 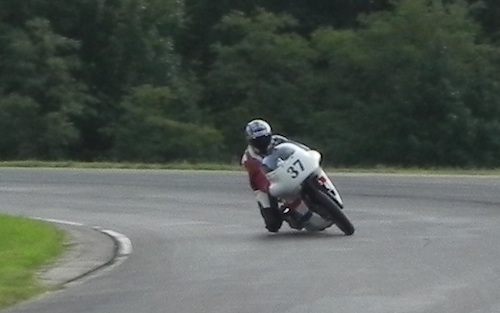 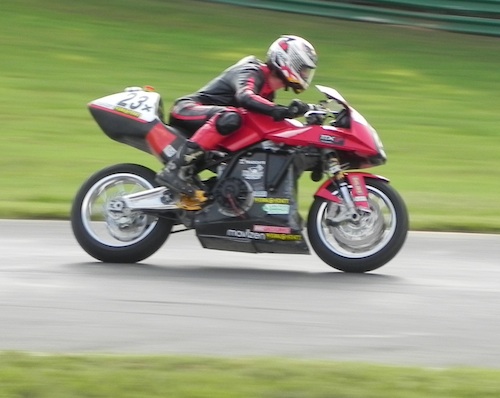 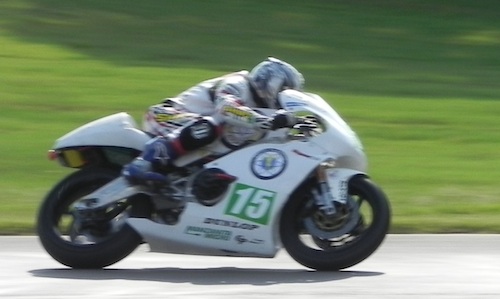 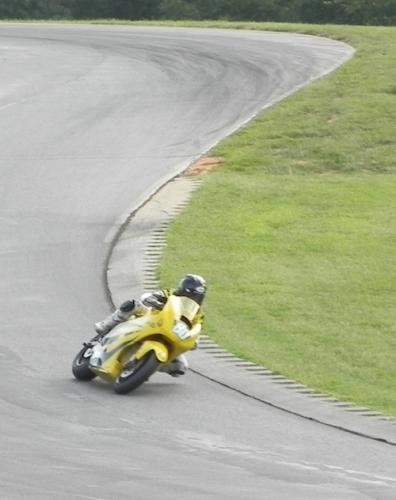 Awesome photos and great details from the race, David. Loved the kiddie pool... you need to get a shot of that. 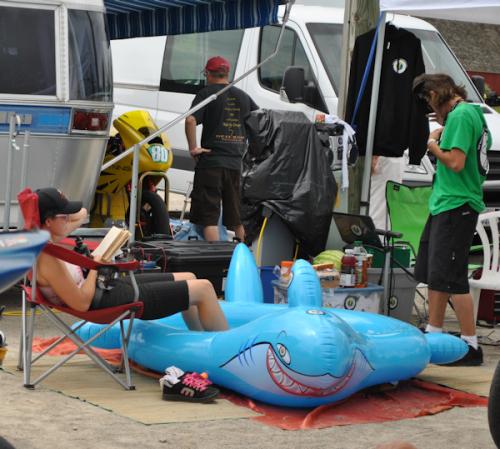 Actually the guy in Electric race bikes pressed the pins hurtly so that the connector is disconnected inside.
It is well-known customers shouldn't open the controller box to find the details.But he did open the controller and modified the PCB.
On the other hand,our CEO drove about 6-7 hours from Chicago to Canada last time sending the repalcement controller KDHB to the team,overnight.

We are talking about the upgrade from 120V controller to 144V controller.It seems they didn't get any achievement in the race after switching from Kelly.

while Kelly went above and beyond to deliver a replacement controller

Maybe you missed an article I published elsewhere: Cooperation while competing in both TTXGP and e-Power electric motorcycle race series ?

That said - while Kelly went above and beyond the call of duty - the story isn't as simple as you make it out to be. I have written an article with pictures etc and have held off publishing it for some reason. The issue isn't that he "pressed the pins" but that the innards of the controller were misdesigned and prone to mechanical failure (broken pins). I used the phrase catastrophic failure because a) the controller became completely nonfunctional b) after having intermittent behavior including some power surges to full power while Mike Hannas was riding the bike on the track. I understand from Matt (Electric Race Bikes) that they've been in contact with Kelly to work through the issues.

It seems they didn't get any achievement in the race after switching from Kelly.

Well, I suppose you mean their standing didn't improve. That's true. He hasn't been able to get programming information about the Zilla, so it's running in its default setting. However the Zilla is at least running reliably...