This afternoon I was able to spend some time test fitting the lithium cells in the car, and ponder the shape of the battery pack.

One reference I've been looking at is this 1966 VW Beetle also with lithium cells - http://www.diyelectriccar.com/forums/album.php?albumid=78 - You'll see its pack is split in two, 16 cells up front, 24 cells in place of the rear seat. The engine compartment has no batteries in it.

At the moment I've got in mind a different arrangement but will need to discuss with Richard first. It looks like it'll mean four boxes which may not be a good idea.

Box#'s 1 & 2 would be in the engine compartment on each side of the motor. Each should be able to hold 10 or 12 or 14 cells depending on the exact outer dimensions of the box. That would mean up to 24 cells in the rear.

Box#'s 3 & 4 would be in the front trunk. One box will fit in what I believe is the spare wheel well, there's a large 12v auxilliary battery there now but should be able to fit 7 cells into that spot. The other box would fit in the center of the trunk and hold maybe 10-14 cells. Behind that box is where the SLA charger currently resides and is where I'd be putting the charger.

This arrangement will fill the front trunk with batteries. I was hoping to have it for cargo, but no.

The rear seat area is huge and is a tempting spot for the main battery box. I'm worried about what will happen in a collision, so obviously the box will need to be anchored very well but maybe it's better to simply not have batteries in the passenger cabin. Also the soft top folds down into the rear seat area unlike in that hardtop VW Beetle. Where the hard top can use that huge back area, folding down the soft top requires part of that area to be free. 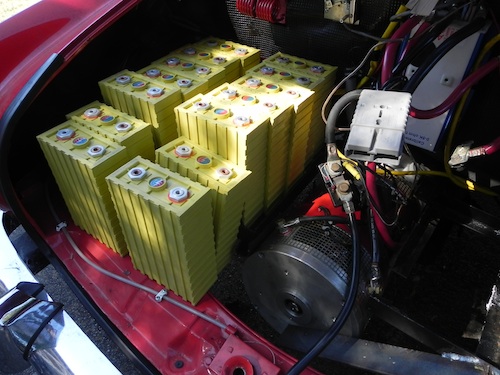 14 cells arranged the way I think they might fit. It'll mean removing the battery tray and fitting the box in place. 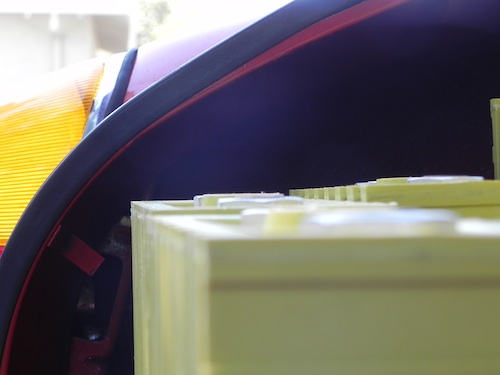 The rearmost of those cells are likely to intersect with the trunk lid. Hence the boxes each might have to hold 12 cells instead of 14. The difference is 24 cells in the rear rather than 28.

One thing about putting cells in the engine compartment is they're behind the rear axle. 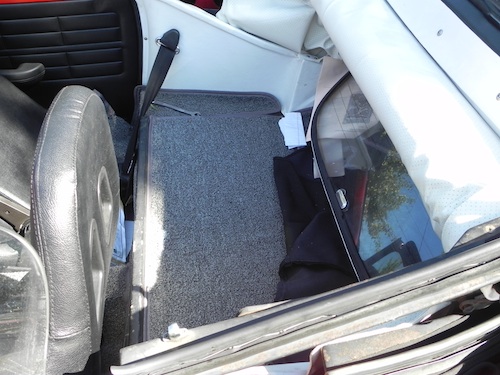 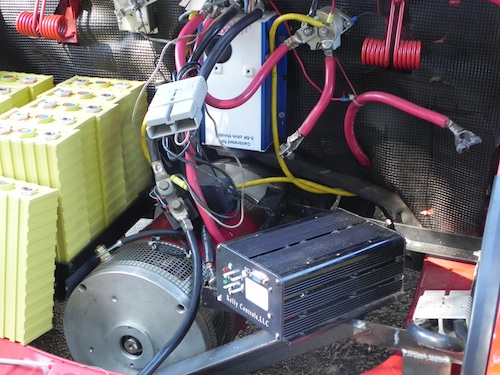 Wanting to make a bit of concrete step forward, I decided to remove the old controller. 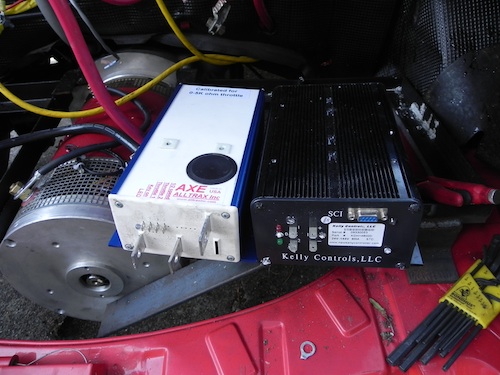 Side by side they're almost exactly the same size. Very interesting especially as they're very different capacity. I wonder if this is going to be an even bigger cooling headache than the old controller. With the old controller I had a few instances where the controller overheated and felt red hot.

Haven't installed the new controller - and am pondering a couple ideas. One is to simply bolt the controller to the firewall as was done with the old controller. If so, then I'll remove the plastic sheet so that the firewall can become a heatsink for the controller. Might also rig up an air channel to pull air from under the car up to the controller but it might be tight depending on the battery box.

The other idea is to build a shelf for the controller to sit on.