Electric vehicle design for the future

As I watch the huge number of new designs come out I wonder if they have actually lost the plot.
Artistic, streamlined, fast, slow, and darn site ugly etc none really practical as a mass commuter car.
If we look at the race car of 100 years ago and look at what they have today.

It is obvious today that fat tires, space frames, and totally enclosed passenger space were the way to go, but not 100 years ago.

So what do we want today in a dedicated commuter car that needs only get to the city speed limit of 50 km to 60 km/h and 2 people to the 60 km daily commute.
It need not be the family car as it would only be used by the worker of the family and the other car can be any that suits the family situation.

It has to be safe and with the racecars they have what I call deflection safety where components like wheels etc are sacrificed to protect the driver.
VW had this with a solid metal central frame and it tended in a head on crash to push the car to one side allowing the mudguard and wheel to deflect the crash.
I have not seen a VW with a direct head on crunch. Always a sideswipe.

So the chassis of an electric car has to have substantial beams or construction in the front that allows approaching solid objects to deflect the cars front from the passengers.
In the 1970s a research team used foam filled alloy box or shapes as part of a car and tested them to destruction.
The result was a huge amount of energy adsorption for the weight and size of the foam filled light alloy components.
An ideal aerodynamic front for any car which becomes a bumper as well.

The battery box then would be the main object to have in front
( batteries are cheaper, can be insured, but dead humans are difficult to replace)

This should not be fiberglass as this is both heavy and brittle so at least a alloy foam filled box . The alloy having crunching energy adsorbing ability.
Behind the battery is the passenger’s compartment.
Now who wants to crawl down to the level of a snake and wriggle into a super slim car?
No we need to approach the car and lift a gull wing door that enables one to walk into the car with dignity even with a child or carry cot in arms.
The next thing is the holding of the passenger in place by the seat belts.
These should have a attachment that has some limited give so that the passenger in a crash is decelerated slower than the car.
The car will be a total mess after a crash but the passengers are more important

These are the obvious things in their design and to date only one, near impossible to make , design has a walk in door.
All seem to be artistic and good looking or practical and darned ugly.

My own design from 1978 has all the features I mentioned.
Is made from 3 sheets of alloy
And tubular frame
It is pleasant to look at but the design could be better looking with combinations of different materials.
Alloy where best used.
Fiberglass where prettiness is needed.
Steel or alloy box section or tube where strength is needed.
So here is my original design And here is the sketch of the newer chassis we never got to produce as we went on then to make an electric truck and all the buyers wanted a 2 seat electric commuter
Oh well we all make mistakes
.

mobility scooters copied car design 100 years ago and still, believe it or not, all have the stupid tiller steering and no bonnet.

Lets hope that electric cars do not follow gas car designs and fail horribly in their practicality.

Before you go thinking about breakaway suspension tabs and the like for a road car, keep in mind racing machines have totally different wrecks from street vehicles. We just don't have to consider the needs of a survival cell cartwheeling over 100mph as another travelling 180mph hits it. I like the idea of a light little car that will survive far more impact than it looks like it can take, as does the MINI Cooper. But to build a little car like that makes it a bit Spartan.

I think the heyday of Colin Chapman's spaceframe in racing was less than 10 years, though it never disappeared. It was surpassed by the aluminum monocque, which gave way to carbon fiber. You can reach as far into the past as you like for useful technology, or even COMBINE them. Just make sure you have designed to your specific purpose, rather than borrowing from something else for purely post modern bombast, as with this golf kart technology in cars, as you mention. You can't do it first, you can only do it either better, cheaper, or easier to understand. I have a spaceframe in my garage to build the LoCost, a Lotus 7 replica; they go nuts over it. (I'm thinking I should have it in the living room, by the fireplace, for certain dates.) People will probably think that's kewl to have a car where you can SEE the racing type frame.

Lotus Elise: Chronology of Chassis DevelopmentAnd they did such a good job here, it also became the Tesla Roadster. How the Lotus Elise works 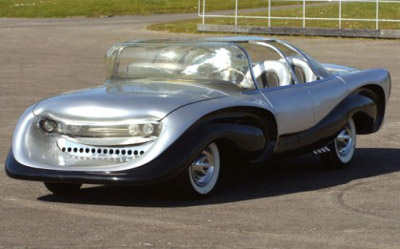 So when I was majoring in English and minoring in Theatre in college, I heard a phrase over and over: "After Shakespeare, it's all been done." So foam crush structure on the front has been done. In fact, it was even used as a "Cow Catcher" for pedestriansm hoping to keep them from getting hurt. Wasn't popular, though. You can see why. I suppose it did live up to the name 'Safety car.'

This is a prototype racer, what people think of as running at LeMans. It's intended to have a body over it. I like it just the way it is. You want to make your car a success, then make it exciting. Too bad Pontiac so rarely lived up to their slogan: 'We build EXCITEMENT.' Well, my Solstice racecar is exciting. . . .

How many guys have I known who had a Mazda Miata until the 1st kid came. When needs change, so does the definition of 'Practical.' People will do without a lot that they need get what they want. And find it hard to tolerate everything they need if they don't get anything they want.

But people will accept whatever they can have fun with.

thanks for the excelent reply
i hope this thread will promote more discusion of what will be the really practical electrical commutor car
like morris did with the mini years ago
i am retired on a pension so cant do what i would love to do.
the car i built 30 years ago is very spartan and had so many inventions in it we had to destroy it in case it fell into the wrong hands (1980)
but i wish i had it today as it would be a proud musem piece as are 2 other evs i built