VECTRIX IS SELLING IN SAN FRANCISCO

According to this news article:

Vectrix is selling in S.F. and the dealer is British Motor Cars

:)
Yes it's true, and there are some more surprises coming real soon.

SFGate
New scooter zips along nicely for pennies per mile

Bay Area zero-emission advocates got their first test ride Thursday on a zippy new all-electric motor scooter that can take two commuters on a silent freeway ride that will cost them just pennies in electrical power.

The plug-in hybrid automobile crowd, in the news these days because of advances in the technology of fuel-efficient hybrids, gathered at San Francisco's Presidio to see the latest wrinkle in emission-free transportation - an electric motor scooter called the Vectrix that can whiz along at 60 miles an hour.

At $11,000, the Vectrix may be a bit pricey, but it is a first of sorts and it will probably appeal to the same high-income people who have ordered the $100,000 all-electric Tesla sports car. "We want to get to the right consumer demographics," said Jeff Morrill, Vectrix's managing director for marketing. "It's for urban commuting, and it targets environmentalists, active (electric power) enthusiasts."

One of those was Marc Geller, a San Francisco photographer who owns a rare all-electric Toyota RAV4. He said of the Vectrix: "I've ridden it and it's fantastic. It's all about the (electric) plug and environmental concerns, petroleum concerns. I think it's totally cool, compared to that noisy piece of crap."

He was referring to a loud gas-powered vehicle that sped past as a few Vectrixes quietly tooled around the Presidio's main parade ground in a public demonstration of the new electric-powered scooter.

The Vectrix is a lot like other scooters - it has the normal right-hand twist grip for power, similar to motorcycles. On a 20-minute ride, a Chronicle reporter found it was pretty good in the zippy department, quite comfortable and, yes, very quiet.

It handled well, its fit and finish seemed good, and it had a trunk under its passenger seat that was large enough to accommodate a motorcycle helmet. But overall it wasn't much different from other, much less expensive, gas-powered scooters.

The 462-pound Vectrix scooter takes two hours to recharge its batteries on 220-volt house current and three hours on a 110-volt current. Its makers say it has a top speed of 62 mph and, when traveling at a constant speed of 40 to 45 mph, has a range of about 60 miles on a charge. It is freeway legal and is sold in San Francisco by British Motor Cars.

The Vectrix looks a lot like modern scooters made by Honda and Suzuki. Its major departure is the fact that it is powered by a small electric motor affixed to the rear wheel. Otherwise it feels the same as its gas-powered brethren.

But it's the price that gets people. Continue>>>>>

New scooter zips along nicely for pennies per mile

Sleek, Green and Pricey -- Zero to 60 With No Emissions. Chronicle Graphic 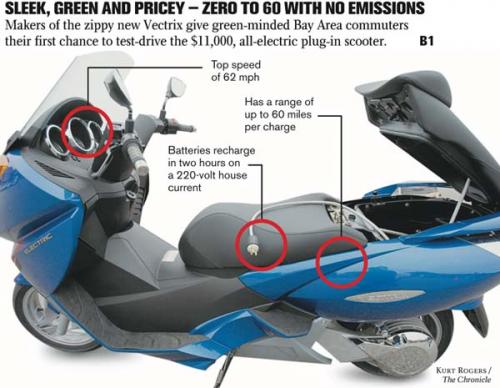 The Vectrix has style, speed, economy, green credentials, a silent ride, and an $11,000 price tag that makes most scooter shoppers blanch. Chronicle photo by Kurt Rogers 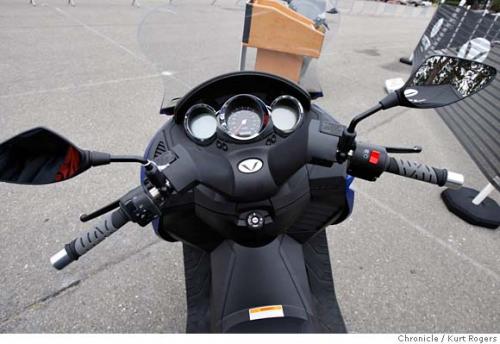 Morris Friedlander takes the Vectrix electric scooter for a silent spin around the Presidio. Chronicle photo by Kurt Rogers 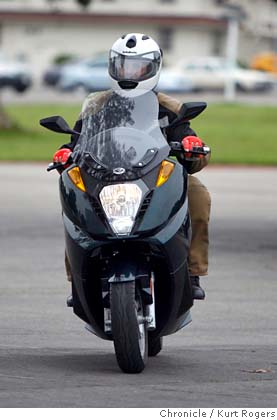