Revenge of the Electric Ninja

Revenge of the Electric Ninja
By Bill Moore 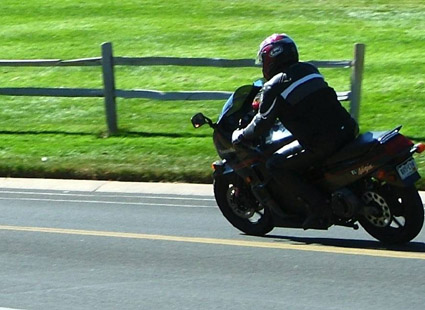 PHOTO CAPTION: John Bidwell's El Ninja electric motorcycle has an electronically-limited top speed of 65 mph. In stop-n-go city driving, it has a range of just over 40 miles and costs less than $2000 to build if you already own the donor machine.

John Bidwell shares some of his 'Secret of El Ninja' on how to beat the high price of oil and have fun while you're at it.
Open Access Article Originally Published: May 05, 2006

Okay, if you're addicted to gasoline, exhaust fumes and loud noises, then this story isn't for you. Just ignore it and get back to paying an arm and leg for imported oil, ruining your health and destroying your hearing. There's nothing here for you, so just keep... cough, cough... motoring on.

But, if you're looking for an affordable way to get back and forth to work at normal highway speeds at distances of less than 40 miles and you're fed up with ever-higher gasoline prices, then stick around and give a listen. John Bidwell has something that might just interest you.

John lives in Fort Collins, CO and has been building and converting two-wheeled vehicles to electric drive for years now. I rode two of his motorbike-like creations in September, 2004 at the GOing conference in Boulder. (There's a picture of John on one of his machines in the photo album section of this article). He's authored three how-to manuals on the topic, the latest being his "Secrets of El Ninja" in which he details how to convert a Kawasaki "Ninja" sport bike from gasoline to electric drive. His other books explain how to build a simple electric motorbike and how to build a "chopper"-class electric motorcycle.

What you come away with after talking to John is that while these machines have their limitations, mainly in terms of driving range, they are serious candidates for a low-cost way to immediately end your dependence on -- or "addiction" to -- petroleum. You don't have to wait years for a viable, highway-capable electric car from Mitsubishi or Subaru, assuming they'll even sell them outside of Japan, or put up with the shortcomings of neighborhood electric cars. And best of all, a project like John's El Ninja conversion will cost you less than the price of a top-of-the-line laptop computer, and you can pretty much assemble it yourself without needing to do any welding. If you can cut metal with a hacksaw and use a ratchet wrench, you can build this bike -- assuming, of course, you already own a suitable donor machine, which John sees as being something from the early 1980's era with a lot of engine block space. It's here where you'll eventually mount your 4, 5, or 6 12-volt RV batteries; that is "RV" as in recreational vehicle batteries, available at your local K-Mart or Walmart.

John's goal from the outset has been to provide people with an affordable, easy-to-build pathway into electric drive transportation. Doing it through two-wheeled machines like the El Ninja and El Chopper ET, greatly simplifies the process and keeps the cost low. Converting a motorcycle is the easiest EV conversion out there: you don't have to have a transmission, deal with air conditioning, power brakes, power steering, etc., etc., etc. And you can scale up the performance and range as you gain confidence in the technology and your own skill set.

John recommends beginning with something as simple as a 24-volt machine which utilizes just two, inexpensive lead-acid batteries: he prefers common Group 24, 85 amp-hour, "watered" versions because of their lower cost over sealed, AGM-type batteries, though if you dump an AGM-powered bike, there's less chance you'll spill battery acid on yourself or the machine. It'll have a top speed of under 30 mph (which keeps it in the moped class) and range around 20 miles or so, depending on terrain and the size of the driver. Adding more batteries increases both range and performance, as well as weight and cost. He sees the ideal street machine being 72-volts, which will get you to 65 mph in a short burst, but you'll quickly drain the battery and possibly overheat the motor. He's run driving tests around Fort Collins on his own machine and found that in normal city stop-n-go traffic, he's gotten as high as 41 miles on a charge.

He pointed out to me that while 40 miles is a very realistic range for his machine, which weights just 50 lbs more than the stock gasoline Ninja with a full gas tank, you don't want to continually deep cycle the batteries because it will shorten their life. A 20-mile round trip commute, instead, would only use half the energy in the battery and as long as the owner keeps the battery continually charged while at home, the batteries could last upwards of five years before having to be replaced at a cost of about $300 a set.

So, some quick math suggests that the replacement cost of the batteries after five years would equate to just 1.5 cents per mile plus the cost of electricity. John estimates that driving an electric motorcycle costs just one-third that of a gasoline model. 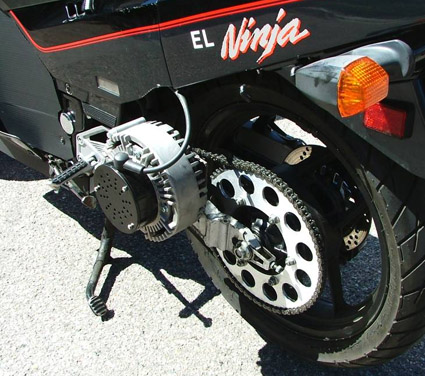