XM-2000 by JDH: The Back Story & First Impressions 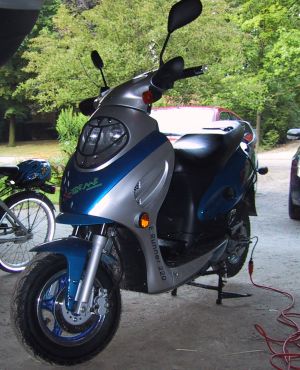 My scoot happily charging away...

I got the blue one (which apparently is less popular than the red one - which confirms my suspicions that I don't know squat when it comes to fashion ;) ).

I've been getting more and more interested in EVs for a while now. I'm a car and motorcycle enthusiast. Nothing extreme - but I do like most all forms of cars and bikes and I've owned a wide variety. However, with the war in Iraq and the obvious (in my mind anyway) links with our dependence on foreign oil I've started to want to do my own little bit by using an EV and encouraging others too as well. After watching Who Killed the Electric Car I started to get more interested in the advocacy aspects of EVs. Personally I've come to a conclusion that I don't believe in conspiracy theories and I think that GM has every right to recall and crush the EV-1s if they don't want to service them. However, I do believe that (a) the big car makers could build an EV if they wanted to & (b) they clearly don't want to & (c) it's pointless to try and make them.

I've written a couple of advocacy pieces that have appeared in my local newspaper in support of EVs. The second one was much longer than the essays they normally publish and they even gave it a nice big headline with accompanying graphic of a Zap-X. However, I still wasn't driving one - and it was starting to bug me!

I nearly purchased a used EV from EV Trading Post - but at $6500 for a beat up 92 Celica it was too rich for my current budget. While surfing I came across the XM-2000 and decided that a scooter was the best place for me to start with "experimenting" with EVs. Mechanically it doesn't get much simpler than a scooter. Cost wise - I couldn't build my own for the price of the XM-2000. Buying a new scooter would also make the tinkering aspect much more pleasant (have you ever skinned your knuckles on a cold November day working on an ICE? I have and it ain't much fun!).

As I started researching I came across this forum (thanks to a friend at work) - and it gave me lots to research and after looking at other models I decided to go with the XM-2000. The other comparable scooters are either (a) more expensive, (b) not as powerful, (c) more powerful but apparently limited to 30mph, (d) not actually available yet. Quite often they were a combination of 2 or more of those "deal breaking" attributes.

I realized that I was paying bottom dollar for a Chinese import and that there were more than a few tales of woe about damage caused during shipping. I knew what I was getting in to - but I decided to take the risk. As it turns out I got very lucky: the bike turned up in 99% perfect condition...

I figured even if it came out of the box in pieces (a) X-Treme would likely ship me the bits piece by piece & (b) I'd still be ahead of the game compared with doing a complete conversion myself.

I bought my bike from ArticFox at BaseStationZero - I highly recommend him. He's open, honest and has a lot of integrity. So much so that he's stopped selling the XM-2000 on his regular site because of the shipping damage issues. However, if you want one - contact him and let him know you understand the risks and I'm sure he'll see you right...

I was so happy when my bike arrived with hardly a scratch (the chrome like coating on the end of the twist throttle has rubbed through in one spot to show blue plastic underneath and there is a slight scuff on the right front panel). The packing was pretty substantial - however why they didn't spend another couple of dollars and strap it down within the carton is beyond me...

The biggest bummer about the delivery experience was the weather! After weeks of dry weather and the occasional overnight shower it was raining the proverbial felines and canines. Ack! I waited. I watched the radar over at weather underground. I waited some more. I got bored of waiting at home so I went to wait in line at the Secretary of Wait (err, State). When I got my turn I gave them a copy of the VIN from the plate on the battery box and a copy of my PayPal receipt. Oh I was so close - she was entering the details and that moped registration sticker was nearly mine. Alas, she checked with her supervisor and they decided that I needed a signed bill of sale with the VIN written on it. They gave me a form to fill out - ArticFox to the rescue! He's sending me a signed form tomorrow afternoon.

So, I'm reasonably confident that I can get this registered as a moped.

At last it stopped raining! My first run was just around the block (because I had to be home to meet my son back from day camp). To be honest it was a little disappointing - but that was mostly user error and the fact that I didn't go far enough to try it out and the roads were still wet and a little slippy. My second ride was even shorter! I rode it down to the end of the street so that my son could practice riding his new bike (he's 8 and has just graduated to a bike with gears!).

My wife came home and at last I was able to test it out for real. OK, so more about the user error. As you might know the XM has 2 speed settings. A low speed for take offs and steep hill climbing and a high speed for cruising. The manual describes a red button for low speed and a green button for high speed. My XM has 2 red buttons: a really cheap looking red push button sort of off by itself and a red button with the symbol that looks like it would be the starter on a motorcycle. So - I "decided" that the starter button must be low speed and the other one high speed... I had a 50/50 chance, right? Well this explained my initial disappointment - I had them backwards. So, starting in high speed didn't offer very good acceleration and when I thought I was up to speed switching to low speed just caused the bike to coast. When I figured out my mistake things went a lot better! 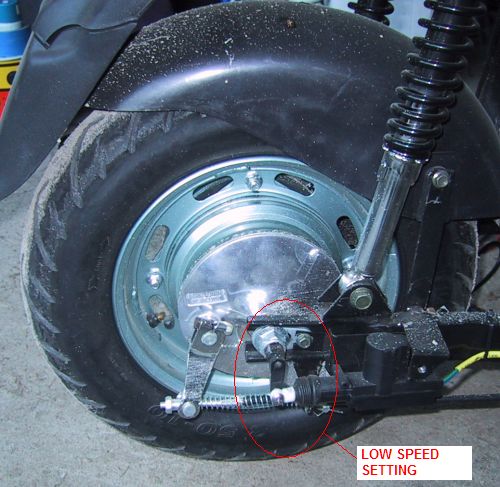 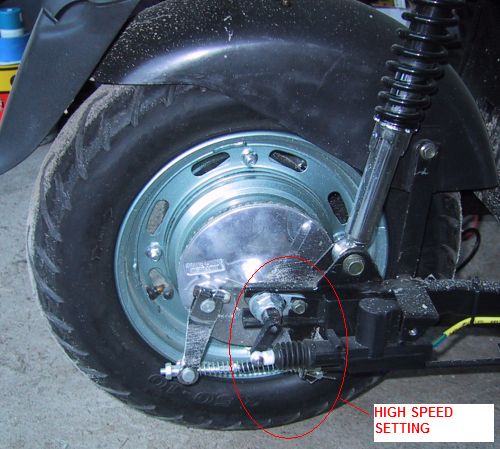 For my first longish ride I went cruising around town. Ann Arbor is a small city - most of the roads around town are 30 or 35 with a couple of 40 mph limits for the bigger roads leading in from the freeways. I think this is where the XM is at its happiest. I was able to zip along with the traffic and for the most part never felt like I was holding anyone up. The couple of exceptions were on some hills when my speed dropped below 30. All in all though I think this is the ideal bike for around town commuting.

When I got home from that run I went to Home Depot to help the wife choose ceiling fans. The battery was now starting to show signs of weakness with the gauge dipping into the yellow. On the way back it fell into the red. When "deep" in the red it cut off power to the motor - luckily this happened just as I turned off a busy 40mph street and into the 25mph sub-division. I switched to the low speed mode and was able to ride the rest of the way home.

All in all I did about 35 kilometers (at least I presume the odometer is showing km because (a) it's reading high and (b) the primary speed show on the speedo is km/h). That's about 21 miles - which is pretty good seeing as I wasn't trying to drive it "carefully" - just like I'd drive any bike. 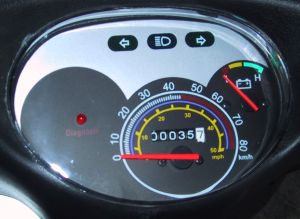 3 days a week I commute 12 miles each way. The building maintenance manager has agreed to let me plug in and charge while there. So, I think the commute will be fine from a range perspective. The speed limit when out of town is 50 for most of the drive with one stretch of 55. I can cruise at around 37 to 40 - so it shouldn't be too bad - but I will likely be holding up some traffic (believe me, with my driving record that's a first!).

Is the XM-2000 perfect? No. I think it needs a little more speed for my out of town country road cruising. I also think it needs more pickup - 0 to 20 is fine but I need to get from 0 to 30 or 35 to feel comfortable and avoid that SUV breathing down my neck. But that's fine by me - I bought the bike to tinker with.

Is the XM-2000 good value for money? Absolutely! For $1500 ($1600 delivered) it's a very capable round town cruiser. Of course, at the moment I've no idea about long term ownership issues!

There are currently 2 users online.