Help with my purchase (e-cruiser/e-runner 220)

New to the forum and need some opinions. Fed up with waiting for an EV vehicle, I have decided to make a purchase but need some help with the decision.

I weigh 154lbs and live in a relatively flat area but I do have several short steep hills to negotiate and a couple of short stretched of cars going 40-45mph. My shortest daily commute is about 10 miles and my longest could be as much as 20-25 miles (out for lunch and errands ofter work).

Can you guys give me your thoughts on the performance, range, speed, etc. of these vehicles and maybe what you think fair prices for these might be?

Here's my 2 cents worth:

1) I just got an XM-2000 which is labeled "E-Runner 220" on the front panels. It's a 60V system with a 40amp controller and 38Ah of Silicone batteries (I still haven't tracked down the exact chemistry - I think they're a lead-acid derivative). I'm 155 lbs - my scooter will cruise comfortably at 35mph. At a push it will do 40mph. I've had it to 43mph on a downhill stretch. This is all "indicated speed" - I aim to take out my GPS and see how much variation there is between the speedo and actual speed. So far I've gotten a range of about 22 miles. I plan to commute to work 12 miles and charge it while there (it only takes a couple of kWh @ 11 cents each to charge). That range is "normal/real world riding" - which for me means mostly "wide open throttle" with some 2/3rds throttle while on 25mph sub-division streets.

2) Are those two models actually available - if so where are you buying them from? Or are you going to make the Li-ion one yourself?

3) The Cruiser sounds nice - it should easily outperform my XM-2000. It's a (55*60) 3300 watt system vs. my (40*60) 2400 watts - so I would imagine you'd have around 10mph more top speed (maybe more - but don't forget that (a) scooters are aerodynamically challenged & (b) wind resistance goes up with the square of speed). Of course - it's possible that the system is speed limited (check the specs). In terms of range the LiFE batteries will help because (a) they're lighter and (b) they have a better Peukert exponent (which in simplest terms means that they can deliver more of the amps from the amp hour rating of your battery). I've heard that a 40Ah LiFEPO4 pack is roughly equivalent to a 60Ah lead acid pack - so I'd expect your range to be well over 30 "real world" miles.

4) The Runner sounds marginal for your use. At best I'd say it would be the twin of my XM-2000 - however 20Ah of NiMH batteries are questionable to me. They are lighter and they do have a slightly better Peukert rating - but would that make up for having almost 50% less capacity? Personally, I doubt it. The good news though is that if you go with the Runner it should be fairly easy to upgrade to higher capacity batteries (if you change chemistry you'll need a new charger as well as new batteries - if you stick with NiMH but higher Ah's then I don't think you'll need a new charger). If you go this route I'd suggest scrap and replace on the batteries because to get more Ah's you need to add a pack in parallel with what you've got - and that's likely to be impossible with space constraints... To give the Runner it's due - it probably has slightly better acceleration and top speed than my XM - based on the numbers provided. Stop by Ann Arbor and we can race ;)

BTW, As well as being the same weight as you I have similar driving terrain. I'll start using my XM for commuting next week and I will post more findings on my blog (at this site).

Remember this is all just my advice - and as with all advice it's worth less than what you paid for it!!!

Thanks for your thoughts! Very helpful. Both of these bikes are custom jobs by falconev.com (Andy).
Seems like the eCruiser will fit my needs but the pricetag is tough right now. Trying to make it work but...

Anyone else out there have any thoughts on performance or appropriate costs for these bikes?

Can you charge at work? I'd first look into using lead-acid paired with a fast charger. With prices falling for the new lithium chemistries, I think it makes sense to wait a while. They also need more real-world EV testing to be considered safe in my opinion.

Are you a DIY type? It might be worthwhile to consider a conversion, or buying one already done. http://www.austinev.org/evtradinpost/ << There are a couple really good motorcycles up now.

BTW, that site (falconev.com) is terrible! :jawdrop: I can't make sense of it, otherwise I could get a better picture of what you are looking into. Can you post more specs?

I'm working with Andy at FalconEV on a scooter as well. Yes, the site is not the greatest, but Andy is very helpful and willing to work with a potential customer. He was very responsive with my questions and seemed honest with his answers. He was the best salesmen that I dealt with trying to get information about electric scooters. I tried dealing with a few dealers.

I tried to ask GreenEMotor about their scooters and was getting close to getting one of their scooters. I didn't feel comfortable with the answers I got from them. Seem too pushy and the answers were not entirely correct. I also later found out they were selling the older e-runner and e-cruiser models that have the smaller controllers and motors. Then, I learned of FalconEV and started discussing what they had to offer.

` vinnie_basile ,
Welcome to our V is for Voltage Community, we're happy your here. It seems like several Community Members are already helping you.
You can also check out our Electric Scooters Over 1500 Watts Collaborative Hand Books.
Good luck

BTW, has anyone ever mentioned to Andy how confusing his site is?

So, sick of waiting and ready for a suburban-abled scooter.

I am getting ready to order this thing:

Should be very similar to the Zapino being discussed in another thread just without the 30mph limitation.

I've been working with Andy from falconev.com (yeah, his site is absolutely horrible but he has been excellent to work with over email)

Anyone else got any flags to throw up, warnings to heed, or words to the wise to give? I'm nervous but not willing to sit and wait on technology that government, big business and at-large consumers are opposing.

How much will that cost?

I'm still working out the price of my bike with Andy. It won't be cheap, though... 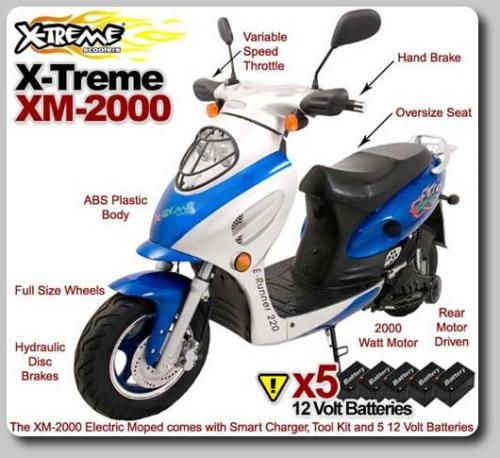 `
Well that seems to confirm what Mountain told me, I bet they were the old models with the defective shifting, and e-runner got rid of them or rejected them because of it.
May also explain the VIN/MSO problem in the same States where e-runner is sold. E-runner doesn't want to be stuck for any warranty etc so poor copies were made changing the name on the documents to X- Treme and increasing the possibility of duplicate VINs since we already know they don't open the shipping box to check any thing.
X-Treme has been advertising there XM-2000 for over a year, but they never had a image of it or price, which I thought was strange. I even posted the question on the old Forum about it, so that's how long it's been.

That could be the case - I bought mine as an introduction into tweaking it. I sort of see it like a complete set of parts for a discounted price. At the moment all those parts are working just fine - I've got about 100 miles on it so far. No problems shifting - it did trip the circuit breaker on me once (after a long stretch at wide open throttle) - I just pulled over, turned off the power, pressed the reset button and then I was back on my way.

I probably won't actually have time to do any mods until the Fall - at which time the warranty will be long gone anyway. Vinnie - what length of warranty are you being offered? The XM-2000 has a whopping 30 days, parts only warranty.

GMan wrote, "I bet they were the old models with the defective shifting"

I'm not entirely sure about that. Granted, you're right, it does suck to have to do the shifting. All-automatic would certainly be ideal. But I remember reading the review of the E-Runner 220 that I posted on another thread:

It indicated the same problems with both the 160 and 220 versions, not knowing for certain what gear you were in, the shifting mechanism, etc. And that was from January 2007.

A couple of comments about shifting:

1) At first I thought that there were some sort of gears in the hub (like those pedal cycles with 3 gears in the hub). Now, I'm wondering if there aren't any gears but if it's not a contactor switching between serial and shunt modes: ("a contactor is used to switch the motor between serial and shunt mode, to improve low-end torque at take-off and maintain performance at higher speeds" - per rgx on http://visforvoltage.org/forum/control-systems/1482). Does anyone know for sure? I'll open up my hub at some point and take a peek.

2) I think it would be relatively easy to create a crude automatic shift modification. A small speed sensor that would flip a relay at a set speed would probably do it - any electronic hobbyists out there want to suggest a circuit? To be smarter about it one could try and combine speed with load (so as to enable down shifting on steep hills). Load would equate to power being drawn from the controller - which would be voltage * amps. Voltage is easy to measure - how easy (cheap) is it to measure amps for a simple electronic circuit like this?

3) There seems to be confusion between "defective shifting" and "less than ideal shifting". GMan - did Cheng say that the shifting actually breaks? Or was it more just the fact that next years model is fully automatic (or better in some other way)?