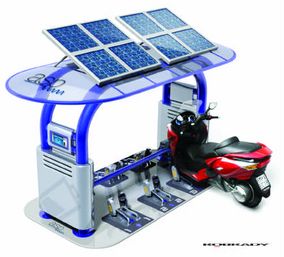 Vectric Shareholder Report Shows Promise For Electric Super Bikes
The Vectrix shareholder report for April 2007 just dropped into my lap. Besides some beautiful eye candy, the document lays out some important milestones reached by the company; as well as future developments underway for the vehicle line. Here are some of the highlights:

>>Financially, Vectrix has firmed things up by appointing HSBC to undertake a strategic review which could lead to a flotation. Such a move could would see the company valued at up to £200m. Yee Haw. Additionally, the big V might put itself up for sale to attract a larger company or interested private party. We’ll keep our ears open on this one.

>>Besides its launch in the EU late last Fall, Vectrix now poised to push the new all-electric bikes in the UK (indeed, they launched yesterday) and in the U.S. by the end of June. Over 2,100 customer reservations in the U.S. alone are waiting to be fulfilled. The first 700 scooters allocated for the American market will see a roll out in major U.S. cities so as to increase visibility of the product. Look for the bikes in Seattle, Austin, Portland, San Francisco, Newport, and other locales. By the end of 2007, there will be up to 50
official Vectrix dealers in 8 countries (Italy, Spain, England, Portugal, Switzerland, Greece, Australia, and USA). Plans are already underway to expand distribution to Japan, France, Germany, and Israel.

That looks really cool for a refueling station. Now we need to start seeing them pop up on every corner. Have some way to check in your bike or lock in place so that while at work it is recharging. Maybe complete parking buildings built with these in place, for both cars and bikes. PARK & CHARGE

Who will have the 1st parking building that only allows Electric Vehicles to be parked? Maybe there is already one? Build It & They will Come Charge.

` ;)
BTW, did you notice it was Solar?
So when you travel away from home or something, you can still recharge it, without leaving a Carbon footprint.

The bike too is solar? that would be so cool. I see the refueling station is solar, but pulling one with, o yea they fold down to pocket size, that would be even better when traveling. hehe ô¿ô would be nice if everything worked like hollywood.

I can see a future vectrix coming with a fold out cloth-like solar panel. It would be a great way to cover the bike to keep the sun off. Anyway, that charging station looks awesome. I know this is off topic, but I think its a great novelty, and many people would be interested in charging from the sun. Sounds like a really neat business opportunity to set up solar charging stations once more EVs are in operation. People wouldn't mind paying something like $.25/kwhr for solar energy if it had a coin drop in type thing.

dumb move I think. If they really are getting some great sales, why sell the company? All they need is a big oil company to buy them up and kill it.

I'm not really surprised it was expected. It's the School Bully that thats your lunch money, Oil companies are not just going to sit on there hands and give up business. Armed with a record profits, and a very oil friendly administration it was expected.

My greatest fear is that such companies (E-Max, EVT, Vectrix), once successfull, will be bought
and killed by the bigger companies who will want to maintain the same level of revenues they are used to with gasoline motorcycles.

` yzabary ,
Welcome to our V is for Voltage Community.
:( Sorry to say it is a very strong possibility, as speed increase and Battery Technology improves unless we begin to unite and begin speaking out.
I still say" If a Tree falls in the Forest and there is no one there to hear it, does it make a noise?" How many people even know we exist?
Change has never just happen on it's own, we need to join with other established Groups that share some of our same Visions and begin speaking out, or the next Movie will be "Who Killed the EV ?" and we can raise our hands indicating we sat by silently and allowed it to happen.
Global Warming is a fact, just occasionally using a EV won't eliminate the problem, but it sure won't add to the problem.