The "control unit" seems to consist of a few relays and a butchered plugpack which floats around in the box. It seems that I am supposed to connect the mains to the Vectrix charger through this box. As far as I can determine without tracing the tracks on the PCB, it is supposed to switch off the mains when the battery is charged. 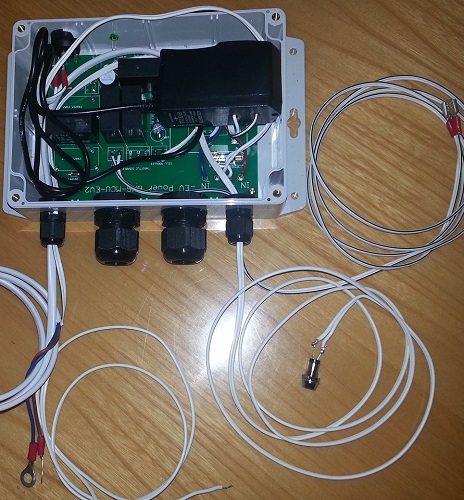 Since I am not going to entrust a $4000 battery to a pile of components which I don't understand, I started by testing the BMS modules. I hooked up the modules to a Lab power supply. A Fluke multimeter was connected via separate leads directly to the module and a second multimeter was used to indicate the state of the Solid State Relay (SSR) on the module. Like this: 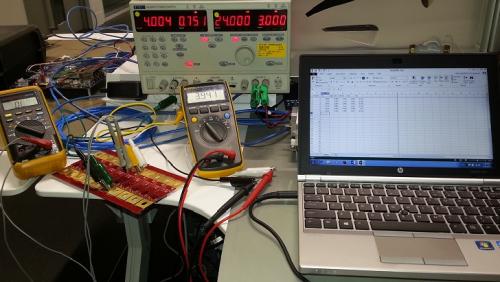 It took about 2 hours to measure all 42 modules. Here is the data: 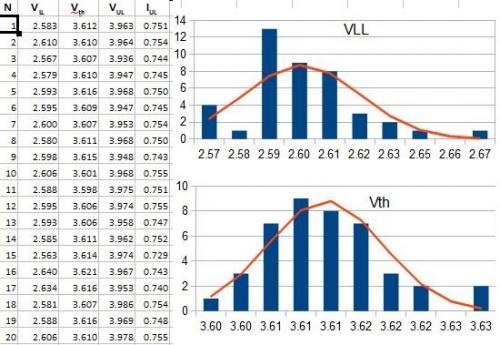 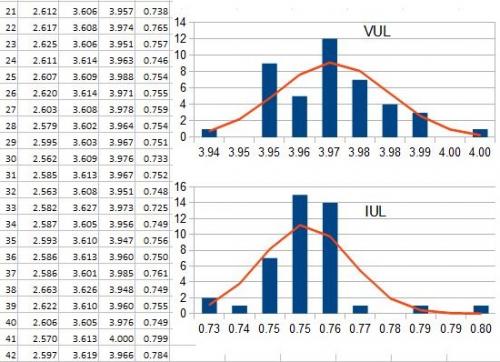 In retrospect, I should have also recorded the shunt current at maximum allowable battery voltage which is 3.65V for the CALB CA66Fi cells. However, the current rises rapidly from Vth and reaches around 0.5A at Vth+10mV.

The only parameter which approaches a normal distribution is Vth. For the other parameters the production process seems to be less well controlled.

A significant worry is VUL. As can be seen from the measured values, VUL is 3.965V (average). This is 0.315V higher than the maximum allowed as per the battery datasheet. This is also the voltage at which the SSR switches to open circuit (OC).

However, the real worry is that the control unit does not know when the first cell has reached it's maximum voltage and the BMS module starts shunting current. By the time the SSR switches to open circuit, at least one cell will have been cooked for a while.

The maximum shunt current achieved by the BMS modules is 0.8A, some only get to 0.73A.
I don't think that shunting 0.8A when charging with 10A or 15A is going to make much of a difference to a cell.

How it ought to work

To properly manage the battery and to be able to equalize the pack, the charging system needs to have at least 3 states:

A "real" charger should of course also have a state for the case where the initial VBatt is below the lower limit, timeouts, alarms, etc...

I have the wrong BMS modules. They might be designed for cells which have a Vmax=4.0V (maybe Thundersky?). They also switch at the wrong time.
The modules don't seem to be suitable for the cells I have because:

the max voltage on LiFePO4 cells is 4.3v - that's when part of the electrolyte starts to break down

between 3.4v and 4.3v, a separate action is occuring. the short of it is if the voltage is held above 3.4v at low current the cell is being overcharged, just in a different way to going past 4.3v

That's partly why the official Vectrix Lithium bikes have such a high failure rate - they balance by holding the fullest cell(s) at 3.6v while shunting ~1A past for hours at a time.

3.65v is the usual cv stage voltage for charging a LiFePO4 battery, which is why that number is in the datasheet, but it is not an outer limit.
The data sheet assumes you are using a cc-cv charge profile

The job of the BMS is to do two things:
1) stop the charger from over-charging any one cell, either due to imbalance or the charger going crazy (a very real problem for the ESD chargers)

The above can be achieved without measuring at the cell level, its just a shame that such a product does not exist (although i know of one under development)

I have tried centralised BMS's that have a wire from each cell going to a central box.
I just couldn't find one for 42cells, or even groups of smaller ones that could disconnect the charger or not also cause other issues.

so I use a cell level BMS

The cells themselves do not become unbalanced unless they are overcharged or have been over-discharged (due to mirco-shorts).
Their self discharge rate is 0 and the coulomb efficiency is 100%

The tricky thing with a cell level BMS is it does introduce discharge at the cell level, and it isn't exactly even
So balancing becomes necessary, of which top balancing is the easiest

The upside to that is if you do over-discharge a cell, without killing it completely, the BMS can usually keep the battery balanced

For a substantially unbalanced battery, the BMS will disconnect the charger during the 10A stage. This is actually less stressful on the full cell(s) as when charging at 10A, 4v is a lower state of charge than 3A@4v
When that happens, it means the imbalance is too large and indicates a problem.

The BMS only has to deal with a minor imbalance, anything more (for instance after replacing a cell) and the balancing should be done manually

as a side note: LiFePO4 cells come from the factory at either 50% or 100% SOC, depending upon the manufacturer (CALB and WB is 50%)

The first charge after putting brand new batteries in will usually end with the BMS disconnecting. If the capacities are close together (CALB usually is) then the pack will top balance over the first dozen or so charge cycles.

VLL just has to be above 2V. basically if a cell is below 2v at no load, you want to be paying attention at the start of the charge.
2.5v is probably a bit conservative, but that's ok.

VUL has to be below 4.2v, for obvious reasons

Vth has to be above 3.5v because you don't want to be shunting just because you are fast charging (above 1C continuous or during hard regen).
it should be close to the average charge termination voltage (in this case it's 153v/42 cells = 3.64v)

As far as wiring the BMS, that gets covered along with a host of other details in the conversion video (part 8):
http://www.youtube.com/watch?v=ocv-aiQoq3g&list=PLCFDD8780E3FBEFD5&index=8

Having said that, in the video 40Ah cells are being used so the layout of the cells is a little different, however, the BMS is the same.

For posterity a clarification received from Matt:

There is actually about 1 minute of no charge between those 2 steps during which the battery voltage falls back to well below 153V.

It really is pathetic that I had to reverse engineer the BMS controller.
Anyway, here is the circuit diagram (done with TinyCAD): 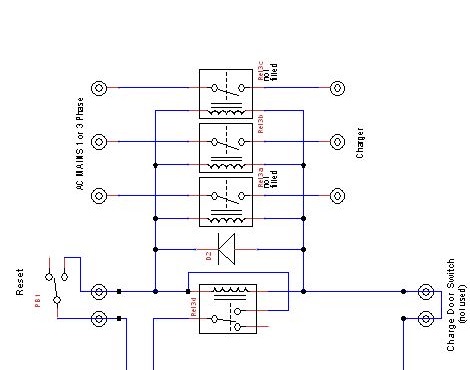 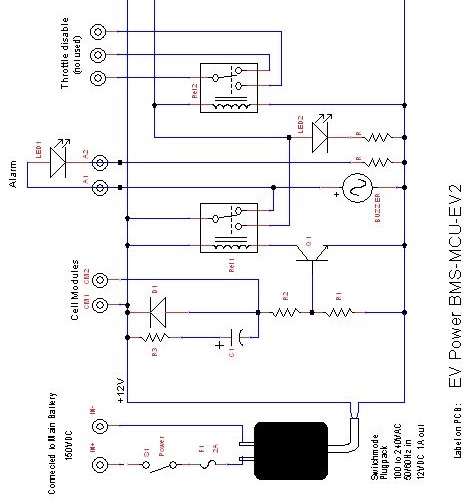