There's been a long running debate about whether it's bad to put TS LFP cells on their sides.

We've spoken to several people about this - including Thundersky. The answer is both yes and no. Or to put it another way - it depends which side. 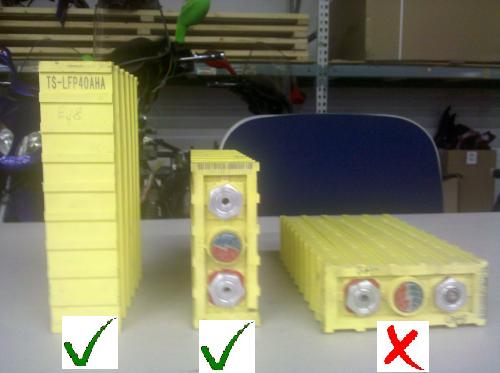 Explanation: Yes, as a lot of us hypothesized, it's to do with electrolyte level - however, it's not really to do with the safety valve. There is only a small amount of electrolyte in each cell. The plates "wick" the electrolyte so they need to have their "feet in the water" so to speak. Imagine the plates having a sponge cover (I am not a battery engineer and I don't know the exact construction details!). When they sit in electrolyte they can soak up more. If they don't have contact with the electrolyte pool they will dry out and become ineffective. So when the cell is flat the top plates can suffer from electrolyte starvation.

When standing upright or when on the narrow edge the blow-out valve can function without venting electrolyte. Note the blow-out valve still works with the cell on it's side but it will vent some of the electrolyte while doing so. However, by the time the blow-out valve pops your cell is too far gone to recover (regardless of whether the electrolyte remains in the cell or not). This valve is a last stand safety measure - not a means of normal operation. Even lying flat the valve has achieved it's main purpose - preventing a dangerous build up of pressure. It just did it more messily than when the cell is in the other two orientations. 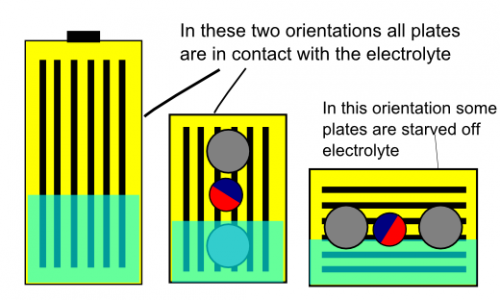 I hope this info is useful and helps to further the community's understanding of the TS LFP cell and it's usage.

That's a reasonable explanation. I've been a proponent of the vertical arrangement, but from your explanation, it could be argued that the laying-on-its-side may be the most ideal position. 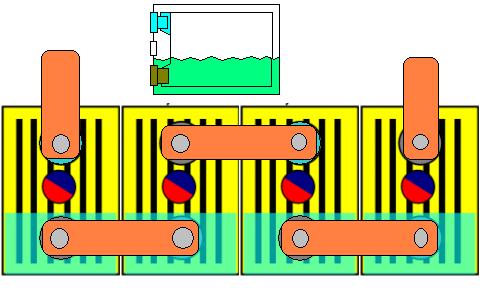 It might be worth considering what happens to the heat generated on the connections to the battery terminals.
Some of the cells types built had a weakness in the connection method and the internal resistance due to this connection was significant.
Also the interlinks and bolt method when loose would cause heat.

But for the terminal on the top they are dry.

So it might be worth checking the temperature difference of the upper and lower terminals.

Also what is the boiling point of the electrolyte.

Some cells are water based but many are organic solvent compounds and I assume have lower than 100degC boiling points.

There may be a more severe case of venting when a fault occurs at the terminal of the cell causing it boil the electrolyte, which would vent out the valve.

When the cells are mounted with both terminals not submerged the heat is not in direct contact with the fluid.
So the fluid won't boil. The cell gets hot, but the fluid is kept in and the after the fault is fixed the cell still has plenty of electrolyte to keep the separators wet.
And the cell will keep working. If it the electrolyte level falls to a low level the sperators can't keep wet and the cell starts to die...
(I wonder if some cells appear to have depleted capacity could be repaired just by adding fresh new electrolyte.)

Any way that's my take on it. The cells might operate fine and not leak.
So that's fine for transport or under very safe conditions.
But keep in mind things go wrong and over heating can occur.
Then what happens.

Any way that's my take on it. The cells might operate fine and not leak.
So that's fine for transport or under very safe conditions.

However, bear in mind one possible problem with your hypothesis is the amount of electrolyte present. In my diagrams (and consequently in yours) we have about 1/3rd depth. However, my understanding is that it's actually less than that. The reason being quite simple - the electrolyte is very expensive and they carefully monitor and put the minimum amount required in each cell. So, I don't actually know if the electrolyte will be in contact with the terminal. For sure one terminal will be closer than the other - and we will test your hypothesis (but not today I'm afraid).

But keep in mind things go wrong and over heating can occur.
Then what happens.

If something goes wrong the cell vents. Once the cell vents the cell gets replaced. We never take our cells over 3C (which is their continuous rating - never mind the 10C peak rating). So, in normal operating conditions the cells don't get hot. Now, if something is wrong and the cells are getting hotter what do you achieve by having the cell continue to work - yes, it could be considered a more robust system but your range and your battery life will be down. One could argue it is better to actually have it fail earlier and have the cell replaced and the root cause diagnosed while under warranty... Just another way of looking at it.

I'm thinking the arguments for replacing any vented electrolytes would be similar to the Lead-Acid problems that occur frequently when they are overcharged.

As many people have mentioned that when a Lithium Cell has reduced performance suitable for an EV it could be used for other stationary energy storage.

The main point is people have been using the cells in the upright position for some time. They may work on their side with out the liquid covering the vent but this may show up other issues that aren't normally observed.

How hot do you expect the terminals to get after a long hill climb.

When a cell vents does the plastic logo pop off. I don't think it does.

I remember seeing a pull down of a HI-POWER Lithium cell and seeing a small amount electrolyte poured out.

Also thinking that even if the liquid doesn't cover the valve when an EV is stationary I imagine the splashing action under braking, acceleration and cornering is going to throw liquid over the valve at a time that the pressure in the cell is venting out the valve.

On a motor bike or scooter this is even more likely and frequent event. Even just leaning on side stand.

So I'm starting to think that if your choosing a cell it should be able to work reliably during charging and load mounted in any direction that would allow the vent to be submerged.

A lifepo4 battery with free electrolyte "slooshing" sounds really weird to me... Are these official data from thundersky or just guesses?

My fault, too many "o".
http://www.wordreference.com/enit/slosh

My past experience was that with brand new Thundersky/Winston cells and GBS cells, some "sloshing" of free electrolyte can be heard when the cell is shaken, but after a couple charge cycles, all free electrolyte disappears.

Who has longest life record of Pioneer winston battery ? how many thousands kms?