Has my charger died?

OK, I got the resistor out without disassembling the charger (only had to unsolder the three wires in front of it, so I could pull it out from under the main board with tweezers). I had to push the board up just a smidgen with a screwdriver wedged between it and the small board below it. Just a tiny bit, not much as something could get damaged if bent too much!

The resistor is burnt, no markings that I can see, and it measures 1MOhm, so it is toast, I imagine. Unless someone tells me it is supposed to be 1MOhm, and I'll put it back in:)

Here is a photo of the resistor taken out (with the three wires unsoldered). Any idea of its value? 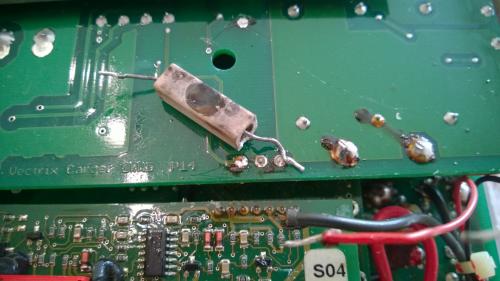 Hi Kocho,
On My ESD, this location had two 220 Ohm resistors in series in that spot next to the big red capacitors. 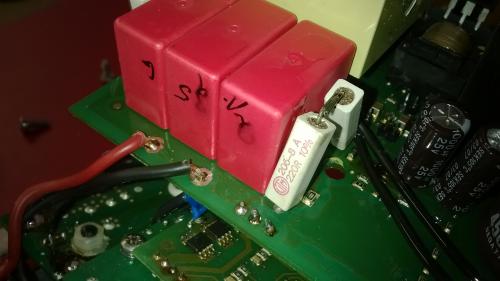 In your photo, I'd be quite concerned about the burn mark on the capacitor next to it. I'd be surprised if that
capacitor is not near the end of it's life as well, just because of the damage due to the burned resistor.

While I am posting, I'll relate my ESD Repair attempt from an earlier post in this thread. Cor was right about the
transistors being damaged in the circuit as well. I replace the burned up SiC Diode with the closest one I could find,
a CREE C3D20060 at DigiKey. I then put the charger back together and attempted to charge the NiMH pack in the VX-1.

The FETs blew immediately - here is the photo: 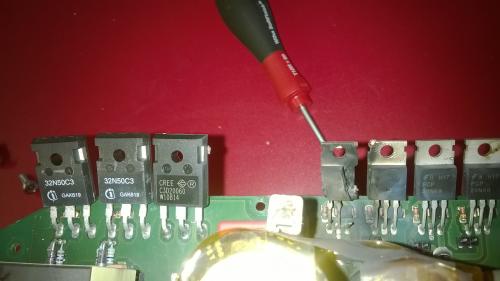 I also noticed a couple things that probably contributed to the failure in the first place.
1) The fan on that side of the heatsink was sticky and would not start. So, those power components received much less cooling.
2) The outlet I was using to plug in the bike was old and made a poor power connection. I would often have to wiggle the plug at
the line receptacle to get the charger to start. I suspect these transients cause a lot of stress on this already marginal PFC
front end circuit.

So, my advice to those who still have working ESD chargers is to check and replace the fans with new good quality fans that have
bearings in them. Avoid the cheap bushing fan types with lower life expectancy.

I have given up trying to fix this charger, and I now have an Elcon that I am mounting in the same place on the bike as the old ESD
charger. Details on this may be in another post later, if I find time.

Hmm, that's less than half the 1kOhm value I saw earlier in the thread... Anyone else know what they have? I wonder if there are different revisions of these circuits, because I definitely only had one resistor there.

On mine I can see the remnants of an "A" and "%" on the right and the circular shape on the left, just like I see on your photo. But the rest of the writing is completely gone even though there are minimum burns on that side of the resistor - the text has just faded away - gone...

By the way, I reused someone else's photo from earlier in the thread (so not my charger's photo with the burn mark on the red box). I can't see if I have similar burn marks like they have on their photo, as I have not disassembled my ESD, yet.

EDIT: I managed to peek at the element next to the burnt resistor. Yours and in the photo I reused are red. Mine are grey. And the one next to the resistor is burned pretty good on the outside from the heat... The way I saw it was to shine light through the board - it is translucent enough to illuminate the underside and see the melted surface when looking through the space between the two boards...

The Vectrix with death ESD chargers, were supplied with 240V AC or 125v AC?

"Hmm, that's less than half the 1kOhm value I saw earlier in the thread... Anyone else know what they have? "

Mine appears to be a double 220 ohms as well (like Zoompig's) tho I con only partially see the side of one of them as I have not dismantled my charger more than... a bit. All I can see is top row '20...' and bottom row '22...' but no signs of overheating at all.

Got my parts in the mail today. Used 2 five Watt 1kOhm resistors in parallel (gives 500Ohm at 10W). Also replaced that suspect burned-looking MOSFET. Plugged the charger for a few seconds - nothing. That is, does not charge (it still works fine otherwise, properly controlling the gauges on the bike). The resistors heat up quickly and a lot. Unplugged to prevent further damage. Probably a good thing I put a 10W resistor instead of 5W, or it would have burnt like the old one. I could smell the heat after I unplugged. Something must be shorted after these resistors, which will require further disassembly to identify, unfortunately.

My digital multimeter apparently can't measure in diode test mode (tried it on some good spare transistors), so I will need to get a new one. This old one has served me well for probably 25 years now and still works fine, but to troubleshoot the ESD further I'll need the diode/transistor test mode...

Hello, I am not sure whether this is the right section for my problem. Anyway, I own a Vx Li+ (bought new on October 2012). It has been upgraded to 65Ah AESC battery pack (otherwise known as Nissan-Nec-Leaf battery) on December 2014. I have been riding some 3500km on the latter battery pack (out of some 13500km of the bike life). A Runke Gold 2.1 (programmable up to 1.7kW, but usually set on 1.5kW) is the charger installed on my Vx. A couple of weeks ago the dashboard suddently stopped showing the "est range" (0 km) and the right gauge always showed 17 bars (no consumption). Moreover I cannot switch the dashboard to the "technical mode" any longer. Apart from that, the bike rides ok and the charger works too (I checked it by the PCAN-USB adapter and the VectrixDiagnostic software): I get the battery charged every morning (after a night charging) with the "EC 049" charging final code ("finished normally"). Cooling fans work properly. I was told it is probably a DC-DC converter failure inside the charger (the board responsible for 5V/12V supply). Before starting to disassemble it, I would like to share opinions with you about the issue. Any hint is welcome. Thanks.

What did you do with the old ESD charger? I am guessing you bought a Runke that died in 2015 that you fixed with a fuse, but are the guts of this thing still around?

I still have my ESD (non-working) plus one more ESD (also non-working) in pieces. If time permits, I'll troubleshoot mine. Why, do you need some broken ESD guts?

I'm much happier with the Runke, other than for the loud fans. I think it is more reliable and looks like it is easier to fix, or at least get to its "guts" and find out what's wrong. The ESD looks like a more purpose-built thing, but it is so tightly put together, you can't easily take it apart...

That's why I'm still holding on to my two broken ESDs for the same reasons. Keep an eye on eBay - I bought my Runke there from some who got a bunch of them and other stuff from the Vectrix liquidation auction.