Vectrix Owners in the UK

Hi Alan thank you for your help with the piks. im not sure about the ICM but as you say that amount of power/ current could have dun all sorts of other damage as its right next to the can system . i opened up the ICM all looks clean .
Later if i get the chance ill strip the MC and ICM from the other bike and fit then with its original charger to see where i am then .
My options are going forward at the moment and getting it running with NIMH or go for the lithium conversion any thoughts any body.
Is there anyone on the forum who has a new V with the Lithium – Ion Battery and 3.3 kw charger ? are they any moor reliable than the old modles .
looks like a good day regards chris

Good morning all hope you are all well.
Hi is there or dose anybody know if these boards can be repaired or is it a case of mend it with a new one.
Is Vectrix up and running after lock down and who do i contact for parts getting on well with the reassembly.
If this is converted to lithium will the clocks and ICM need reprogramming /firmware.
any one have any paint codes for the perlesent white Vectrix help on this wood be gratefully appreciated regards Chris

Hi Chris,
I don't know if Vectrix Parts in Poland are able to repair damaged controller boards but it might be worth sending them an email.

Try VectrixParts.com for any parts you're looking for and see if they have stock and ask if they are currently able to deliver.

I seem to recall that the Charger and Motor Controller firmware both had to be updated but the ICM update was optional but recommended.
This may vary according to who's firmware you install (The Laird's or Dugas).

Some Vectrix colour codes can be found here. 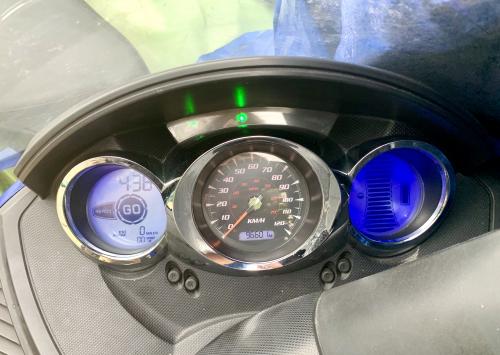 Got all the cells up to reasonable voltage, reconstructed boxes front and rear with temp sensors as per c-diagram. Total voltages front 64v, rear 72v = 136v. Used bulb for in-rush to connect. Put bike on centre stand with rear wheel off ground, turned key to on, pressed left/right brake levers to get to ‘GO’ position with side stand retracted. All does as it should, no warning lights apart from normal green lights. Tested all lights, low/high beam, left/right indicators, horn, all work. Throttle back and it runs as normal with Regen on release, reverse also normal. Have ridden as normal around garden on grass as no mot, tax or insurance. Front tyre is 32 psi and rear 40 psi. Right power/fuel gauge showed full bars and after 0.5 miles in garden dropped by 1 bar.

The range on left gauge shows zero and when you plug in to charge with bike switched off and on side stand I can only hear the rear charger/fan which also only comes on for about 28 seconds then the bike completely turns off. It didn’t fully put the 1 bar of fuel back in during this time? I seem to remember this was what was happening a few years ago when I stopped using the bike as could not charge it as normal but the fuel gauge showed almost empty back then so I thought the issue was below minimum volts required to operate the charger. This clearly is not the case now.

I thought the charger would try and do one of its periodic equalisation charges given the length of time since it was asked to work.

Your thoughts would be appreciated.

First image is after switched on and second is while on charge 28 seconds. 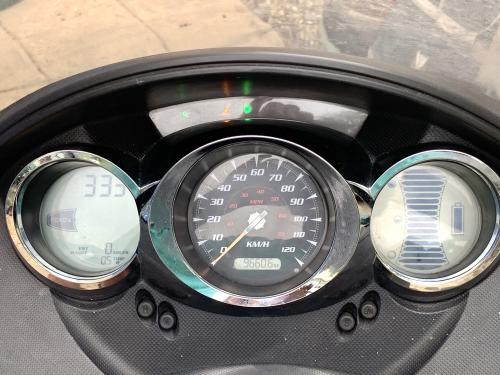 Hi Chris, good to hears it's back in one piece again.

As the battery was not charged using the onboard charger it probably can't calculate the range because it doesn't know how much charge has been put into the battery.
I'm using the Laird's charger firmware which displays the actual battery voltage, which is far more useful to me than the original guessometer (estimated range).

The original Vectrix charging firmware would typically try to charge at maximum power to 151~154V, so I would expect yours to charge until the indicated target voltage was reached, or the battery gauge was completely full (as shown in the video below).
The video demonstrates what happened when I tried to top-up the battery after it had previously been fully charged and then been left standing unused for several days, the battery gauge would still be showing as 100% full, even though the battery was no longer fully charged due to the self discharge nature of NiMH cells combined with the higher residual current draw of the early motor controllers.
It would charge at just 3 Amps for ~5 minutes before eventually shutting down completely:

If I then used the Scooter Diagnostic program and the USB CANbus adapter to reduce the battery gauge level, the charger would then charge until either the target voltage was reached, or the battery gauge was completely full again.

I don't know for sure because I cannot easily access my charger's cooling fans to check, but after looking at the following picture, the two fans appear to be wired in parallel, in which case they should both come on together: 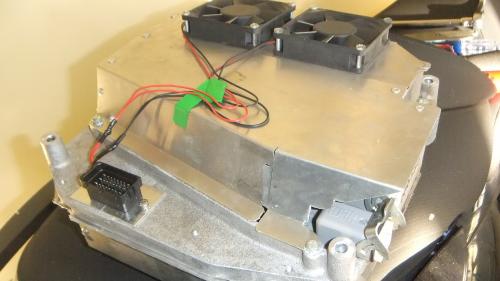 The two battery cooling fans should also both come on together during charging, but I have noticed that one fan will often start up slightly quicker than the other, and occasionally only one fan will actually work.

136V is not too bad, but I would expect it to be at least 145V if the battery was fully charged with the original Vectrix charging firmware.

I think you definitely have a charger problem as the "Ready" light is on in both of your photos and there is no indication of the "CP" or "CC" or target voltage in the centre odometer position which should be displayed during the charging process.

I would try unplugging the front and rear temperature control boards from the wiring harness connectors and see if it affects the charging.

Thanks Alun. It will be a real shame if I can’t sort this issue after all the hard work. Will try your suggestion to disconnect the temp wires and see if it charges normally. If not, what to do? Cheers Chris

If the charging problem is not being caused by a fault on one of the temperature sensor boards it could be the charger itself.

Unfortunately, without having the USB CANbus cable and scooter diagnostic software it is difficult to see what might be causing the fault.

If the problem still persists with the temperature sensor boards disconnected, I suggest that you contact Vectrix-Scooters.com in Poland and ask for further advice.

If the charger turns out to be faulty and has to be replaced, they will hopefully have replacement units in stock.

I need a charger for my Vx-1. I noticed there's one on the Vectrixparts.com website but they don't seem to respond to people in the USA. Does anyone have a suggestion for what i can use?

Hi Alun, I have tried your suggestion of disconnecting the temp sensors, one at a time etc. The battery level has significantly dropped after a month or so of no intervention after manually recharging the cells outside the bike and reconstructing the bike with the remaining, non charging happening when plugged in.

Reconnect rear temp sensor and disconnect front sensor only.
Front charger comes on 30 seconds then cuts out. No warning lights.

Disconnect front and rear temp sensor.
CP000 then CP 151. Temp and battery red light sensor warning light comes on. Speedo shows 110 kmh an hour for 30 seconds with charger at the front on and then stops.

I've got a 2008 Blue VX-1, still on NiMH, HX58ALO, currently sat in the garage. In the past I've pulled the battery packs apart, culled some failed cells and re-assembled, replacing the temp sensors while I was at it.

It was running fine, but then suddenly started refusing to turn off or to charge. The only way I could shut the bike down was to pull the Anderson connector. I notice that if I try to re-connect using a lamp as an ICL, I get quite a big current flow down the wire with no bulb, to the extent that it heats significantly. I tried pulling the front fairing off and dis-connecting then re-connecting the igniter (suggested by Vextrix Poland) but no joy. I've left the bike partly dismantled since I might just paint the panels while I've got it in bits.

Not sure what to do next, given the lack of support here in the UK.

Any genius on here know what I can try?

I have 2007 VX1 in Bristol UK. Tried sorting battery issue last year during lockdown. Got power almost up to max but onboard charger would not charge!
Thinking of selling now as certain someone could get it back to a great bike if they know what they are doing. It was amazing when I used her regularly to commute 20 miles every day.

Hi Mel, I received an email through this system from you on 17th Feb 21.

I see you're maybe looking to sell your Vectrix. I may be interested -
please can you send me details of the bike?

I have repeatedly tried to respond through the system with no luck so trying from here where I found a post from you.

I have 2007 Blue VX1 in Bristol UK. Tried sorting battery issue last year during lockdown. Got power almost up to max but onboard charger would not charge!
Now decided to sell it as certain someone could get it back to a great bike if they know what they are doing. It was amazing when I used her regularly to commute 20 miles every day.