So I am going to recycle all the old cells that are still good into a battery pack that will absorb my excess solar power and save it for a rainy day (Ha! Not in California) 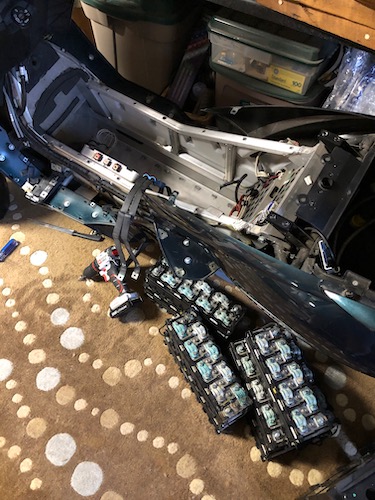 I took the batteries out and dismantled them into 6x 8 and 6x 9-cell packs, 12 original packs total. 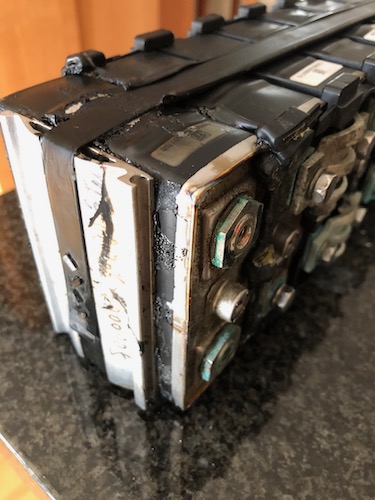 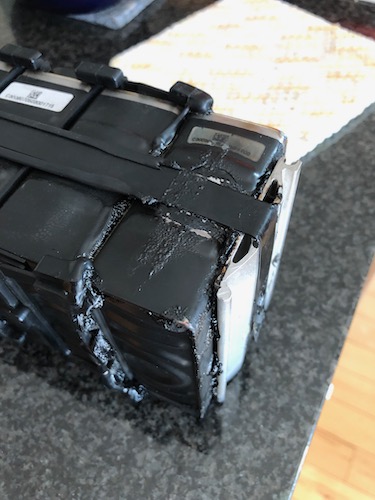 I found the reason my battery failed and it appears to be a single cell that totally melted down (above). I have run each of the other battery packs, including the one with the failed cell by-passed, and get between 25 and 28 Ah of power after charging the packs. Each of the cells give the same 2 decimal place reading after being charged and after being discharged. They all started dead from self discharge. That seems REALLY good.

So I am thinking I will use the cells and break them up into 10 cell or maybe 9 cell packs and hook them in parallel to a couple of RV battery chargers during the day as I have excess solar and thru an inverter at night to run my TV and such after dark... If I do 10 cells it will require creating a new mount for the batteries and getting them out of their packs, but that gives me a battery that is very similar to a 12v car battery. Can be charged to 16 volts and run down to 10 volts, my inverter likes that.

My RV battery charger seems to be doing a good job of keeping the voltages below 14.4v. So if I am careful I can use 9 cell packs, although that wastes 3 cells instead of 2, and I would have a battery that can be charged to 14.4 volts and run down to 9 volts, not that my inverter goes that low.

But the advantage of using 9 cells should be obvious, half of the packs already are 9 cell so I can reuse the big plastic container that they came in. For the other packs, I could take one of the 8 cell packs apart and marry one of each of its batteries to the 5 other packs and have leftovers, for at least the one burned cell on one 9 cell pack and that leaves me with 2 spares for future use.

Anyone have any great advice? 10 cell means less chance of overcharging, the great destroyer of NiMH batteries, 9 cell means I may finish the project before getting bored. Does anyone have advice on how to reuse the metal bands that hold the packs together?

I am not even sure HOW I will monitor the batteries to protect from overcharging. If I keep the volts below their max charge couldn't I just leave them charging whenever there is power? I guess that wouldn't charge them all the way so that's a waste.

OK, doing some research it appears that I need to charge using just the BULK charge stage. I'll have to get a single stage charger. In the mean time I thought I would put together the first battery and play with charging it.

After test charge cycling each pack I had checked that the cells were balanced in each pack and I used a resistor to connect the packs to each other to be sure there wasn't too big a voltage difference and then I just connected them to each other for a few hours to get them better balanced as a big battery. I had to do a little repair work on the two packs that had a bad cell each. I pulled the metal band around those packs and from one of the 8-cell packs for spares and moved some of the good cells to replace the bad cells. Then put them back together with GIANT 4' zip ties from Home Depot. It was weird the way the battery pack curled up when the pressure was off, and I couldn't get them back entirely flat with the zip ties. Maybe I should have used two 2-foot ties.

I put the 6 battery packs with 9-cells back in the original plastic carriers, and I wired the packs plus to plus and minus to minus. I reused some of the cables that originally came with the set to go from level to level. I made some cables by cutting up a cheap set of jumper cables and crimping on some 1/4" ring terminals to connect the two packs on each level and I used the jumper cable ends to attach the RV charger I have to the battery.

I have a discharge tester and ran the battery down tonight and tomorrow I'll do my first charge test. It's a lot of juice, cannot wait to see how much it takes. I have the battery monitor from Aliexpress to track charging: 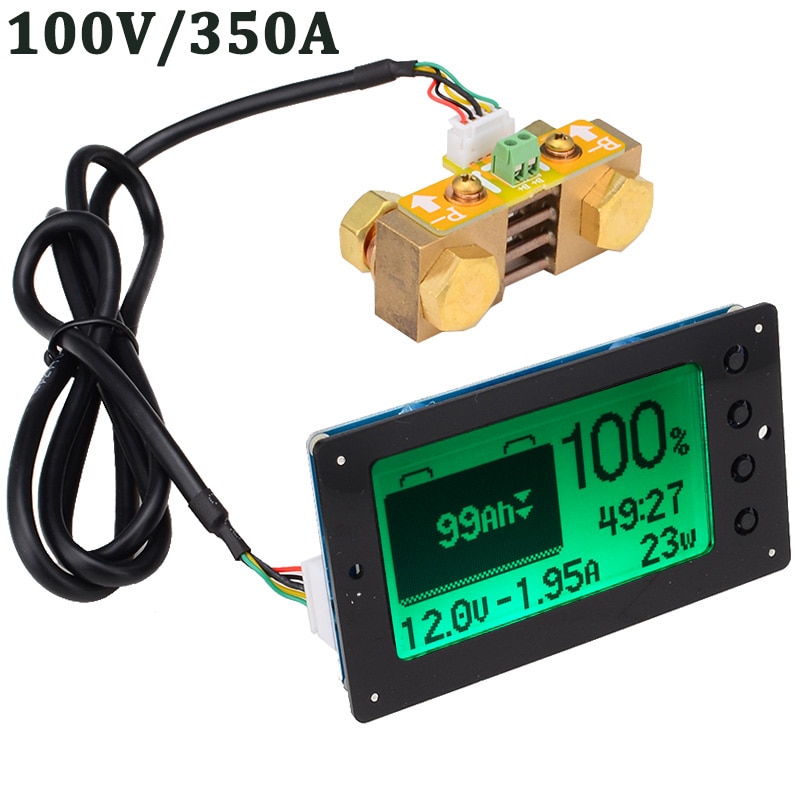 Use a BMS. You will thank yourself later !

I don't have a specific model to suggest, but one that displays the each cell (set of paralleled cells) voltage. Makes it sort of an early warning system so that you can maintain your pack closer to full capacity..... just my 0.02C...
Best Regards.

That would be nice. I don't know where to find a BMS that handles more than 20 cells, and also don't know ones that handle NiMH batteries.

So I will probably be doing it like the Vectrix originally did it. Do a slow charge (six amps in my case) to find the top of the battery and then track how much energy the battery puts out and then put back 115% of that. Occasionally do the slow charge again to see if I need to change the % I put back each time. I have a battery monitor that I was using for this in a trial setup that I think allows me to specify how much I put back each time to get to 100% w/o needing to recalibrate the display.

I do have lithium battery balancers but they won't work on 1.2v cells, they need more. I was thinking I might wire them in to every OTHER cell so it would be closer to a balanced charge. I also could buy little alarms that I could plug in to always watch the pack, but really I just need to make sure the pack doesn't get hot. I may just buy a bunch of temp monitors with alarm and call it a day.