In Blinking DeWalt charger I've been talking about a trouble I had getting my dewalt packs to be configured right. The short story is that one cell in each pack had read 0 volts, so I am trying to get those cells restarted, and at the same time am working on a new way to wire the packs in parallel.

The method is to ...e.g... take a 12 volt battery, connect it to the 0 volt cell, and try to get it to accept a charge. I've done this successfully a couple times. But with this one cell... well... there was a large BANG sound and excitement for a few seconds while I disconnected the battery leads, and brought the sizzling battery pack outside. 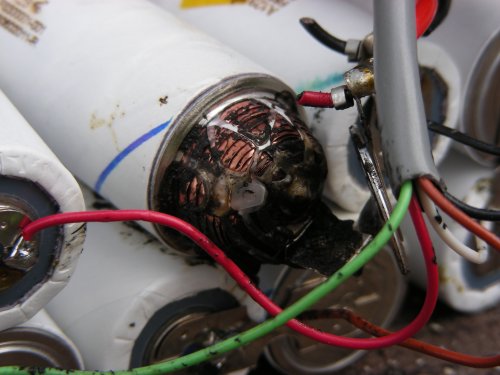 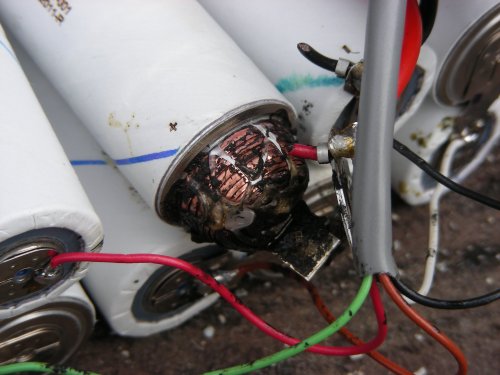 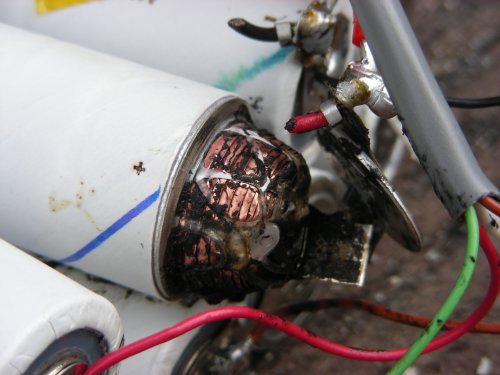 It's really interesting, actually. Only the one cell was affected. There were no flames or anything like that. The cell was hot, understandably. It spewed some black gunk on my dining room table, and made a bit of a smell. But no big deal other than this one cell that's obviously out of service. The cell might not have even been sizzling, but I threw that in for effect.

I just think the number of times you've blown something up or smoked something gives good experience. It actually defines where you are in the EV tech scale as a matter of fact. You have to blow something up or smoke something at least twice to graduate from an EV newb. I'm only kidding! Be safe, wear safety glasses and gloves please when "experimenting" or doing any EV work.

Have you been able to completely restore the dead cells?

I've nearly blown up NiCad packs doing close to the same thing. I found some old packs that had been dead for years could accept some charge after applying a high voltage and current. I was applying 48v from my motorcycle batteries to an 18v NiCad sub-C drill pack. They would make a hissing sound because of the gassing when I connected them. They didn't blow up but vented enough hydrogen and oxygen to cause a small flair up. Then I decided to call it quits. Was pulsing them for short bursts, and the current was somewhere around 20+ amps. The batteries didn't recover much, but would accept a small charge which is amazing after sitting completely dead for over 2 yrs.

Just recently I took a 6v lead-acid 2.6 ah battery labeled "gel cell" but actually being an AGM and cut the top vents off. The battery was dry as a bone so I added water and forced charged it at up to 60v. After about a minute it began accepting more charge and I dropped the voltage and eventually put it on a 12v charger for a few hours with a little computer fan to keep the area well ventilated. On a load test now it can put out 50 amps at 4v. The battery is God knows how many years old, and has been sitting completely dead for a very long time. This makes a great 6v battery for testing stuff.

You performed an extreme test. I guess LiFePO4 is the safest Li-Ion battery nowadays.
Check this out, you can see the comparison. http://www.phet.com.tw/Products/ShowMovie.aspx?unique_id=1.
Sony massively recalled the defective notebook batteries, because the results will be very serious. I won't surprise if consumer electronics' batteries move to LiFePO4 in the future. That might help cost down quicker.