I am leaning towards buying a used EVT 4000e, 2010 model. I have no idea if the asking price is reasonable ($1000) for a lithium-powered 2010 model with ~8100 KMs on the odometer. The overall condition is said to be very good. I don't know the condition of the brake pads or tires.

I am hoping someone here will be able to clear up a few things about this scooter.

1a. Any idea on the nominal output of this motor? Is it the classic 1500 Watt, or one of the slightly more powerful, newer ones?

I've no idea if anyone even reads this corner of the forum.

No need to worry about no-one reading this corner of the forum. I would guess it's not just me who as a standard clicks on the Recent Posts button up at the top. This way we get to poke our noses into all that goes on here, even in the more obscure corners :-)

However, sorry, no EVT expertise here...

Well, I am an expert on EVTs, unfortunately not on the newer models but as far as I know they started with brushless motors in -09. They should also be 12 inch instead of 10, so it should be easy to check, not shure about the effect though.

It´s possible to ride 2 people (in Europe it´s approved for this) but the scooter is quite small so it´s not very comfortable for western people of average height.

Johnny J, thanks so much for your reply.

The 2010 EVT 4000e I went to see does, in fact, have a brushless motor, but I forgot to check the wheel sizes. I did notice that the rear wheel had a lower profile tire because of the bigger brushless hub motor (bigger than the brushed hub motors, as I understand).

After about three hours of calls to insurance companies, I finally found one that took the time to listen to my description of an electric scooter in the 50cc class of scooters. Most insurance company agents are so uninterested in doing anything outside what they normally do, it's astounding. I, for one, enjoy a change from the everyday!

Well, I may have this scooter by day's end.

So, I went ahead and bought the thing. Rode it 25 KMs home in 2º C weather without incident (although I was freezing by the end of it).
After charging it up partially for a couple of hours, I couldn't wait to take my girlfriend for a ride. However, within two minutes, disaster struck:

I decided to test the scooter's hill-climbing ability with a quick jaunt up a short, steep hill. Ten meters up the hill, all of the lights went out and the scooter stopped accelerating. I was in Power mode with the throttle at almost full, going about 25 KM/h. I'd estimate the batteries were around 75% charged. Two of us riding with a combined weight of about 130 kg.

I pulled over and braked to stop us from rolling backwards down the hill. I waited a few seconds with the key in the Off position. Then I turned it to On. Nothing. Tried again a minute later, still nothing. Walked the scooter home (~10 minutes), then tried the key again. Still nothing.

Plugged in the charger (the charger has two lights, a yellow/green light and a red light). The red light comes on right away, then goes off a few seconds later. Then the yellow light for one second, before changing to green. The batteries definitely need a charge, but the charger doesn't seem to be providing power.

I am completely new to this scooter, so I don't know where to check for fuses. After about 45 minutes of checking it outside in the dark, I managed to locate two fuses. First, a blue 15 amp fuse behind the front access panel--fine. Then a yellow 7.5 amp fuse under the right-hand side panel, near the controller--also fine.

*** Does anyone know what is going on? Did I destroy something with that little hill-climbing test? I find it hard to believe that I did. Is there a heavier duty fuse somewhere that might have blown? A thermal breaker of some sort? The O.H. (overheat) light never came on.

Anyone here with experience or knowledge of the wiring? A wiring diagram, perhaps?

I only have wiring diagram for the older models, but since you have no power at all it seems like either there is a fuse that´s broken or a battery cell that´s given up.
I don´t know if there is a BMS connected to the batteries and if the power is controlled by this, in that case that could be broken.

As you say, you really need more info on how things are connected.

I pulled the two battery boxes from the scooter. One box is slightly taller than the other.

I checked its voltage via the Anderson plug: 28.5 V. Does this suggest that the battery has a good charge in it, and that it is connected in series with the other box to produce ~ 57V?

I checked the voltage via the Anderson plug: 0.00 V. Nothing. Does this suggest instead that this battery is dead? And that the above battery is at a dangerously low state of charge?

There are about 12 or 14 small screws holding each box together. Do I dare open them up for further analysis?

Alright, I went ahead and opened up the battery box that was giving a reading of 0.00 V.

Inside there are 12 units, presumably 3.7 V each (?). They are wired in a mixed parallel and series system, so that each battery box produces one half of the nominal 49.4 V system. That is, there are six cell pairs making a nominal 24.7 V.

At the end positive terminal is a fuse of some sort. It is bolted on either side and wrapped in heat shrink tubing. Voltmeter readings from after the fuse show 0.00 V, and 24.4 V from the actual battery terminal.

So, I believe I have found my problem. Now my new problem is finding one of these special fuses for sale somewhere.

Good that you found the problem, nice work!

phase-boy - yes, still riding my 2008 EVT that I purchased on Ebay for $900 as a "new" closeout in 2009. Is an SLA brushed model and the original batteries are still going strong! Check out my eval from a couple of years ago at: http://www.wikipik.org/evt-4000e-electric-scooter-reviews/v2c16p8. Can't help you with Lithium questions as I am STILL waiting for them to wear out. So keeping SLA's charged and charging them immediately after riding has worked for me. The EVT quality of construction was excellent. I now use it to silently terrorize campgrounds and run errands. Here is a pic of it almost ready to travel on back of my antique RV. Take care of it and it will be your Energizer Bunny!...

Update - SLA's finally gave out. Pulled them and installed gee-wiz 40aH lithiums. Conversion wasn't cheap or easy to do but it was considerably less $ than a new Lithium powered EVT-4000e. Make that $2K less! Yes, Bravo Electric Vehicles are still being sold. This upgrade has totally changed the whole personality of my scooter. Having shed 90 lbs, it leaps ahead of traffic and can stay ahead all the way up to 35 mph, with a top end that hits 40 mph. Range is now in excess of 50 miles (pack is set to shut down at 30% of capacity to keep from "bricking the pack"). I no longer have gas scooter envy. In fact I wouldn't want one! See my post elsewhere on this forum for more pics. It is so awesome having a "new" scooter!! 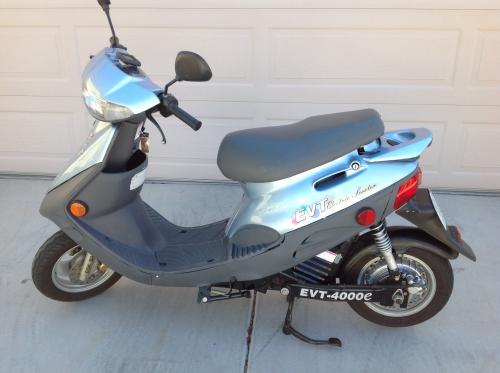 Any still check this forum? I have a 2008 EVT-168. Anyone know any good sources for parts? I need a few items, though most places I look online seem to be out of business or non-responsive. Any help is appreciated!

Hey DS. Rarely check but VVV emailed me there was activity. Still riding my 4000e and the lithiums are holding up fine. If you haven't already, check out my conversion write up HERE. As to parts - besides new tires haven't needed any. Suspect parts specific to EVT's are getting extreemly rare & hard to find. Thankfully tires, brake pads, rear view mirrors and such are common. Got my tires/tubes at BikeBandit. Have you tried Bravo? Their website is still up. They answered the telephone a year ago and their Scottsdale AZ office was still open back then. Haven't checked lately. Canadian Echodrive is also still up. Both have 2015 copyright updates at the page bottoms and that is a good sign. Lastly, have you tried the manufacturer (www.evt.com.tw) directly? Found this email address: willam.chang [at] evt.com.tw. Good luck and please post if you find a source for parts!

Hey NoGas! Thank you so much for responding. It's too bad these scooters didn't get the amount of traction they needed to really take off. Though it seems like they did fairly well. Not sure why everything seems to have died off. Your writeup is awesome. I recently bought a EVT-168 with the lithium package. The batteries are definitely tired though so I tried to source some. Not responses from the manufacturer that made them. Then to make matters worse, after just 3 rides and around 7 miles on my newly acquired scooter, the throttle controller spring just snapped, so my throttle just doesn't work. Trying to source just that spring or even the controller unit has proven impossible so far other than just buying another scooter for parts. Being just a spring, it's very frustrating since it's such a nothing part but absolutely necessary. To make matters worse, when I was fiddling around with the throttle stuff somehow the scooter thinks there is insufficient energy now. Luckily the guy who sold it to me is taking it back and even luckier still, I found a 4000e that seems to be in pristine condition and will be taking a look at it this week and if all checks out bringing it home. Again, thanks for responding. Hopefully we can get more of the community involved. These are amazing scooters and no reason why they should just die off.

Dear Johnny, may i know what is the best model you will sell in Europe ? we want to make a new EEC approved whole escooter for EU market? thanks in advance ! 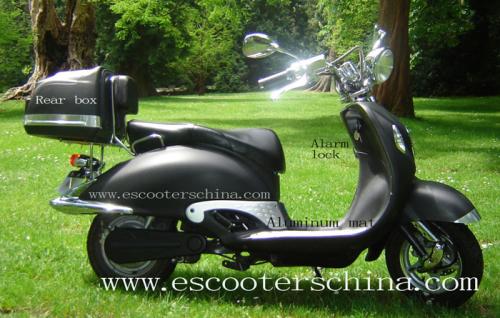 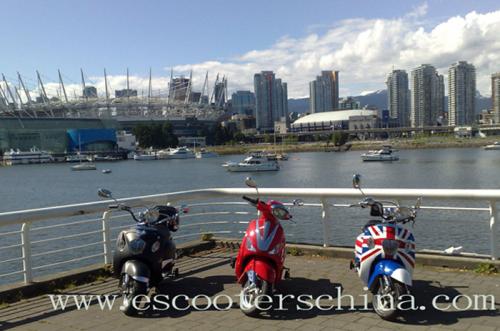 I just bought an EVT 4000e from 2002. The controller is broken, some of the IC:s have "Popped the top" so it doesnt work anymore.

Do anyone know where to find a cheap replacement?