In the fall I picked up a 2007 VX-1 and decided to make it a project. I thought if I couldn't get it running off the existing batteries, I was going to do a Nissan Leaf conversion, or similar. I have built several batteries for electric kick scooters and have a good sense for the general principles, so how hard could it be? Right?!?

When I picked up the bike I didn't notice any kind of smell but it was cold out and I was focused more on what I could see vs smell. I moved and once I put it in my garage and turn a heater on, that's when I noticed it.

The trunk was saturated in pee and smelled like an old litter box. The mouse droppings confirmed what the source was. I took out the upholstery and rinsed it down and finally neutralized the smell with hydrogen peroxide and baking soda. The power cord also reeked of urine so I wiped that down as well. So far so good.

I was able to get a charge on the batteries with the method described at Dead Vectrix What is First. I was even able to move back and forth a bit within my garage, it works!! So far so good.

Unfortunately, when I plug the bike into the wall socket, I get no signs of charging. No fan, no lights etc. I confirmed there is continuity between the power cord and the charger ports. Reading the various posts, I assume there may be an issue with either the temp sensors or the charger itself.

The suggestion I read was the pull the temp sensor boards and see if it charges. So, I cracked open the battery section thanks to Antiscab's youtube video, it was fairly easy! This is where I discovered another home for mice. 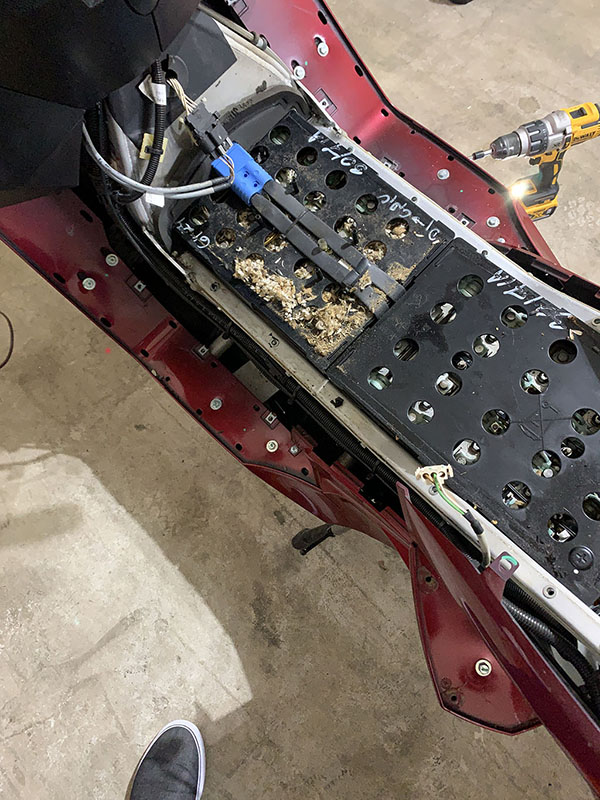 I vacuumed out all of the remnants, thankfully not finding any fried mouse carcass in the process. I pulled back the cover and noticed that one of the tiny boards attached to a cell was scorched. I assume from shorting via mouse pee. Is this a temp sensor lead or related to the BMS? The temp sensors I have used are much smaller than this. Can these boards be replaced? If so, where can they be sourced? 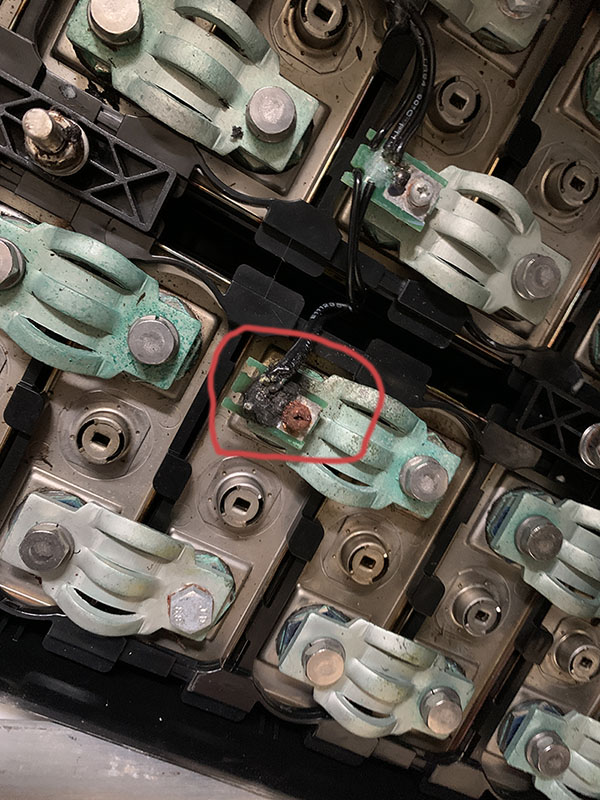 I did disconnect the temp sensor boards and it didn't make a difference, still not charging.

Any thoughts on how you would proceed with this one would be appreciated. Not sure if I want to continue with the mouse house fun or just replace the batteries. The bike does run otherwise.

Hey Mike,
I'm Dave in the UK.
I have a set of the temperature sensors/boards/cables - make me an offer for them? Not looking for much.
There is an (expensive) PEAK community interface that allows you to connect to the bike via the 9 pin D-type connector in the left glove box. When connected, it will tell you the cell voltages. You will need around 100 volts on the pack for the on-board charger to see them and supply a charge.
Pity about the mouse pee!
Dave.

Thanks Dave. I have a USB/Canbus adapter on order. I will us it to test further. I am not sure if I want to invest in the current battery pack or replace it, leaning towards the latter at the moment.

Hi, ensure main battery voltage is around 110v-120V dc, if its lower internal cpu's charger may not turn on. With USB adapter and programer, you will be able to upload old program that ignore battery sensors. Check that charger receives DC and AC power. There's a buse in MC that if blown, charger does not receive DC, you'll need to restore it if it is fused. What charger type do you have?

Thanks for your thoughts. It's an ESD charger. The general consensus is that the charger is dead. I will keep testing though.

. I am not sure if I want to invest in the current battery pack or replace it, leaning towards the latter at the moment.

if you are "leaning" don't hesitate with the battery upgrade - you wont regret it. (( those Nimh's can be troublesome ))
Just about any type of Li battery (40Ahr or more) will give you increased performance and better reliability.
You wont have to search very far on this forum to find many upgrade examples.

I find the Vx-1 is a fun ride with a resilient battery. 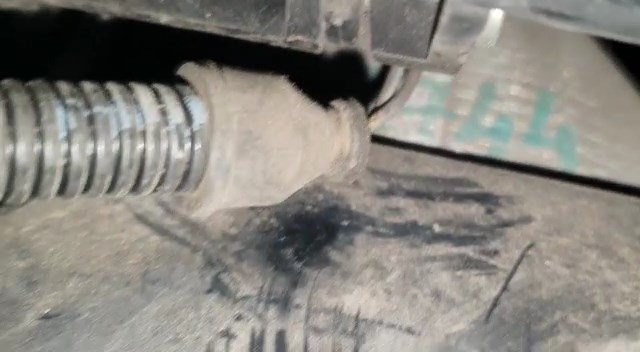 Is this a temp sensor lead or related to the BMS?

Here is pic of the temperature sensor converter board. There are two such boards (one with white wires one with black wires): one for the front pack and one for the rear pack. Each board has attached 6 temperature sensors. Each sensor monitors one of six battery modules in the respective pack. Each pack is comprised of 6 modules (front pack has 8 cells per module :: rear pack has 9 cells per module). 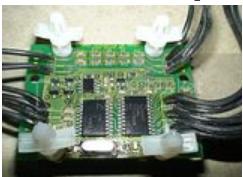 Can these boards be replaced? If so, where can they be sourced?

I am sure the little board can be replaced (( just a couple of wire solder connections )); the trick is finding the exact replacement.... but that is if they are used in your upgrade. The NTC resistor is easily sourced at your favorite electronics parts supply vendor. I used this one: Mouser PN:594-NTCS0805E3103FMT (these are 10Kohm, 1% Negative Temperature Coefficient NTC Thermistors, RoHS Compliant); however, any equivalent will do.....
As for a source: I believe MosfetMeltdown offered up a set in post#2...

I still have mine from my Lithium upgrade. Not sure what to do with them, but at least one is bad as I was unable to charge the bike until I removed the temp sensor board.