I started setting up my bank charging system.. i've got a 48v ev, & a 60v coming, so i wanted to be able to charge either bike with the same chargers.

I picked up 5 vector 2/6/10's, some powerpole connectors, crimpers & started putting it together. Here's what i have so far: 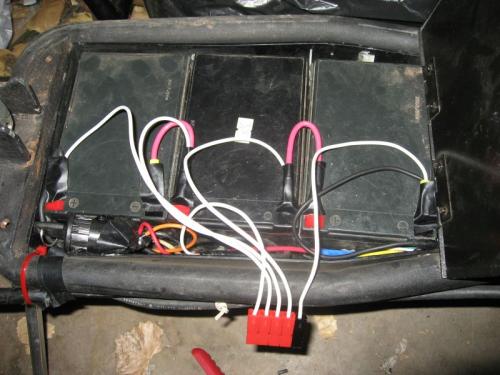 I had been wanting to rewire some of the series connections, so i got some 10 ga stranded wire, crimped some connectors on, & put a length of 18ga wire to go to the chargers. I crimped an anderson power pole to the other end of the charger wire.

there are 4 batteries in this bank.. the other is out of sight in a mount under the seat.

the middle charger connectors go to both the positive of one battery & the negative of the other. I put a black power pole connector on the negative terminal of the end battery, but the powerpole connectors will only go on one way, so that really isn't necessary, but it does give a visual of the connections. See astar's bank charging circuit in this forum for the wiring diagram.

I'll hook the chargers up the same way, with the negative of the first charger on the black, then the shared connectors the rest of the way, & the last positive on the end.

What is nice about this is the ability to easily add another charger if i need it, or rotate then a little, or just charge certain batteries. It is very flexible. 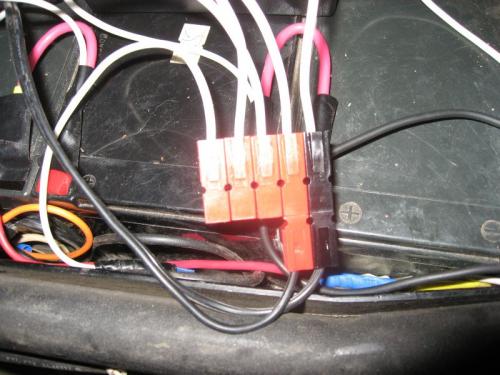 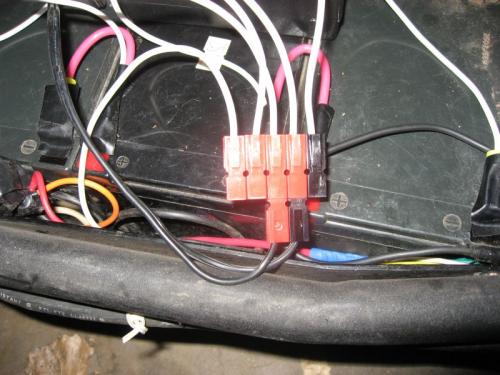 If i only have one charger, i can charge them up by moving the plug down the line until all are charged, or i can check the voltage of a single battery. 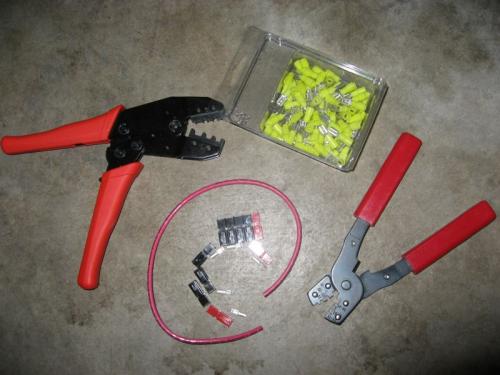 It's pretty easy.. i picked up a cheap crimper at fry's electronics that does the powerpoles (pretty necessary because of the way they click into the housing), & the other crimper does the insulated terminals.. i think it came from harbor freight.

I haven't got all the chargers set up yet.. still trying to figure out the best mounting setup.. i probably won't make it very portable with 5 chargers.

But with this, i can plug the 5 chargers into the 4 battery bank, or a 5 battery bank.. it could even be used for 1 or 2. The powerpole connectors are cool the way they hook together, they are made for thousands of connects/disconnects, are pretty cheap, & color coded. I think a crimper is the secret for working with them.

I finished my bank charger Thursday night. I followed the wiring example posted here a couple of months ago. I used 6 Black & Decker 2/4/6 Amp chargers. It worked great on the first try. I watched it closely with the Pak-Traker.
I am kind of impressed with how it works. I also followed the recommendation of nother poster to remve the back of the charger and place them back-to-back. By removing the backs, it takes up half the space. It's funny, the way they are laid out and numbered, it reminded me of the firing order for a V-6 ICE ;>) 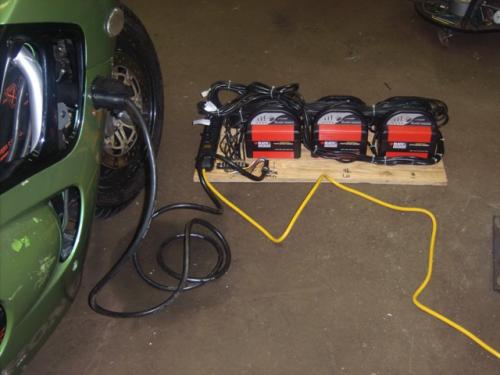 My connection is a 9 pin trailer connection I found on E-bay. I use 7 wires now, and can add one more if I choose later on. 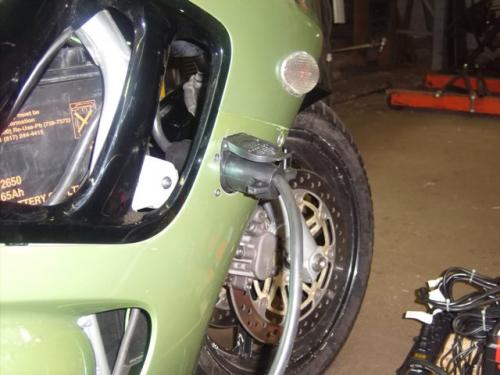 Good luck with yours! I like the flexibility you have designed into your wiring. It seems you have several options available for even emergency charging.
Nice job.

Looks good, Mike. I like the weather proof plug you have. Makes it an easy, plug & go. I've got to make mine simple too.. i want my wife to be able to ride it in, plug it in & forget it.

There is one problem with my vectors.. you have to turn them on each time they power up. Do yours do that, too? This means you have to go & turn on each charger individually.... not a big deal, but it is another step. I plan on checking the battery voltage before charging each one, anyway, so it's no problem for me, just pushing some buttons.

When i get my xm3k i'll figure out the best way to wire the charging plug up. I'll probably keep the string charging capability, just add the bank charger connection.

I also wanted to be able to add some solar charging features in the future.. having space for the collectors is the problem!

I took the vectors apart.. they're pretty simple, & maybe if they weren't being maxed out, you could skip the fan, or put them all together in a single box with one fan. But i'm lazy, too, & will probably just take the backs off & set them up on a board. I'm not planning on carrying it around much, anyway.

Thanks Scott!
Yeah, I have to turn on each charger individually also. Just something I'll have to deal with. I thought of disassembling them further also. But for now, I wanted to be able to put them back together incase I have to return one due to a failure. So until I have used them for a while I won't modify them any further just yet.