Here is some wiring diagrams that may help you out. Scroll down to the bottom of the link and you will see them.

It would be helpfull if you add pictures of where the wires go, not only the connectors. I can't tell what that third wire connected to the battery functions as.

Hi Dave, the 3 pin battery wires are all coming from the controller. I'm sorry, I thought I made that clear in the original post with photos. I spoke with a guy at TNC that said the third smaller wire can be either omitted, or spliced into the second red wire and the connector changed out to the two pin battery connectors they sell.... which I had already done (omitted the wire & used a two pin battery connector).

The guy at TNC also confirmed that I was able to omit the gray wire from the throttle as mentioned above because that only operates the LED for a throttle that has one... mine does not. He confirmed what I had already guessed here too, I had swapped the four pin connector for a three pin one and omitted the gray wire.

He said the brake plug would not work with a key switch so I can't use it for that.

If I wanted to use the key switch, then I would need to splice it into the battery connector wire. Otherwise, if I didn't want to use the key switch at all... then the bike would always be "HOT" unless I unplugged the battery connectors when not in use. The draw back to this is that the bike could take off if the throttle is accidentally bumped. =(

So, I've confirmed that everything is wired correctly... but the bike doesn't run. As mentioned my previous post,all I get is the "click" noise as described.

I have no idea what else to do, and I don't know anyone locally (other than the guy that already screwed me on this deal) that does custom set ups. I'm out the $195 he originally charged, the $65 in court fees to get my bike back, the $30+ spent on the controller & stuff at TNC and now I'm tapped.... got no money to throw at it for a while now. Guess I'll just peddle the bike as it is until I can figure something out.

Don't omit that red wire. You need it. I don't know why they told you you didn't. Maybe not all controllers that have it do.

Anyway, it's the power tap for the logic board. Without it, the FETs and caps inside the controller can get power, but the circuitry can't. The result is that it just doesn't work.

I don't actually know why manufacturers use this wire, because it's kind of a stupid thing to do when it's basically an extension of the bigger power wire, one that could just be part of the PCB in the controller. (Makes for easy modding, but still kinda dumb.)

I spliced in the red wire... no change. But thanks, must be something else thats wrong.

Again i dont see why the brake connector couldnt be used as a key switch. Yes the controller would always be hot still consuming power but it would render the electrical parts of the bike useless. The brake connect kills power to the motor. Meaning no throttle response when you apply your brakes so you dont stall the motor. Which prevents a speedy get away but not theft. It would just have to be wired up back wards so that when you turn the key on it takes the brake off and when you turn it off it cuts the brake on.

Hi, I do have everything wired correctly including the added spliced red wire that you guys suggested.

I don't know how to test the battery or the motor so I feel like I'm stuck here.

How do I wire the brake connector "backwards"? I think, in order to do that, I would have to know which key wire is hot and which isn't. There are two wires, an orange one, and a yellow one with a white wire spliced into the yellow wire. The break connector from the controller is a two pin set up with a black wire and a red wire.

My Batteries are 12V 17ah/10hr types. Where would I find replacements? Do they sell something like this at scooter stores? Too late to call as they all close at 5pm around here.

Ok, thanks to a PM from Reikiman, I was able to test the motor and determine that it works just fine. I even held it there for some time (just one battery even) and it ran a while without getting a drag or anything from the battery. So now it's something to do with a connection somewhere…. but everything is connect exactly like everyone told me to do it. I'm so confused. =(

This is how my wiring is set up. The little yellow boxes are the connectors. The key is not connected and the "brake" is the only connector that remains available on the controller.

The little gray wire attached to the yellow on the key set up is actually white. I don't know which wire is ground and which is hot. 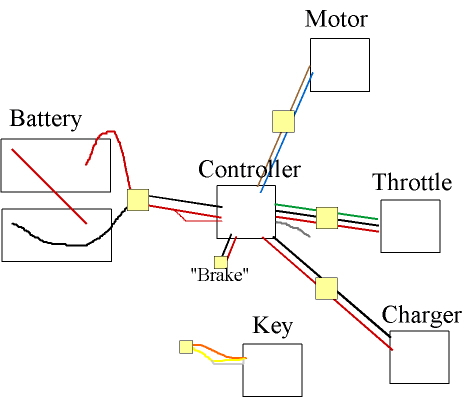 Well, I'm going to hope it's not the controller and suggest one more test:

Remove the throttle, and short out the red and green wires. The red is the positive wire, the green is the signal. Shorting them out looks like full throttle to the controller. If it runs, you have a bad throttle. If it doesn't, the controller's dead.

(Sorry if this has been suggested before; I haven't read all of the posts in detail.)

Link means connect the two wires. Have the wheel off the ground when you do it of course.

I'm sorry guys, but I need a little more detail on the throttle test...

Connect the red & green wires and then do what? Touch them to the battery? The motor? Can you provide step by step directions please so I don't do something wrong?

take apart the connector for the throttle , straten apaper clip , stick the wire ends into the black and green terminal's , make sure the wheel is of the ground , The wheel should run full speed ! you can also jump around the connector and not hurt anything LaTeR

One more thing ...
What did you do with the third small wire that was connected to the battery connector?
is it just dangling? does it go to the controller?
A photo of the controller would be nice.

Hey, if you’re going for cheap, try finding someone who is handy with electrical stuff, get a double pole, double throw switch, 20 amp rating, with center position, off. Wire the batteries so that they are in parallel when the switch is down, center is off, and up is series. Wire it all with 10 ga. Ignition wire, and put in a 30A automotive fuse on the plus side of each battery, and mount the switch on the handle bar. Cable tie the wires, and leave slack for steering, done. It will buck, will not start smoothly, but you said cheap, right? Try finding a high school or community college that has an electronics class, and approach the teacher, it should make a fine class project. I will be in lake Placid next week to get my condo ready for sale, perhaps house cleaning, painting for barter?

How about hooking the key in series with the small red battery wire running the controller, would that work?

It'd still be drawing the leakage current of the capacitors (and prolly FETs to a lesser extent), but whether the caps have enough of it to be a problem if the thing is sitting around for a few days, I don't know.

One more thing ...
What did you do with the third small wire that was connected to the battery connector?
is it just dangling? does it go to the controller?
A photo of the controller would be nice.

I spliced it into the bigger red wire like someone suggested above. It didn't make any difference in what resulted when I twisted the throttle though.

Well, I'm going to hope it's not the controller and suggest one more test:

Remove the throttle, and short out the red and green wires. The red is the positive wire, the green is the signal. Shorting them out looks like full throttle to the controller. If it runs, you have a bad throttle. If it doesn't, the controller's dead.

(Sorry if this has been suggested before; I haven't read all of the posts in detail.)

The throttle worked fine when I performed the test suggested above. Thank you to everyone who explained in further detail on how to do this... sorry that I required so much explaination.

As it turned out, I took everything apart, double checked my wiring, tighted things, purchased new batteries with this weeks check and hooked everything back up. I'm not sure what it was, but I am now up and running and a danger to my community... Just what we all set out to accomplish. =)

I have a new question, but I'll go ahead and post in a new thread since this one is so full. I don't want to combine a bunch of stuff together. Thank you everyone for ALL the help!