Bicycle towing with an Xtracycleized bike

Okay, I have a broken bicycle and I wanted to bring it to REI for replacing the fork (see: Aluminum forks can BREAK!!) and the simple easy obvious normalthink way of bringing a broken bicycle to a repair shop would be load it in the car and drive it over to the shop. Who would ever think I was normal?

As always when it's time to drive the car I start thinking - can I avoid burning the fuel? I concocted a crazy idea to tow the bicycle using my other bicycle. That is, I have an electric bicycle with an XtraCycle attached to the back (see: My latest e-bicycle project is now up and running (very fast)) and it's quite useful for grocery shopping and other around town cargo needs. Maybe it could be used to haul the bicycle over to REI, which is a measly 1.5 miles away or so.

As a former tow truck driver it felt, um, interesting to be reusing that knowledge on a bicycle.

The XtraCycle has a pair of panniers and loose nylon carrier thingies on the side. The method was to prop the first wheel in one of the panniers and use various tiedown straps and bungie cords to hold the bicycle in place. The real trick would be whether the towed bicycle would trail along nicely behind or whether it would drag around. I took a pair of the straps I use to haul the motorcycle, and cinched them down tight between the handlebars and the XtraCycle frame. For good measure I attached three bungie cords between the frame and the rear and of the XtraCycle frame.

Took it for a short test run down the street and it handled itself beautifully. So I took a few pictures and then headed down to REI. By the time I got there the bike had shifted so it was leaning slightly but came through very well and was still pretty darn secure.

I was grinning from ear to ear the whole way thinking this was a crazy thing to do and surely everybody seeing this was going WTF. Actually it seemed that people barely noticed. Oh well. 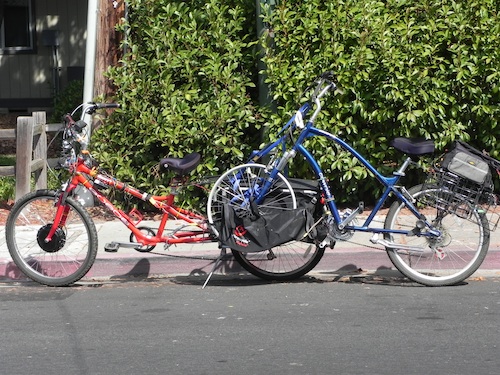 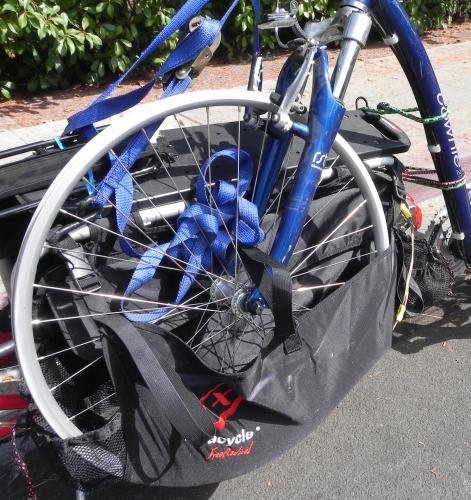 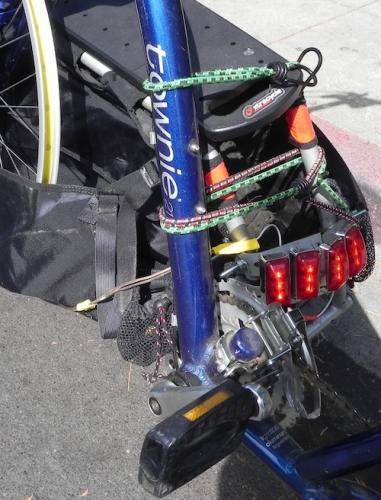 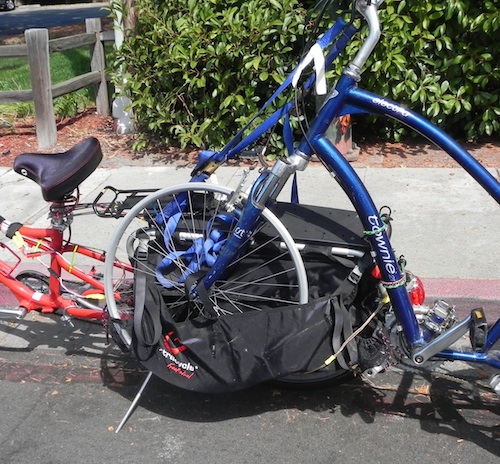 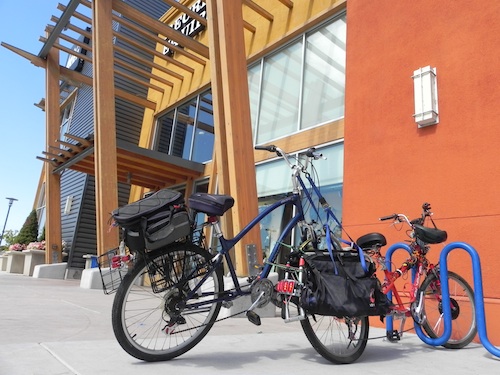 That's awesome! I've thought about trying that with my Mundo cargo bike. Thanks for blazing the trail and proving it works. I thought the front fork would have to pivot but you tied the whole thing down.