a Danish company is offering a product called "Battery Optimizer" which basically does the same as a Powercheq, but has better specs: it can transfer up to 5A and keeps the batteries within 10mV difference, instead of PCs 75mV.
Details here: http://www.powercharge.dk/link.asp?menu=16&submenu=34

A German dealer has tested them and now sells them for 49 Euros, about half the price of a Powercheq!
(Believe it or not, but Powercheqs are sold for 99 Euros = $135 here! :sick: )

I have not tested them personally yet as I already have PCs in my EVT168 and eGo scooter, but I consider buying some for another EVT scooter that needs new batteries anyway.

` Skarrin,
Thanks, the link seems to go to a blank page, and is it possible to translate the specs for us?

Sorry that link worked for me yesterday, don't know what got messed up :O...
Please try http://www.powercharge.dk/default.asp?lang=en -> Products -> Battery Optimizer

` :?
Skarrin, still not working, get to Products, but there is no Battery Optimizer listed just 4 pictures.

Here is a translation of the data given at this Page(http://www.solar-mobil.de/neu/batteryoptimizer.shtml) (only in German language):

Powercharge Battery Optimizer is a real progress regarding battery balancing since it's
actively balancing and maintaining batteries which are connected in series.
The optimizer which is both effectively and easy to use, is balancing batteries while they
are charging, discharging and while they are in resting state.
The optimizer itself is working as a active construction which is transferring energy from
the best to the worst battery in order to balance the whole system.
(This process is taking energy and some limited engery losses are accepted for balancing the system)
The optimizer works with all serial connected battery systems, regardless of how many batteries are connected in series,
also is easy to handle and install.
The achieved results for such a balancer are recorded by independent tests, it is
proven that characteristics like lifetime and capacity of batteries are enhanced noticeably.
Enhancement of capacity:
For serial connections the capacity of each single cell is highly depending on the capacity of the weakest cell.
The Powercharge Battery Optimizer therefore is compensating the batteries.
Improving the battery lifetime:
The lifetime is improved when things like overcharging and undercharging are avoided.
While the optimizer is compensating the risk of incorrect charging processes is minimized, hence
the lifetime is improved.
Constantly balancing:
In contrast to regular shunt regluators the Powercharge Battery Optimizer is working
in all three conditions, charging, discharging and while the batteries are not in use.
Reduction of engery loss:
Powercharge Battery Optimizer is an active balancer, the energy between batteries is transferred
with minimum wastage. Ordinary shunt controllers do simply transfer energy to heat.
Modular designed:
Powercharge Battery Optimizer is constructed in a way to work with all serial systems, regardless
of hwo many batteries a system is using.

Hope this is something helpful, for any further translations please do not hesitate to ask!

`Trillian,
Thank you, see you at the next Moderator Team meeting. :) 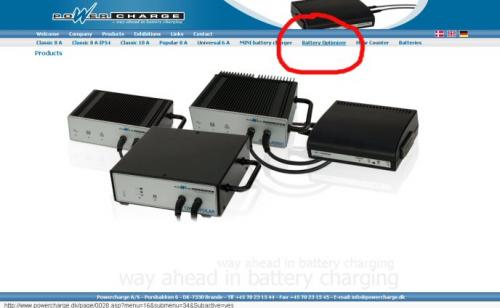 This is the Products page, as I see it.
At least with my browser, Firefox 2.0.0.6.
In the middle of the red circle, there is a text link called "Battery Optimizer".
(The red circle doesn't really look like a circle, but I can't do better at 1:30 am.)
This direct link may also work: http://www.powercharge.dk/0028/0028/default.asp?menu=16&submenu=34&Subactive=yes
Hope this helps, finally.

`:?
Thanks, the link still went to a blank page, but fellow Moderator Team Captain Trillian had already translated it for us. Only the word Battery shows on my Firefox, but we finally located it at http://www.powercharge.dk/default.asp?lang=en 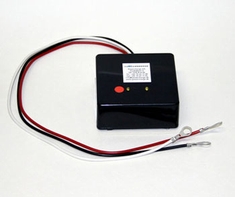 Powercharge Battery Optimizer is a new innovation within battery balancers, which efficiently equalizes and maintains batteries in series-connected strings.
The Optimizer, which is both efficient and easy to use, equalizes the batteries during charge, discharge and idle mode.
It is an efficient design, which allows equalization to be accomplished by transferring energy from the strongest battery to the weakest, with minimal energy loss.
The Optimizer can be used on all serial battery systems, irrespective of the configuration, and is easy to install.
The efficiency of the equalization technique has been documented. Independent tests show significant improvements to both the life of the battery and its capacity.

Energy wasted minimised
Powercharge Battery Optimizer is an efficient equalizer which transfers energy between batteries with minimal energy loss, unlike standard shunt equalizers which dissipate excess energy by converting it to heat.

Modular design
The Powercharge Battery Optimizer is designed to be used regardless of the number of batteries in the string.

Powercharge Battery Optimizer is constructed in a way to work with all serial systems, regardless
of hwo many batteries a system is using.

It looks like these function in a similar manner to powerCheqs. I am a little confused about the listed 24v battery voltage. This could mean these are designed to work with 24v batteries, and maybe those are more common in that part of the world?

The 5a is very impressive though. Lets say you have a "middle" battery in your string that is very weak, then it could have two units to transfer energy to it (if these are wired the same way powerCheqs are) than thats 10a, and 20a of balance difference. Quite a lot to help a weak battery out in a situation where it is severely dropping in voltage at end of charge, which could boost range significantly.

If these are not linked somehow to share information, than they will have some of the same limitations as powerCheqs. From http://www.evsource.com :

Note: Certain battery string configurations are not compatible with PowerCheq modules, or produce less effective results. These include long battery strings (12+), strings with long cable leads between separated portions of the pack, and battery packs used in conjunction with high current output chargers.

I just had an idea; I don't see why you couldn't put powercheq units in parallel doubling the balancing current capability.

Extended battery life
The life of the battery is extended as both over and undercharging are prevented.

It should be noted that these don't prevent anything. They can help reduce the risk of overcharging and undercharging, but if they are like powerCheqs than they are definitely not like the BMS systems used on lithium-ion packs which do prevent undercharging, overcharging, and too high a discharge rate. However to do that you need a way to disconnect the batteries from the string, or switch off the pack as a whole, and that means something to disconnect the load-carrying circuit. These equalizers don't appear to be able to do that, and neither can powerCheqs.

I am a little confused about the listed 24v battery voltage. This could mean these are designed to work with 24v batteries, and maybe those are more common in that part of the world?

No, that just means that one unit is designed for two 12V batteries, exactly like the Powercheq.
And the limit of 36V (18V per connected battery) sounds way off at first, but is doable if you use a high current charger on old sulfated batteries. Been there, done that }:) .

Sorry that didn't sound right; I'm not in any way affiliated with powerCheq or any of its distributors. You could put 3 or 4 in parallel to get even more balancing! J/K

So the undervoltage cut out is 10v on these, which seems to be an improvement over the 10.5 on the powerCheqs. I'm no expert on battery balancing, but I don't see why it shouldn't balance lower than that. If you drain SLAs real quickly, you can safely take them down to 8v or lower, but the voltage might dip well below 10.5v/battery during high loads anyway, and this is when you most need the balancing.

It may be that it takes the voltage input to power the unit across two batteries, in which case it will function until the batteries are at 5v each.