The Vespa 50S Special originally had a 6V 15W headlamp. The old lens was partially obscured with overspray from past rattlecanning, but the previous owner gave me a brand new headlamp when I bought the scooter from him.

I figured it would be a good idea to check the function of all the major components, so yesterday I hooked up the motor, controller, contactor, throttle, and one of the batteries. I have not yet purchased the main power cables, so I had to make do with whatever spare lengths of monster cable and bits of 18 ga wire salvaged from previous LED and cold cathode lighting projects.

The Rezistor - a little progress

At this point I have all the major electrical components for the drivetrain: motor, controller, batteries, contactor, and throttle. I also have two 12V voltage converters for lights, horn, and other stuff, and four LED bulbs (replacements for low-voltage halogen bulbs, actually) that I'm going to put behind the old headlight lens. Not DOT-certified, to be sure, but should be the equivalent of at least 40W to 60W incandescent. I think the original bulb was only 15W anyway.

The Rezistor - batteries are here

The two 36V 20Ah battery packs arrived yesterday. Pretty fast shipping, considering they shipped from China on Thursday. (sunglasses in the photo are for scale) Sam at YESA was able to have them configured two different ways so I can fit one (barely) where the gas tank was and the flatter one in the left cowl. I think I'll separate the BMS circuit boards and put them in the gas tank area where they're better shielded from the weather. 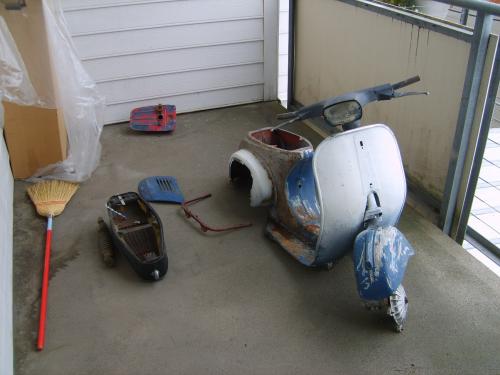 The project has begun! Might as well blog as much as I can.

A friend brought over the Vespa 50S frame last weekend. The purchase also a new front fender (nice!), a new horncast (plus the old one), a new headlight, the seat, rear shock, engine access door, and both 10" wheels, including hubs, brakes, rims, and fairly worn tires. He also gave me the gas tank. Maybe I'll turn it into a trophy for one of my club's future rallies.

Electric Scooters Up to 1500 Watts

Electric Scooters Up to 1500 Watts

A couple months ago I found an old Honda Elite frame available for real cheap on Craigslist. I'd just gotten a motor from deafscooter when he was clearing his garage for the trip to China, and was wondering what to do with it. This motor was said to be 48 volt, 4000 watts, and so this Honda Elite frame seemed like the perfect thing. It came already stripped, and when I picked it up the guy turned out to be an EV person himself. His daily driver is a Solectria Force and this Honda Elite was something he'd converted to electric years and years earlier, but he wanted to get rid of.

The end result is that both German and Chinese partners in the original e-max line of scooters treated their USA customers and dealers unfairly and unjustly. As a result of the German and Chinese business decisions, and possible international fraud they may have commited, the US personal EV market will remain limping from this very sore breakup; I suspect for quite some time.