My E-Bike experiment started two years ago while recovering from back surgery. I spent lots of money on crazy gadgets that I didn’t need while I was home on disability. Many of the stupid things I bought turned out to be a big waste of money but the E-Bike was not one of them. The E-Bike retrofit kit has turned out to the best purchase that I’ve made for a variety of reasons.

First, I needed the exercise of bicycling but don’t like climbing hills or overexerting myself. In other words, I’m a fat lazy guy that would rather have an electric motor powering my bicycle than my legs. I still get a little exercise starting from a stop and climbing small hills. The more energetic I feel the more I’ll pedal.

Second, the E-Bike saved me from buying another car for almost a year. The E-Bike may turn out to be the best and most convenient way to get back and forth from work on days when it’s not raining or too cold. The second reason turned out to be the reason why the initial expenditure of $300 was well worth it. I’ve since spent another couple hundred bucks on chargers and batteries. This $500 compared to the payments on a car, insurance, gas, wear & tear costs is a fraction of what I would have spent in a year commuting to work. Even though my work is not far from home and I could walk for free, the E-Bike is a convenient and fast way to get across town.

The biggest problems that I’ve had with the E-Bike have been related to the batteries. I’m now considering a more expensive replacement for my heavy SLA batteries. The problems that I’ve had with the batteries are as follows: Because the three 12V 10Ahr batteries weigh over 30 Lbs., the load on my bicycle rack is heavy enough to break the screws that hold the rack to the frame and I’m constantly retightening and re-securing the battery pack to the bicycle rack. A lighter Ni or Li based battery in a triangle between my legs on the bicycle frame would work much better for the bumps and jumps getting around town. After a few months, my 36V charger stopped charging the batteries properly. I bought all new batteries and ended up buying three separate 12V chargers which seems to work better to cycle the batteries. I got a medium 6A charger without a float and it caused two of my SLA batteries to expand and melt down. The casing spewed forth hydrogen sulfide rotten egg smelling gas all over my apartment. Now, I know why they say to charge the batteries outside. Smart chargers with a float that maintains the battery after reaching full charge is the right answer. After spending a couple hundred dollars on SLA batteries and various chargers, I’ve now got three batteries that work well, a backup set of three batteries and the three 12V smart chargers that I use to keep the batteries topped off all the time. At work, I use the 6A charger to boost the batteries between trips. It’s a hassle to always be connecting and disconnecting chargers but the only way I could make this easier is by spending a bunch more money that I’m not ready to spend yet.

I have learned quite a bit about battery technology, wiring 12V batteries in series and considered getting a job with a company that deals with fuel cells. Since new forms of energy production and storage are going to be the next new frontier of technology. Recent innovations in battery technology, the demand for electric cars and price of gasoline is forcing this technology forward. Soon, we will have fast charging batteries that can propel our E-Bikes with more and more extended ranges that may even cost less than the ones that we’re buying now. Unfortunately, for now, the E-Bike market isn’t big enough to get good battery development moving. We’ll have to pick up the pieces after GM and some other companies try to make their electric cars more efficient. It looks like one of the best batteries to use for now based on weight, range and cycle life is either a NiCAD, NiMh or Li battery. These batteries are very expensive and because the technology is new, wasting money on something that’s not proven is not a good idea.

My dream E-Bike is a little faster and goes a little farther on a charge than what I’m currently using. I’ve done some research and a good 48V faster hub motor and controller along with a good set of NiCAD batteries with a smart 48V charger that I can cycle 1000 times, will run me a little less than $1000. I think I’ll use the tax refund, that the government is borrowing money to pay me, for this next purchase.

Right now, my E-Bike propels me around town at 15-20 MPH since I’m a big guy and those batteries weigh a ton. I figure with 48V instead of 36V, lighter batteries, and maybe loosing a few pounds as my current batteries get drained, I’ll be able to get twice as far, twice as fast. Maybe I won’t get twice as fast, but possibly a little faster and farther than my cheaper setup.

The U.S. law has capped the E-Bike speed at 20MPH as a legal limit but I know now, after reading many testimonials online, that people are going to 48V and 72V with faster and faster hub motors. I’ve seen some youtube videos of people clocking over 40MPH and without any resistance over 50MPH. I can imagine that with larger permanent magnets and more voltage from longer lasting lighter Li batteries that people will be pushing the limits of what is safe with a complete disregard for the legal limits.

After reading somewhere online that somebody boosted their BD36V to 48 Volts and it worked just fine, I tried the higher voltage out with my E-Bike. WOW! What a difference. The max speed is just about right for my bike at 25MPH. The range is a little better. Four SLA batteries weigh a ton and I’m probably going to destroy something with this much weight on my bike, but for now it’s a lot of fun. I’ve reinforced the bike rack holding four 10 amp/hour batteries stacked in a 2x2 cube. The batteries are strapped to the rack with three nylon straps and a strong bungee cord. My bike takes quite a beating at higher speeds over railroad tracks and bumps in the road but it’s a mountain bike that was originally built to take some abuse.

If you enjoy that feeling of wind in your face all the time like your riding down hill on the flats, the strange looks that you get passing people that are peddling their tail off and the lack of maneuverability like your riding a heavy motorcycle, then this is definitely the invention for you.

Re: My E-Bike Experiment

If anyone was interested in this story, here's my grungy E-Bike retrofit kit on my old Klein mountain bike. 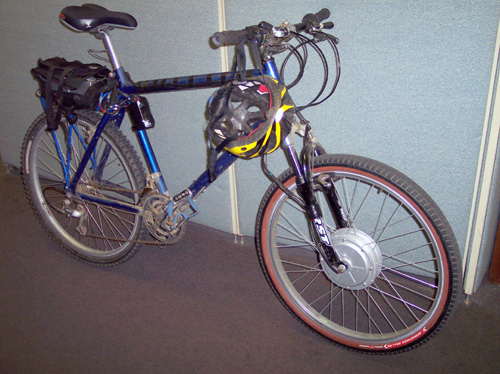 Re: My E-Bike Experiment

We’ll have to pick up the pieces after GM and some other companies try to make their electric cars more efficient.

Well this is why GM isn't doing so great anymore as to why they have had several GM motor company Lay Off's.
They have lost so much money that they have continued to make new cars and they can't even sell the ones they have.