OK - so I've ridden my XM-2000 about 100+ miles now. I've taken it to work and back (24 mile round trip) a couple of times. It cruises fine at 40mph - but it takes too long to get there. Up hills it drops to around 30mph. The stretches of 50mph limit road are where I start holding up traffic - oh well! I always ride close to the side and don't much mind if people squeeze past.

I let about half a dozen people at work ride it. I did a little "show and tell" - most of them were impressed - of course there were lots of wise cracks about long extension cords. ;) The facilities folks at work were kind enough to run me an extension cable so I ride 12 miles, charge all day and ride 12 miles home. It definitely is a lot more peppy on a fresh charge. As I understand it Li-Ions don't "sag" as much as PbA - as one site puts it "your 50th mile is as good as your 1st" - yeah, and at $2000 for batteries it had better be!

I also paced it against a 150cc scooter. That really showed how much acceleration I'm lacking. I could live with a 45mph top speed if I could get there a bit quicker. Yesterday on the way home the circuit breaker tripped (I'd been riding WOT for a long time). I just pulled over, switched off, reset it, powered back on and was on my way back home.

I decided to take it apart and get to the batteries. I followed kringles excellent [node:1426] (thanks Chris!). Here's a pic of mine dismantled that shows the chain of batteries:

I don't know if you can make it out but the string of batteries are numbered. 1 is bottom front, 2 is the one on top center, then 3 is beneath it, then 4 is the one up by the back rack and back down to number 5 at the bottom row of three.

Taking mine apart I found that more bolts were overtightened than loose. All in all though the exposing of the batteries was easy (although not easy enough for a quick battery change!). BTW, the batteries have two strips of "sticky white stuff" on the bottom and it took quite a bit of force to free up battery #2. 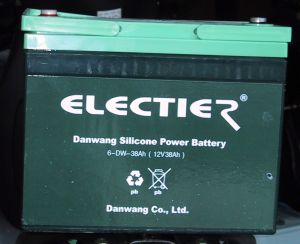 The dimensions of the battery are approx 8 by 5 by 6.5 inches. I'm going to turn battery #2 90 degrees and either put a spacer in so I put it directly on top of #5 or shift it forward by an inch or so. That way I think I can reclaim more usable storage space. My guess is they didn't do this because it was easier to cut a hole in the bottom of the existing storage and then put in a new "false" floor - rather than making a new mold for a different shaped storage compartment.

OK, so then I decided to attach the PowerCheqs. First I went and crimped on a new set of connectors - a better size for the smaller battery terminals. Then, carefully following the instructions I went battery 1 +ve, battery 2 -ve, battery 2 +ve. BANG! FLASH! FLAMES! (I kid you not!). User error :( instead of +ve 2 I'd connected battery 4's +ve cable... DOH! :( 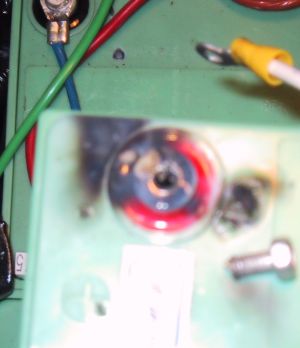 The little meltdown was enough to melt the battery terminal (and put deposits on the bolt). The battery still reads 12.8v so maybe I didn't kill it? Tomorrow I'll get some form of tap (or is it die?) and try and re-thread what's left of the terminal. I probably fried the $60 PowerCheq though. I guess I'll find that out tomorrow as well. Hey, you live and learn, right?

Update: I got a tap and a new M5 0.8 bolt and was able to reconnect everything and it all still works. I don't know if this will have shortened the battery pack life - probably. Next up is fitting those PowerCheq *really*, *really* carefully this time...

Isn't it amazing how quickly metal can vaporize when you short circuit a battery...!!!!?!?!?