Brilliant! Thanks for your ultraswift reply. It's had a couple of 8 hour charges, but I'll use a timer from now on, until I get the sensor issue sorted. Currently in Hants UK, so I'll get onto Steve Scott to see if he can source some new sensors, if it comes down to it.. I've tried searching the forum for what/where they plug in, but guess the best thing is to have a ferret around under the plenum cover & employ a little common sense. Any flapping couplings would suggest they didn't get reconnected after the charger installation.
Many thanks, Matt

you only really need the timer for the couple of days after the red battery light.

the rest of the time you can use the timer to prevent an equalisation charge, but thats really only useful in weather warmer than ~24 deg C.

The sensors would only be unplugged if the batteries were removed from the bike. 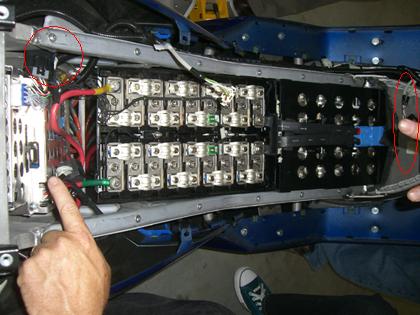 Careful with these "Temperature Sensors". They are more than that: The rear temp sensor board also has direct and un-fused connections to Tab 1 and Tab 103 of the battery. That means it has the entire battery voltage across two pins on that board and is potentially lethal!

I saw CALB now make a 70Ah cell in the same format as thudersky's 60Ah cells.

Means my next pack will give me even more range :D

interesting to note that all cells are rated at 1C now, after several hundred cycles (so if you discharge a brand new cell at 70A you get 75Ah).

a massive improvement on the cells from yesteryear.

CALB cells: Recommend Charging-Discharging Current(0.3C,A) 70 A nom - ONLY 18A recommended!!
The peak discharge of the vectrix, 200 A, will kill this cells at fast pace...

you would think so,

The real question is by how much.

This is not actually my first pack, so I can already tell you how long it will last.

at 1.5C continuous with 5C peaks for acceleration large format LiFePO4 cells lasted 22'000km in a bike where you only had 40km range.
That pack is actually still in service in someone elses scooter, it was at 60% of original capacity.

There are reasons why 60Ah cells in a Vectrix will do better than this (and the new 70Ah cells will do better still):
The cells do better at high discharge rates now than they did in 2007.
most notably capacity then was rated at 0.3C, where as since last year capacity has been rated at 1C continuous, after ~300 cycles.

The continuous discharge rate at 110kmh on a Vectrix on the flat is ~80A, less than the 1.5C I abused my original pack with.

I have sometimes seen 100A continuous while climbing a hill or fighting a head wind at high speed.

When you are travelling slower, the discharge rate is vastly lower (around 0.5C at 80kmh).

the peak discharge rate of 220A is less than 4C.

I'm presently at 12'500km on my LiFePO4 pack, and have experienced no capacity reduction.
I have 100km range (on most discharges) meaning I have only reached ~125 equivalent cycles.
only completed the conversion in May last year, so it will be roughly May 2013 by the time I hit the ~50'000km thats equivalent to what my old pack gave me.

Its a shame it takes so long to see the improvements in the cells service life.